President Obama's Climate Action Plan aims to reduce carbon emissions; prepare the U.S. for the impacts of climate change; and lead international efforts to fight climate change and prepare for its impacts. Bill McKibben, 350.og co-founder, responded to the talk positively, stating: "It's awfully good to see the president starting to move forward on climate action--after the hottest year in American history." 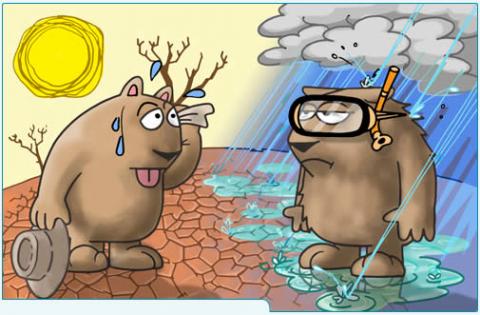 BIG NEWS.
President Obama just finished his first major climate speech to the country -- and he said things that NOBODY expected.
In his speech, the President drew a line in the sand on the Keystone XL pipeline: if it significantly increases climate pollution, he won't approve it. And in a move that made me jump for joy, he gave a shout-out to the growing fossil fuel divestment movement.
The other policies he laid out were, for the most part, steps in the right direction. Ending the ability of power plants to emit unlimited carbon pollution, investing in clean energy, preparing for climate impacts, and reengagement in the international climate process -- these are all huge victories for the climate movement.
This was only possible because of the movement that we've all worked together to create. Our fossil fuel divestment campaign has caught fire. In February, we worked with our allies to hold the largest climate rally in US history to tell the President to move Forward on Climate -- and now he really is.
Right now is a critical time for us to up the ante -- we're aiming to raise over $100,000 in the next 24 hours to expand our campaign to stop Keystone XL and spark a huge push for bold climate action. Click here to chip in.
One thing is clear after the President's speech: our fight just got bumped up to a whole new level. The fossil fuel industry is already taking to the airwaves to attack the President's climate plan -- and they're going to fight even harder for the Keystone pipeline.
The President said that the pipeline could only be approved if the project doesn't "significantly exacerbate the climate problem." We all know that Keystone would do exactly that, and the nation's top climate scientists are unanimous in describing the pipeline as a major threat to our planet. But we don't want to celebrate prematurely -- the President did leave himself some wiggle room to approve Keystone. The State Department hired big oil contractors to write their report on the pipeline, and they said it wouldn't 'significantly' increase emissions. Their arguments have been picked apart by journalists, scientists, even the Environmental Protection Agency -- but there's still a chance the administration could hide behind this weak analysis.
In the coming days and weeks, we'll put your donation to work. We'll expand our efforts to make sure Keystone protests greet the President at all his public events, work with allies like CREDO Action on the KXL "Pledge of Resistance," and continue to wage an online, media, and grassroots campaign against the project.
The speech wasn't without its missteps. The President announced loan guarantees for so-called "advanced" fossil fuel projects, and gave shout-outs to natural gas from fracking. On the whole, the plans he laid out weren't nearly ambitious enough. The truth is, the President alone can't deliver the type of real climate action we need, like putting a price on carbon. Keystone XL, fossil fuel divestment, and our other campaigns are building a grassroots movement to end Big Oil's stranglehold on Washington -- and now is the time to ramp them up. Click here to support a bold grassroots climate movement.
I'm writing this letter from Istanbul, where our team is here with 500 youth climate activists from all over the world for Global Power Shift -- the first ever convergence of its kind. We watched the speech huddled around laptops and jumped up and down when we heard the parts about Keystone and divesting.
350.org started in 2008, while President Obama was still just a candidate -- and we all hoped that one day he might be a political leader who would rise to the climate challenge. Today that challenge is more urgent than ever, our movement is stronger than ever, and the President's speech has given us a new glimmer of hope. Game on.
Onwards,
May for the whole team at 350.org
[May Boeve is Executive Director and Co-Founder of 350.org.]