Marriage Equality and Beyond

It is true that marriage equality is a real step forward for LGBT folks and is a real change in American and global perceptions of non-heterosexual sexualities. This is no small thing. However, another problem is that there seems to be a failure to understand marriage equality as part of a strategy for expanding our understanding of family and community. What exactly are the next steps in redefining those terms to be more inclusive? 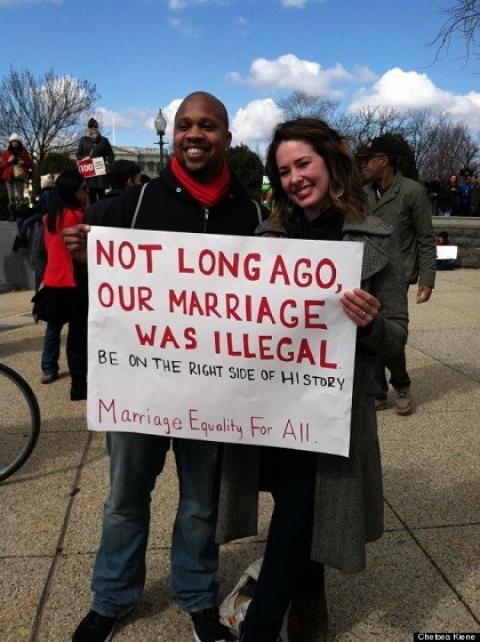 In a 5-4 ruling on DOMA, the court found that DOMA is unconstitutional as a deprivation of the equal liberty of persons protected by the Fifth Amendment.[1] The decision in Hollingsworth[2] that the plaintiffs had no standing is also a step forward, but does not go so far as to ensure that marriage equality is available everywhere in the United States.

Arguments in the case were heard in March, less than a year after President Obama announced his support for marriage equality and amidst what seemed like a tsunami of declarations of support from (mostly) Democratic senators and a swift reversal of public opinion. To someone who has been involved in the struggle for LGBT rights for 40 years, the speed of this recent change is astounding.

But despite what some LGBT folks and authors like Linda Hirschman (Victory: The Triumphant Gay Revolution) might say, I'm not ready to declare victory quite yet. That's not to say that I don't see this as a victory - striking down DOMA is a step forward, but the dissents by Chief Justice Roberts and Justices Alito, Scalia and Thomas, while not unexpected, suggest that we still have a ways to go. In addition, the decisions earlier this week on affirmative action, workers' rights and voting rights clearly indicate that civil rights are far from universally accepted either on the Court or in the United States.  For gay men and lesbians some real gains have been made. Just five years ago no presidential candidate would support gay marriage; commentators now say that no Democratic presidential candidate in 2016 can afford not to support it.

How have things changed and what remains to be changed? Twenty years ago my partner, Judith Nedrow, was chair of the Domestic Partner Commission in Washington, DC. The task of the commission, appointed by the mayor, was to design legislation allowing public employees in same-sex relationships, and in other non-traditional relationships, to register as domestic partners. That legislation, and subsequent, more inclusive legislation, passed, but Judy and I didn't race down to the courthouse to register. We believed that the state shouldn't have a place in our relationship.

Fast forward 20 years and past a couple of health challenges. We decided it was time to have our lawyer rewrite our wills and other critical documents. At our first meeting, our lawyer said, "Well, you really should get married." Her reasons were two-fold: We were getting older and needed to ensure that our relationship was protected and, as she put it, getting married was now "the revolutionary thing to do."

Is marriage equality revolutionary? Well, the answer, as in so many things, is "it depends." To some activists marriage equality is the be-all and end-all of LGBT rights, but perceiving this fight in this way ignores the other issues facing people who identify as LGBT. If only on the civil rights front, there remain many barriers to equality: job discrimination, immigration reform, adoption issues. And, of course, marriage equality doesn't really address issues related to transgender discrimination.

Marriage equality does impact society's view of gender: 40 years ago one of the arguments used against the Equal Rights Amendment was that it would force gay marriage to be legal and thus remove any distinctions between men and women. Today the situation is almost reversed. Although gender is not directly debated in much of the discussion of marriage equality, indirectly it is central to it.

Marriage equality, however, is limited in its critique of the family and community. It still assumes a two-parent household with children, but the reality for many in the United States is far different from that. In All in the Family, Robert O. Self describes the idealized American family of the '50s and '60s as "[t]he white middle-class nuclear family headed by a patriotic and heterosexual male. . . ."[3]

The women's and gay and lesbian liberation movements challenged that supposed norm. Marriage equality by itself does challenge the norm, but only up to a point. As Scot Nakagawa points out, "Marriage is a conservative institution."[4] Nakagawa is one of many signers of a statement on Beyond Same-Sex Marriage[5] that says in part:

The struggle for same-sex marriage rights is only one part of a larger effort to strengthen the security and stability of diverse households and families. LGBT communities have ample reason to recognize that families and relationships know no borders and will never slot narrowly into a single existing template. All families, relationships, and households struggling for stability and economic security will be helped by separating basic forms of legal and economic recognition from the requirement of marital and conjugal relationship.

This critique gets at the heart of what is most problematic about marriage equality: it doesn't really acknowledge the diversity of families that has always existed. Sort of like the "breadwinner liberalism" of the '50s described by Self, marriage equality, by itself, makes assumptions about what constitutes a family and ignores community altogether.

I recall Vicki Starr, one of the women featured in the movie "Union Maids" under the pseudonym Stella Nowicki, describing rent parties during the Great Depression. People would gather together to help one another pay the rent. It wasn't a matter of family, but of community. My family/community is not just my blood relatives and Judy's, but my friend and her son and her "adopted" grandchildren, Judy's coworker (who thinks of Judy as her "other mother") and the neighbor down the block who drove us and our sick cat to the vet in a blizzard.

Unless we acknowledge these kinds of relationships as important, we fall into the trap of "breadwinner liberalism" even though the breadwinners may now be women as well as men. So I encourage readers of this blog post to sign on to the Beyond Marriage statement: http://beyondmarriage.org/.

But . . . I find myself disturbed by some of the rhetoric in both the Nakagawa article and the Beyond Marriage statement and by what is not addressed in them. For example, the full Beyond Marriage statement says, "LGBT movement strategies must never secure privilege for some while at the same time foreclosing options for many. Our strategies should expand the current terms of debate, not reinforce them." And Nakagawa says, "Also troubling is . . . that we are arguing to be able to use marriage as a shield against wrongs that no one, regardless of sexual orientation or marital status, should suffer."

Now, there's nothing intrinsically wrong with either statement, but in context they seem to ignore several things: the first is that marriage equality is a real step forward for LGBT folks and is a real change in American and global perceptions of non-heterosexual sexualities. This is no small thing.

The second problem is that there seems to be a failure to understand marriage equality as part of a strategy for expanding our understanding of family and community. What exactly are the next steps in redefining those terms to be more inclusive? It is not simply saying we need to be more inclusive, but rather identifying and planning for and working for concrete gains.

Nakagawa goes farther, almost suggesting that marriage equality is a backward step for the rights of some. That changing the law so that lesbian and gay couples can marry diminishes the rights of others who can't get the protection of marriage. He comments, "And when we argue that being able to wield this shield is a right we deserve because we conform with the values of good people, that shield can become a weapon against those who are still excluded." With that statement he comes close to saying that we should not support marriage equality because it may be used against the rights of others. But by that logic, the interracial marriage case of Loving v. Virginia should not have been brought because it might have been used to diminish the rights of gay and lesbian couples. Nakagawa certainly supports same-sex marriage, but arguments in his blog post are troubling.

What is missing from both of these articles and from much of the debate more broadly is gender. How can one talk about marriage equality without talking about gender? Tiffany K. Wayne[6] says "Marriage equality is a threat to those who do not believe in EQUALITY between the sexes in general. . . . Same-sex marriage makes a lie of the very foundation of traditional gender roles."  We have to infuse our work on family and community with a socialist feminist perspective. Without it, we will ultimately revert to some form of that breadwinner liberalism, where women are the caretakers of the family/community however it is defined.

Think, for example, of what marriage equality means in terms of the responsibility in families for taking care of children. When both parents are men, there is no woman to assume that caretaking role. What does that mean in terms of childcare in a country without universal childcare provision? Or if marriage can no longer be defined as being primarily for procreation, then what are the implications for reproductive rights? This, admittedly, is fodder for a longer post, but all of our work on issues needs to be infused with an understanding of their gender implications.

As Wisconsin Senator (and first openly LGBT Senator) Tammy Baldwin said after the decisions, "While this is a huge step forward for our country, the fight to make America more equal does not end with a Supreme Court decision. There is more work to be done to fulfill the promise of freedom and equality for all - in which America becomes a place where every family's love and commitment can be recognized and respected under the law."[7]

Christine R. Riddiough serves as a Vice Chair of DSA.