‘Restore the Fourth’ is aimed at restoring the fundamentals of the Fourth Amendment – the part of the Bill of Rights which protects citizens against unlawful searches and seizures. Participants will display an online banner which reads, “This 4th of July, we stand by the 4th Amendment and against the U.S. government’s surveillance of internet users.” 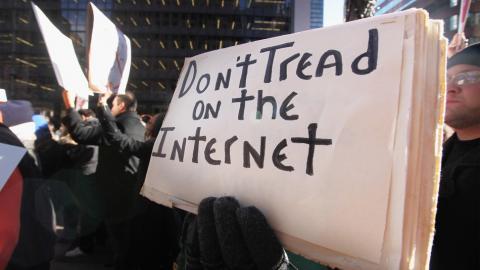 Thousands of websites will launch a July 4 online protest against the NSA surveillance programs. Reddit, Wordpress, and Mozilla will take part in the 'Restore the Fourth' campaign online, while live protests take place in cities across the US.

'Restore the Fourth' is aimed at restoring the fundamentals of the Fourth Amendment - the part of the Bill of Rights which protects citizens against unlawful searches and seizures. Participants will display an online banner which reads, "This 4th of July, we stand by the 4th Amendment and against the U.S. government's surveillance of internet users."

The campaign, which was spawned on Reddit, has the support of several privacy and press freedom advocacy organizations, including Mozilla, Free Press, the Electronic Frontier Foundation, the Freedom of the Press Foundation, and ColorOfChange.org.

The rally was largely organized by Fight for the Future - another non-profit agency which fights against internet censorship. The organization's co-founder, Tiffiniy Cheng, said in a statement that "the NSA programs that have been exposed are blatantly unconstitutional, and have a detrimental effect on free speech and freedom of press worldwide." The rally is expected to be Fight for the Future's largest online mobilization since its actions against the Stop Online Piracy Act (SOPA).

But the protest doesn't stop online. Organizers are planning live protests in dozens of US cities, including New York, Philadelphia, Boston, Washington, D.C., Los Angeles, San Francisco, Houston, and Atlanta. Doug MacArthur, a member of Restore the Fourth's national board and moderator on Reddit's r/news, expects between 10,000 and 20,000 people to take part in the protests in the nation's larger cities.

MacArthur stressed the need for the protest, largely because mainstream media is failing to adequately cover the NSA leaks and what that means for everyday citizens.

"I think if you are on social media right now and political blogs, this might seem like it's an issue that's all over the political blogs. But if you turn on CNN or Fox or MSNBC, you'll see that a lot of the more mainstream channels aren't covering this as much as you might be assuming. So I really think it's important we get more citizens aware of this issue," he said, as quoted by Mashable.

Free Press CEO and President Craig Aaron echoed MacArthur's sentiments. "We need to bring these government and corporate activities into the light of day, and the only way that will happen is if millions more people get involved and demand accountability, demand change, demand the truth," he said in a Tuesday press conference.

However, it's not just internet activists getting involved in the fight - one Hollywood celebrity has been very vocal in expressing his views on the NSA's surveillance practices.

"How long do we expect rational people to accept using terrorism to justify and excuse endless executive and state power?" actor John Cusack said during a press conference announcing the protests. "Why are so many in our government, our press, our intellectual class afraid of an informed public?"

Cusack, who is a board member of the Freedom of the Press Foundation, complained that many of those defending the NSA surveillance programs are focusing on supposed character flaws of former NSA contractor Edward Snowden instead of questioning the program's legality.

Harvey Anderson, senior vice president of business and legal affairs at Mozilla, agrees with Cusack. He said in a statement that the spotlight on Snowden is a "big distraction to avoid focusing on the invasions that have actually been occurring." The lack of transparency about the surveillance programs "undermines the openness of the internet," he added.

There has been a massive outcry against the surveillance practices since former NSA contractor Edward Snowden leaked sensitive information in May. In just three weeks, StopWatching.us has collected more than 531,000 signatures from people calling for Congress to fully disclose details about the NSA surveillance programs.

Snowden is currently held up in the international transit zone of Moscow's Sheremetyevo airport. He is unable to travel as his passport is invalid. Washington has issued an extradition order against Snowden, calling for international cooperation in returning him to American soil.

The whistleblower has so far made asylum requests for more than a dozen countries, with ten nations already denying him refuge. Venezuela says it will consider Snowden's request when it is received.

Find a protest in your area and join us!

Stop Watching US The revelations about the National Security Agency's surveillance apparatus, if true, represent a stunning abuse of our basic rights. We demand the U.S. Congress reveal the full extent of the NSA's spying programs.