Both sides may wave the Egyptian flag, which is red, white and black. The colour of khaki is no substitute 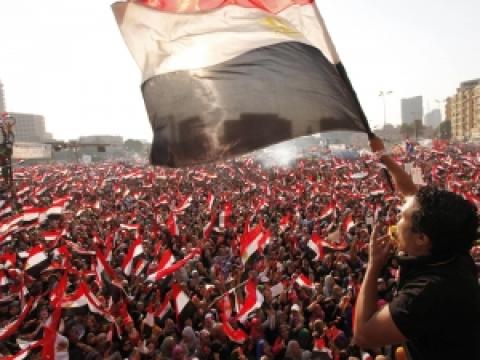 Protesters against Egyptian President Mohamed Morsi wave national flags in Tahrir Square in Cairo, Source: Reuters
The army's in charge. Call it a coup, if you like. But the Egyptian military - or the infamous "Supreme Council of the Armed Forces" as we must again call it - is now running Egypt. By threat at first - then with armour on the streets of Cairo. Roads blocked. Barbed wire. Troops round the radio station. Mohamed Morsi - at the time still the  President - may have called it a 'coup' and claimed the old moral high ground ('legitimacy', democracy', etc) but long before we saw the soldiers in the city, he was pleading with the generals 'to return to barracks. Ridiculous;  the generals didn't have to leave their barracks to put the fear of God (metaphorical or real) into his collapsing administration.
Morsi talked of shedding his blood. So did the army. This was grim stuff. Miserable was it to behold a free people applaud a military intervention, though Morsi's opponents would claim their freedoms have been betrayed.  But they are now encouraging soldiers to take the place of politicians.  Both sides may wave the Egyptian flag, which is red, white and black. The colour of khaki is no substitute.
Nor will the Muslim Brotherhood disappear, whatever Morsi's fate.  Risible he may have been in power, lamentable his speeches, but the best organized political party in Egypt knows how to survive in adversity. The Brotherhood is the most misunderstood - or perhaps the most deliberately misunderstood - institution in modern Egyptian history.  Far from being an Islamist party, its roots were always right-wing rather than religious, its early membership under Hassan al-Banna prepared to tolerate King Farouk and his Egyptian landlords providing they lived behind an Islamic façade.
Even when the 2011 revolution was at its height and millions of anti-Mubarak demonstrators had pushed into Tahrir Square, the Brotherhood was busy trying to negotiate with Mubarak in the hope they could find some scraps on the table for themselves. The Brotherhood's leadership never stood alongside the people during Egypt's uprising. This role was fulfilled by Egypt's strongest secular base - the trade union movement, especially the cotton workers of Mahalla north of Cairo.
Even Nasser's war with the Brotherhood was less about religion than it was about security; the leadership of the original Free Officers Movement found that the Brotherhood was the only party able to infiltrate the army - a lesson which today's Egyptian generals have taken to heart.  If the Muslim Brotherhood is banned again - as it was under Nasser and under Sadat and under Mubarak - it will not lose its support within the armed forces.  Sadat was assassinated by a non-Brotherhood Islamist called Khaled el-Islambouli - but he also happened to be a lieutenant in the Egyptian army.
Sayyed Qutub, the Brotherhood's leader, attacked Nasser for leading his people back into a pre-Islamic age of ignorance ('jahiliya) but the party was more exercised by Egypt's growing relationship with the atheistical Soviet Union. Qutub was hanged.  But persecuted, officially banned, the party learned - like all underground organizations with an ideology - how to organize, politically, socially, even militarily.  And so when real
The army, as they say, belongs to the people.  Mohamed el-Baradei, the former UN nuclear inspector and Nobel laureate and now opposition leader, told me during the 2011 rising that "ultimately, the Egyptian army will be with the people.And at the end of the day, after anyone takes off his uniform, he is part of the people with the same problems, the same repression, the same inability to have a decent life.  So I don't think they are going to shoot their people."
But that was then, and this is now.  Morsi may have adopted the pseudo-trappings of a dictator - he certainly talked like Mubarak on Tuesday, complete with threats against the press - but he was legally elected, as he kept telling us, and legitimacy is what the army likes to claim it is defending. In 2011, the 'people' were against Mubarak. Now, the 'people' are against each other. Can the Egyptian Army, the heroes of the 1973 crossing of the Suez Canal, stand between the two when they themselves now come - let us face it - from the 'people' on both sides?
[Robert Fisk is a multiple award-winning journalist on the Middle East, based in Beirut.]