Thanks to new technology, we know now exactly which microbes are crawling behind our ears, between our eyebrows, and especially on our feet. Kent Sepkowitz explains the gross new study. 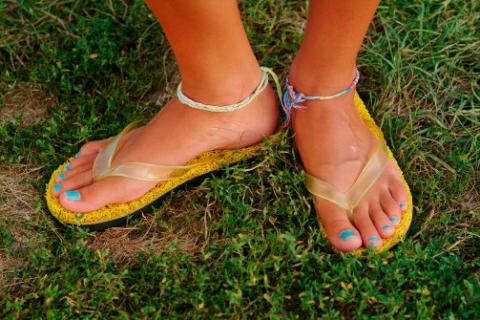 It is a truth universally acknowledged that a newly invented scientific doodad must, soon after its debut, be used for a study aimed at grossing out a large swath of the human population. For example, early on, the microscope was used to study pond water, which was teeming with paramecia; ether led to the theatrical display of amputations; and the CT scan revealed the humbling knobs and gnarls of our innards.

Now, this century’s most powerful new research tool, gene sequencing, has been dispatched to show us just how completely slimed our skin is with all manner of bacteria and fungi. Last week, an article in the prestigious journal Nature demonstrated in humorless scientific monotone the remarkable variety of fungi we have at various places along our body—14 spots in all, including the creases behind the ear, the toes, the heels, the glabella (that’s the spot between your eyebrows), and the inguinal crease. Yes, that inguinal crease. The authors were trying to understand just what might make a seemingly harmless microbe suddenly go rogue and begin to cause human disease.

True to form, the article is pretty relentless in its description of the “rich” and “diverse” “community” of fungi that inhabit our skin, making us sound like we’re a housing development or perhaps an assisted-living facility. There are dozens of different fungi in our ’hood, hundreds maybe. More on our feet than our arms, which might be reassuring—or not—but lots everywhere one looks. Turns out the fungi in our inguinal crease are not the same ones on our heel pad or behind our ear. Who knew? Furthermore, using a slightly different method to smoke out the hidden bacteria in the same 14 spots, it seems cutaneous communities rich in bacteria are fungus-poor and conversely, those awash in the fungus are relatively light in bacteria.

The fancy new technique used in the study, rapid genome sequencing, is only a decade or two old but already has revolutionized our understanding of health and disease. Until its development, our appreciation of the various microbes—bacteria and fungi—that inhabit our bowel and skin (and mouth and gums and hair and God knows where else) relied exclusively on the old agar plate, the same one you used in high school biology. You know the drill: take a cotton swab and streak it across your tonsils, then along the gelatinous agar moon and pop it into the incubator till tomorrow to see what grows.

It turns out though that about 90 percent of the living microbial junk in and on us can’t be grown by these 19th-century Louis Pasteur methods. However, we can figure out what’s there by working through the genetic DNA that is present, something along the lines of CSI: The Human Body. The trick is to use genetic sequencing, an über-high-tech approach, to translate the genes for each organism (the genome) into that most elemental vocabulary—Watson and Crick’s four components of DNA: adenine, cytosine, guanine, and thymine, which alternate infinitely in the twisting double helix to give us life.

Once a laborious process that took months, modern labs now can buzz through an entire genome in hours. After receiving a swab’s worth of material from, say, the space between your toes, a “sequencer” can detect and classify the gene sequences of dozens of different living things, symbiotes all, that are fully dependent on you and your dead skin and sweat and oiliness for nutrition. Yep, all the stuff the Clearasil pad missed is fertilizer for the flora carpeting your skin. And the flora is a thousand times more complex than we ever imagined.

Which gets back to the distinct yuck factor about this particular study. Fungi much more than bacteria have some sort of basic creepiness resembling that produced by Chucky and Friday the 13th and their progeny, vampires included: those almost comic, truly terrifying flicks that touch a nerve that can never be fully padded into numbness. Bacteria just don’t have the same pinch—sure, no one is looking to hear they’re crawling with Staph or Strep, but to see someone wince, tell them their toenails are growing a fungus.

The unease is of course fully irrational (just like fretting Chucky will somehow enter your actual life and butcher you), given the limited range of human disease caused by fungi, compared to the cruelty of the bacteria. Jock itch, yellow toenails, athlete’s foot, ringworm, and diaper rash account for most of the problems caused by fungi—at least in people with normal immune systems. Those and a few odd ones that cause regional illnesses such as Valley Fever (in California) or histoplasmosis (near various rivers) are all there is. Stack that against the terrifying might of MRSA and gonorrhea and superbugs and the other heavy artillery of bacteria—there’s simply no comparison.

As each new major scientific device shows us more unforgivingly the most disturbing part of our world, it also nudges us a bit farther into the periphery, emphasizing that we are just another nonvoting member of an infinitely complex, contradictory, and volatile web of living things. Ah, for the old pre-telescope days before Copernicus upset the apple cart and revealed that we were not the center of the universe. Perhaps, though, this is the true terror, the reminder that we too are but a speck in the wild world, nothing but an upscale fungus nesting in a greasy hair follicle. It’s enough to make a person scream.

Kent Sepkowitz is an infectious-disease specialist in New York City. He has contributed to The New York Times, Slate, and, oh-so-briefly, O magazine. He also writes academic medical articles that are at times pretty tough sledding.