Sing Out! Magazine's obituary for Toshi Seeger - progressive organizer, mother, filmmaker, gardener and wife of Pete Seeger, and veteran peace and environmental activist; 2012 interview with Toshi-Aline Ohta Seeger; appreciation from the Hudson River Clearwater - a living testament to both Toshi and Pete Seeger. 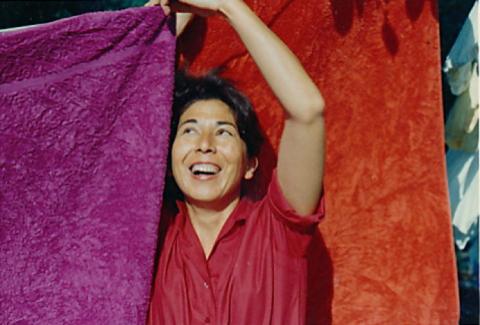 Young Toshi Seeger, Sing Out! Magazine / Gene Deitch
Toshi Seeger Passes
by Mark D. Moss
July 10, 2013
Sing Out! Magazine
Toshi-Aline Ohta Seeger, wife of folk music icon Pete Seeger, passed away overnight on Tuesday, July 9th. She was a mother, an organizer, an activist and filmmaker ... and an essential part of all of her husband's work. She was 91.
As much as Pete is a consummate dreamer and optimist, Toshi had a strength and brilliance that was at least his equal. There's was a true partnership. Without Toshi's counsel and support, and always outspoken and direct opinions, it's clear to anyone who ever met these two remarkable people that, without Toshi, Pete would never have had the foundation and freedom to do the work that made him so legendary.
But Toshi, despite her profound wisdom, strength, morality and courage, was also extremely modest and self-effacing. Often rebuffing attention paid to her, and always doing a loving job at making sure that Pete was always grounded and clear about how his work, his missions, were always bigger than a single man or woman.
Toshi was born in Munich, Germany, to an American mother and a Japanese father. Her parents brought her to the U.S. when she was 6 months old, as soon as it became legal for the two to be married here. They found an apartment in New York City, where her father found work as the building's caretaker.
Toshi grew up in a family of progressives. She went to the High School of Music and Art, and . After a few years of friendship, meeting Pete at square dances around NYC, Pete and Toshi were married in 1943, just before Pete was about to ship out overseas. She was age 21 at the time. Pete wrote in his autobiography that they "found we had much in common. Her parents were extraordinary people. We were all very close. Her mother, descended from Old Virginny (slave owners), had declared her independence from that racist part of her tradition, moved to Greenwich Village, married a Japanese who was in political exile, as militarists were taking over his homeland. He did important and dangerous work for the U.S. Army in WWII.
While he was overseas during the war, Pete and Toshi corresponded via letters incessantly.
In 1949, following the war, the two moved to Beacon, NY, where they raised their children Danny, Mika and Tinya. They built a cabin for shelter, and lived in that beautiful woodland mountain ever since.
Over the last decades, Toshi became a key leader and artistic programmer for the Great Hudson River Revival, the annual fundraiser for the Clearwater organization, and a true mecca for those of us who adopted Pete, and Toshi's, view that music could be a tool to help focus activism. She also played a pivotal role in Clearwater sloop voyages. Pete often sang her praises as an organizer: "after having to organize me for 66 years, no wonder."
Toshi's credits also included filmmaking, recording Texas inmates performing hard labor. The film, "Afro-American Work Songs in a Texas Prison," is part of the Library of Congress archives. Toshi Cooks Soup - Photo by Ed Renehan / Sing Out! Magazine
Pete's career became a consuming part of her life, and he spent many days away from the home. After being acquitted after the House Committee on Un-American Activities, Toshi had said "Never again. Next time no appeal. Let him go to jail."
But the two remained strong throughout the years. She took care of the home, always gardening and was a terrific cook, raising their children and making a wonderful home as Pete traveled the world making his music.
Toshi suffered from ailing health these past few years, and her trips around the Revival "campus" during the festival had stopped ... but the love and admiration we all had for this great lady was not diminished one sliver. She will be greatly missed ... and we send our deepest condolences to Pete and the rest of the family.
[Mark D. Moss is the editor of Sing Out! magazine, and has served as the executive director at Sing Out! since 1983.]
Toshi Seeger, wife of folk legend Pete Seeger, dies
July 10, 2013
Poughkeepsie Journal

Pete Seeger speaks with attendees at an event at Dia:Beacon April 11, 2013 to celebrate Pete Seeger's release of a new audio book. In the background is Seeger's spouse, Toshi Seeger, who died Tuesday night.
Poughkeepsie Journal / Karl Rabe
Toshi Seeger, wife of environmental activist and folk legend Pete Seeger, died Tuesday night.
Jeff Rumpf, executive director of Clearwater, said her death is "a huge loss for Clearwater and the world.
"Toshi is a real mother, a mother for social justice, a mother for festivals all over the world and people singing," he said. "She is a mother that embodies all the spirit your own mother does and spreads it out over the community. We're really going to miss Toshi."
Rump said Toshi played a pivotal role in the success of the annual Clearwater festival, which was held last month at Croton-Point Park in Westchester County. More than 15,000 people attended the festival and there were more than 1,000 volunteers. She was heavily involved in logistics and cooked for hundreds and hundreds of volunteers.
"She pushed for the festival being a cause not a concert," he said. "She made the festival happen. She is the mother of the festival.
"The most important thing for her was making sure the music represented as much diversity as possible," Rumpf said. "She was always looking for people to open their minds."
Rumpf also said Toshi was a strong proponent of the Clearwater staff and board having diverse representation and she played a critical role in Clearwater's Green Cities initiative, which tool the group's message of environmental conservation into urban areas.
Clearwater Grieves Loss of Toshi Seeger
July 11, 2013
Hudson River Sloop Clearwater
BEACON, NY - Toshi Seeger, Clearwater matriarch and wife and partner to Clearwater founder Pete Seeger for almost seventy years, passed away Wednesday morning at home. Toshi Seeger's efforts and influence were key to the founding of Hudson River Sloop Clearwater over 45 years ago, and also to its continued evolution as an environmental organization serving the Hudson River Valley today. 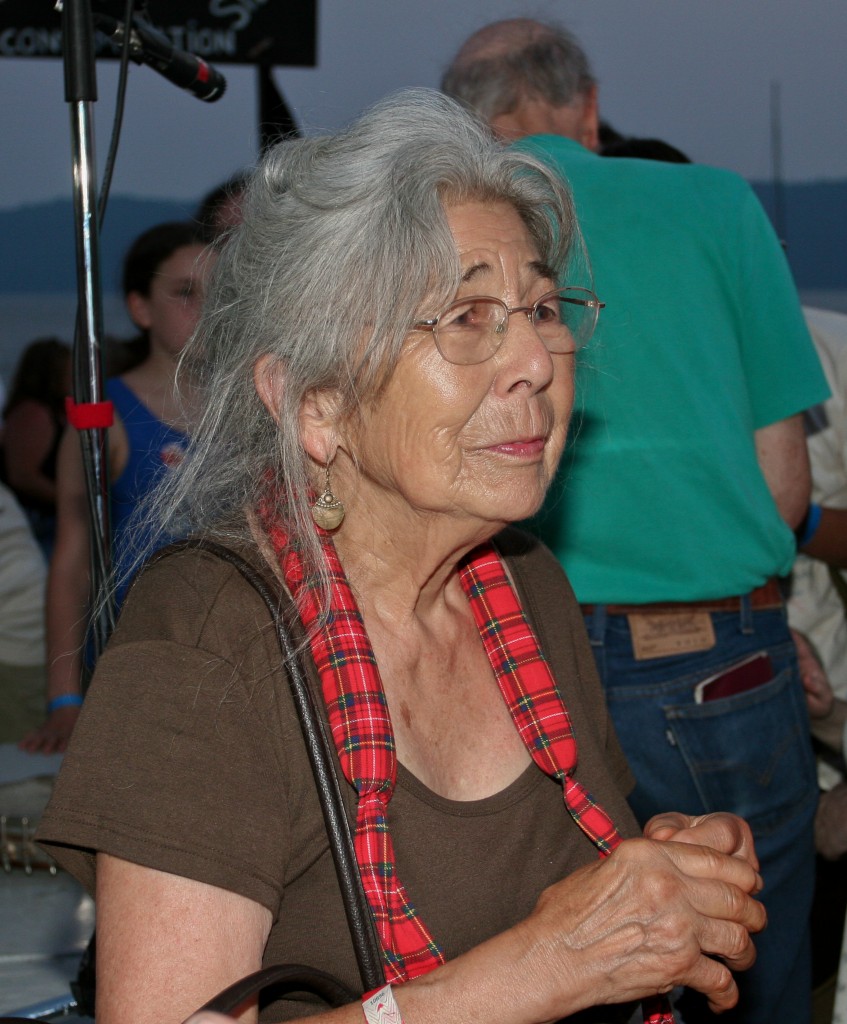 Toshi Seeger at Clearwater
credit - Clearwater / Econosmith
Toshi-Aline Ohta Seeger co-founded Hudson River Sloop Clearwater with husband, musician and activist, Pete Seeger in 1966. Toshi was involved with Clearwater in multiple ways from the organization's beginnings and helped to steer the various folk concerts and events, including Pumpkin Sail and the early incarnations of the Clearwater Festival. She was active in the development of what has been known as the Great Hudson River Revival for 35 years, a music and environmental festival that welcomes over 20,000 visitors to Croton Point Park in Westchester County, NY each year.
Toshi attended many of Clearwater's earliest board meetings and helped the organization develop its mission and methods.  With a fine analytical mind, she was cognizant and vocal about how Clearwater's work fit into the larger picture and sought to involve the local communities including as many different kinds of people and points of view.  Toshi was important to setting the tone of the festivals, from establishing a great deal of the booking to starting the "litter pickers" program that evolved into the Clearwater Festival's award-winning Zero Waste program.
Many Clearwater members recall that she "fed the world" and brought the Stone Soup tradition to every type of Clearwater event. When the sloop Clearwater was launched in South Bristol, she headed up the effort to feed over 2000 people.  "We of little faith could not believe we could do that, but Toshi showed us how, said Debbie Cohen.  She always helped us do more than we thought we could (and I still have her in my head)."
Clearwater founding member Hal Cohen shared that, "All of us were enriched by her, and our lives are better because of her."
Toshi was truly a selfless soul - the unsung force behind so many of our dreams for a just world," said Travis Jeffrey, longtime family friend. "She not only fed our bodies with her remarkable culinary concoctions, but she fed our spirits to keep us all going. She was as good, as honest, and as candidly straightforward a person as I have ever known. I will not attempt to count her accomplishments; I'm just proud to have counted her as a friend."
Toshi's contributions to Clearwater over the past four decades are countless and she will be missed by all. Clearwater extends its deepest condolences to Pete Seeger and to the Seeger Family.
Interview: Toshi-Aline Ota Seeger
by Sue Leonard
Persimmon Tree - An Online Magazine of the Arts by Women Over Sixty
Summer 2012 issue