Organizer: 'When you are hurting, you need to be around some people who still believe in the possibility of us being one people'. 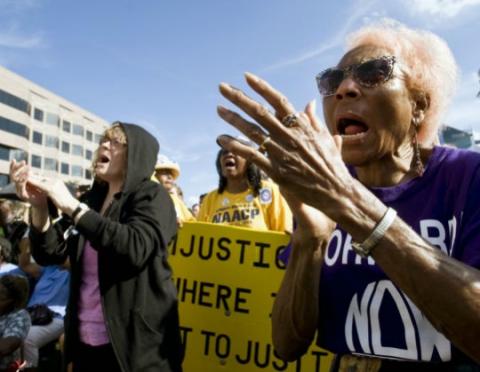 North Carolinians met this week for the 11th consecutive anti-GOP action known as "Moral Mondays."  Demonstrations were originally intended to focus on women's issues, highlighting a recent anti-choice measure working its way through the legislature, but expanded to express outrage over the not-guilty verdict in the trial of George Zimmerman.

Approximately 100 people were arrested, two-thirds of them women, for protesting in the House. This brings the total arrests to 800 since the Moral Monday protests began in April.

“When you are hurting, you need to be around some people who still believe in the possibility of us being one people," noted organizer Rev. William Barber as he addressed the crowd, likening the case of Trayvon Martin's murder to that of Emmett Till.

Barber, who was prompted by the verdict to leave an NAACP conference for the protest, added, "I also came back to tell all of us, ‘Let’s stand our ground,’” the News & Observer reports.

The calls for racial justice intertwined with demands for reproductive rights. The day of protest was themed "United for Women," prompted by a state bill attacking abortion rights.

The bill, which was brought to life by the Republican-controlled legislature by being tacked onto an unrelated motorcycle safety bill, will decimate abortion access and close almost all clinics within the state if passed. Governor Pat McCrory, who pledged during his campaign not to sign any anti-abortion bills into law, is now promising that if it reaches his desk he will sign it into law.

"I guess I felt like I haven't spoken up enough and it's time to make my statement," commented Grace Stitt on why she made the 8-hour journey to protest the bill.  "I felt like I needed to do something more than write an email to a senator or representative because I'm not sure those are ever read."

Citizens are concerned about the steady stream of arrests the Moral Monday protests face, according to the News & Observer, with the city police department spending approximately $69,000 on arrests and security so far.  “It would be nice if the state reimbursed us, but that’s not going to happen," said Raleigh Mayor Nancy McFarlane.

[Lucia Brown is a summer editorial intern at Common Dreams.]