Honduras: Where the Blood Flows and the Rivers are Dammed

Dams funded by foreign investors are threatening the cultural heritage and livelihood of Honduras indigenous peoples. 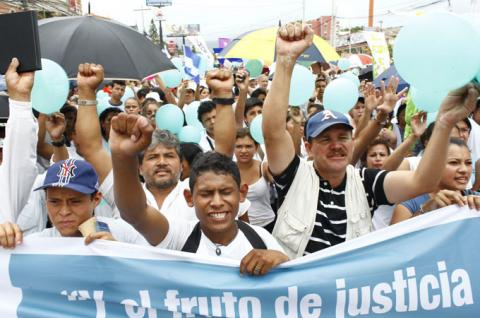 On July 3, Hondurans demonstrate demanding a halt to crime and violence. , EPA

It is all too easy for one’s eyes to glaze over at the headlines of yet another murder in Honduras, the country that earned the dubious moniker of the world’s murder capital. Forty-nine year-old Tomas Garcia was shot dead on July 15, just one of thousands of victims. Violence marches on unabated as observers become desensitised to the mounting human toll, comforted by the illusion that the carnage is associated with, and perhaps even justified by anti-social behaviour, a convenient misconception that provides a buffer between us and the grief for the fallen.

Yet Garcia’s murder is not the result of unrestrained gang or narcotrafficking violence, corruption or random crime, and its inclusion as a statistic obscures his murder’s political motivation and the tragedy it leaves in its wake. The unarmed Lenca indigenous community leader was shot at close range in front of a crowd of witnesses. Garcia’s 17-year-old son Allan was seriously injured. The act was not random but was instead part of a pattern of systematic and calculated repression by Honduran authorities.

Garcia was killed because he stood at the front of a peaceful protest against the Agua Zarca hydro-electric dam, which is largely financed by foreign investors and threatens the cultural heritage and livelihood of his community.  Well aware of the danger he faced but unable to turn away from his community’s struggle, Garcia’s courageous stand leaves his widow to care for their seven children.

His assassination was preceded by escalating intimidation - threats and harassment, and menacing security personnel. Garcia’s community is resisting the hydro-electric project that was enticed by Honduras’s "open for business" slogan engineered in the wake of the coup that deposed democratically-elected president Mel Zelaya.

Indigenous communities have been objecting to the illegal sale of their territory to transnational companies who seek to extract profits by harnessing and privatising communally-owned water.  Yet in September 2010, the Honduran National Congress awarded 41 hydroelectric dam concessions, during a time when the government of Porfirio "Pepe" Lobo’s legitimacy was still questioned by the majority of Latin American governments.

A month later, a coalition of indigenous groups, including members of the Tulupanes, Pech, Miskito, Maya-Chortis, Lenca and Garifuna peoples, convened a meeting to organise in resistance to the illegal concessions, many of which were granted on indigenous territory without proper consultation and consent of the groups.

These omissions violate International Labor Organization Convention 169, which requires that "Consultation with indigenous peoples should be undertaken through appropriate procedures, in good faith, and through the representative institutions of these peoples" and the United Nations Declaration on the Rights of Indigenous Peoples. Indigenous groups have also noted that various international mechanisms designed to address climate change have contributed to the exploitation and degradation of the land for which they have served as rightful and responsible stewards for generations. These include the UN’s Clean Development Mechanism and the Program of Reducing Emissions from Deforestation and Forest Degradation in Developing Countries (REDD). The rights of indigenous communities to prior informed consultation and consent are being bulldozed, just like their ancestral land.

The Agua Zarca Dam project in Garcia’s community is one of the disputed concessions, part of four interconnected dams along the Gualcarque River. The project is coordinated by a partnership between the Honduran company Desarrollos Energeticos S.A. (DESA), which owns the concession, and the Sinohydro Corporation of China, which seeks to develop the hydro-electric power. The web of investor friendly legislation and support from the Lobo administration empowers the companies to violate human rights with impunity.  According to Berta Caceres, General Coordinator of the indigenous coalition COPINH (Civic Council of Popular and Indigenous Organizations) that seeks to defend indigenous territories, the companies are supported and protected by the Honduran security forces.

Lenca residents of Rio Blanco claim that the dam threatens to degrade the surrounding environment, deplete the local water supply, diminish their livelihood and destroy the spiritual connection to the land that is foundational to the community’s history and survival.  The Lenca communities are engaging in peaceful resistance to the construction by blocking the access road, action that has drawn a swift and brutal response from the government, along with a campaign to vilify the protestors.

The conflict escalated on May 23, when police ended 50 days of peaceful community resistance by forcibly removing protestors. A day later, the repression took an ominous turn when Caceres was arrested on the spurious charge of illegally possessing a weapon, shortly after she criticised the police eviction action. Although the charge was provisionally dropped following an international outcry, the local prosecutor is appealing the dismissal, and the case is far from over.

Business friendly, taken to an extreme

The Lobo administration signaled its embrace of a neoliberal development model when it convened an economic conference in May 2011, entitled "Honduras is Open for Business". The government sought to reassure investors that risks would be minimised and profits maximised, promising unprecedented access to the country’s exploitable resources, many of which are located within indigenous territory that is subject to the protection of various international protection schemes. The intervening years have witnessed an ambitious and far-reaching legislative agenda that gives primacy to corporate rights.

Human rights observers fear that the recently passed "Law for the Promotion of Development and Reconversion of the Public Debt" will only intensify the exploitation of resources for the benefit of foreign investors and the country’s own economic elites and exacerbate the illegal dispossession of indigenous and campesino communities. The law authorises the Lobo administration to employ the nation’s natural territory and the "idle" resources it contains as collateral to investors who can then exploit concessions for future profits.

Critics of the law note that it was pushed through with little debate and even less transparency, as the details of implementation remain shrouded in secrecy. Observers contextualise the rush to pass the law in advance of November’s national presidential election as a bold effort to entrench protections for business interests, fearing that Xiomara Castro, wife of deposed president Mel Zelaya, and head of the newly formed Libre party will implement democratic reforms.  President Lobo has tacitly acknowledged as much in recent days, opining that a Libre party victory would be a disaster that would not be well received by the business community.

The Rio Blano conflict is emblematic of broader struggle

Similar struggles are percolating across Honduras as the dispossessed seek to protect their livelihoods and their lands from the agro - and business oligarchs who partner with the military and police in meting out repression for acts of resistance to their absolute power. In the Bajo Aguan, over a hundred campesinos have been killed resisting eviction by agro-oligarchs led by Dinant Corporation’s Miguel Facusse.

The Afro-Indigenous Garifuna people along the Caribbean coast are struggling to protect their land from ecotourism and "model cities" that will strip local control and displace ancestral communities.  Human rights defenders are criminalised throughout a country with a notoriously corrupt judicial system that consistently fails to vindicate their rights.

This repression reinforces centuries of historical exploitation and suffering, but occurs in the context of a surprisingly vibrant and resilient popular movement struggling for a more inclusive, participatory and egalitarian future for Honduras. As with the rest of Latin America, foreign influence is ubiquitous, and should be held to account.

International financial institutions, including multilateral development banks, provide development aid and impose structural adjustment policies that advance the neoliberal agenda. Governments provide aid to military and police who have supported the economic and political status quo and have been complicit in the repression. Counter-narcotics efforts are increasingly militarised, and private foreign investors demand obscenely favourable conditions and returns, irrespective of the human costs.

Hondurans deserve a brighter future, free from unfettered repression, intractable corruption, stark inequality and pervasive poverty. The international community must stand in solidarity with the Honduran popular movement and its courageous leaders and demand that the country’s future be determined by the free, democratic and fair election of a government that advances the interests and rights of all Hondurans, not just its economic and political elites.

[Lauren Carasik is a Clinical Professor of Law and the Director of the International Human Rights Clinic and the Legal Services Clinic at Western New England University School of Law.]