Why the Music of Protest Is Still Worth Defending - Dar Williams interview; new movie about Victor Jara; songs are illegal in Wisconsin

We can't change the world if we can't even sing together - Dar Williams on what happens if political music dies. "When people come together and sing, mountains can be moved." New film about Victor Jara, Chilean troubadour, murdered by the junta 40 years ago - brings Victor's story up to date. "If you are watching people singing in Wisconsin, you could be subject to arrest." (video)

The world of film and music has always been a part of the fabric of social change. It has the power to move us, challenge us and change us., http://whenyouwakeupamother.com/?p=1835
Dar Williams: Why the Music of Protest Is Still Worth Defending
by Madeline Ostrander
July 19, 2013
Yes! Magazine Photo from Razor and Tie Media.
It's become fashionable to say that political music is either dead or irrelevant. "Because of the '60s, part and parcel of being a `serious music fan' is lamenting that music isn't political enough," wrote communications scholar Michael Barthel in Salon last year, in an article called "Protest Songs Are Pointless." The pop sound that's churned out these days by top-grossing industry producers, even when it's edgy or raging, is rarely political. But some of us secretly long for the solidarity that comes from belting out an old anthem together, without embarrassment. We wish it were possible for such a small act to foment revolutions.

As the music industry grows more consolidated, it supports few of the fiercely independent voices that define political folk music.

When people come together and sing, mountains can be moved.

In 2003, she moved with her husband to Cold Spring in the Hudson Highlands north of New York City, 30 miles from her hometown of Chappaqua. She put down roots in an iconic place - in the shadow of Storm King Mountain, the site of a successful 17-year legal battle against a power company that helped launch the modern environmental movement and redefine conservation law. And she's a few miles down the road from Pete Seeger, who has become a friend and mentor. "Pete [has] a certain regal presence in the Hudson Valley. His spirit is there."
Here, while raising her two children, Williams wrote the songs on the album Promised Land and her most recent record, In the Time of Gods, a concept album about Greek mythology. The newer record touches on environmental issues, with metaphors drawn from the landscape around her. One song imagines Pete Seeger as a mythological river sentinel. It is, Williams says, an album about the work of building civilization, "this beautiful hammering-away." This is also an apt description of Williams' politics. She is now putting the ideas of "positive proximity" into regular practice in her own life. She speaks with a near-frenetic energy about transforming Cold Spring into a model of sustainability - a center of car-free tourism and hiking. She and her husband recently held a meeting at their house over a pasta dinner to talk about the town board. It was another act of making space for creativity: "Out of those dinner parties and hanging out with friends, that's how [change] is going to happen ... not just because our ideals led us there." "We need to sing side by side"
Williams is now an established veteran of folk, and her music part of the canon of political songwriting. It's hard to say who, among the millennial generation, is following most closely in her footsteps - folk is an ever more independent and local genre, and there are hundreds of songwriters who list Williams as an influence.
This past fall, Williams decided to step more actively into the role of mentor and music scholar. She taught a course at her alma mater, Wesleyan University in Middletown, Conn. She called it "Music Movements in a Capitalist Democracy" - although, in Williams' view, the latter does not support the former well. "I'm not saying we shouldn't have capitalism. I'm just saying when you put music through this machinery, with no human society, no soil, no actual democratic community around it, it's not a pretty thing. And performers, audiences, genres get mangled in it."
The students received lectures about capitalism in silence, and Williams wondered if she had made them uncomfortable. But a chief lesson was about restoring a sense of community to music and vice versa. In the end, her students' creativity astounded her: "The last assignment was for students to design their own festivals. One person wants to create more commerce for a beautiful town in New Jersey and [strengthen] its connection to the Delaware River. She called it the Delawareness Festival. Another kid wanted a celebration of Alabama's music to heighten [awareness of] the issues of coal being dumped into the drinking water in Birmingham. My mind was blown - the dreams they have for what music can do are all there."
But Williams admits that political music has lost some of its idealism. She invited Peter Yarrow, of the 1960s folk trio Peter, Paul, and Mary, to visit one of her lectures. "I didn't realize how cynical I was until I saw the contrast between my approach to getting people to sing along and [his]," she said. "He made the class sing with him every five minutes. He's a believer ... that when people come together and sing, mountains can be moved. [His] attitude is, if we don't find that ability to sing together then we lose something very important."
I asked her if that experience had changed her performance style. "Yes, I've been trying to do one sing-along song a night, and it's the high point of the evening. At the end of the night, I get so much feedback from people about it."
Sure enough, that night I found myself in a crowd of people at my local symphony hall singing "If I Had a Hammer." "We need to sing side by side, and I know you can, because it's Seattle," Williams announced to the audience. And at first, admittedly, I felt silly, and the song seemed old and sentimental. But it energized the crowd and drew the attention of the room away from the sole performer and the single guitar on stage to a swell of voices across the auditorium. It wasn't anything like a revolution - but a reminder that it's possible for several hundred people to un-self-consciously hit the same notes, and that's a start.
[Madeline Ostrander wrote this article for YES! Magazine, http://www.yesmagazine.org/ a national, nonprofit media organization that fuses powerful ideas with practical actions. Madeline is YES! Magazine's senior editor.]
The Resurrection of Victor Jara - Official Trailer
by John Summa, Writer/Producer
Listen to the trailer 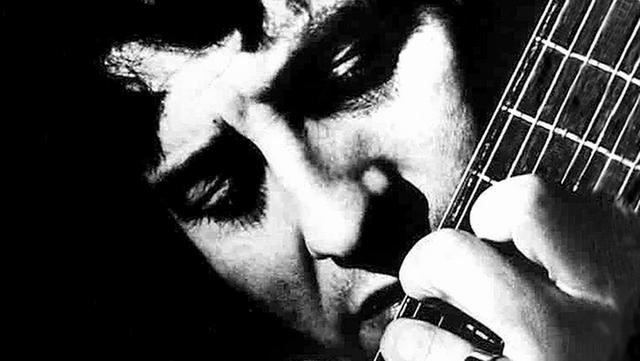 "Victor lives in the heart of his people"
--Michelle Bachelet, Former President of Chile

Victor Jara was at the forefront of a roots music revival during the tumultuous 1960s in Chile and across Latin America.
A theater director, musician, activist and teacher, Victor transformed folk music into a revolutionary social movement known as "New Song" (Nueva Cancion).
His songs and singing came to embody the hopes and dreams of an entire continent -- a legacy that still resonates today, not just in Latin America, but worldwide.
This feature documentary presents the heroic yet tragic story of Victor Jara: from his rise to prominence as a noted theater director, to his years as a folk-inspired troubadour, finally to his horrific execution at the hands of a fascist military regime -- a junta responsible for summarily executing or 'disappearing' thousands of Chilean citizens.
The film also brings Victor's story up to date, turning the camera lens on his powerful and unexpected cultural resurgence in recent years. This 'resurrection' is not accidental -- it's the result of many years of hard work and courageous steps taken by fans, family and determined supporters. Their efforts have paid off: once clandestine, Victor is today a powerful symbol of the struggle for human rights and social justice -- not just in South America, but worldwide.
Some of today's most prominent artists, along with Victor's friends and family, have joined together to tell his story. Among them: Pete Seeger, Arlo Guthrie, Emma Thompson, Peter Gabriel, Judy Collins, Jackson Browne, Victor's widow Joan Jara, and Bono, who wrote about Victor in the classic U2 song, One Tree Hill. Also included: interviews and performances by such legendary Chilean music groups as Quilapayun, Illapu, and Inti-illimani, plus many younger musicians, among them Luis LeBert of Chile and Leon Gieco of neighboring Argentina. The Resurrection of Victor Jara chronicles a tragedy of the past that still echoes ominously today -- an eerie reminder of our tenuous hold on freedom and the precious human rights we often take for granted.
More information about the forthcoming documentary - http://www.resurrectionofvictorjara.com/#!__englishhome
[John Summa is an award-winning journalist, educator, and author. He has reported from North America, Latin America, Asia and Europe for more than 30 years and is currently a lecturer in economics at the University of Vermont. In addition to producing "The Resurrection of Victor Jara," he is director/producer of the documentary film, "The Contra War: Not In Our Interests" (1987) about US-backed terrorist attacks on Nicaragua, and a documentary currently in production, "Occupied Yale: The Anti-Apartheid Revolt of 1986". Born in Bronxville, NY, John was raised in Connecticut and currently lives with his wife and two children in Burlington, Vermont]
Watching the Solidarity Sing Along is Declared Illegal
watch the video
Observers and tourists in the rotunda in Madison, Wisconsin, is now illegal and tourists and spectators are subject to arrest for merely watching the Solidarity Sing Along. This isn't the America I grew up in.
Bruce Fealk posting on YouTube - August 6, 2013
Watching People Sing Illegal in Walker's Wisconsin - Spectators Subject to Arrest
watch the video
On Friday July 26 a group of people gathered in the Capitol rotunda to exercise their First Amendment right to petition their government and consult for the common good and so on in song. The Capitol Police brought out an LRAD1000x and announced that the group of people were "unlawfully assembled" and warned that if the they did not disperse the entire group was subject to arrest, but the police took it further than that.
Groups of officers would march into the rotunda and seemingly randomly select 3-5 people and cuff them and bring them downstairs. They did this every 8-12 minutes.
But above the singers were dozens of people watching, bearing witness to the gross police and political misconduct, just checking what was going on, touring the capitol with their family, along with a contingent of Republican staffers getting off watching the real life police porn.
Police started warning random groups of onlookers that if they didn't immediately disperse they to would be arrested. Many of those warned were tourists visiting from out of town.
Arthurkr222 posting on YouTube - July 26, 2013