Good luck predicting how the new set of Israel-Palestine peace talks will unfold. 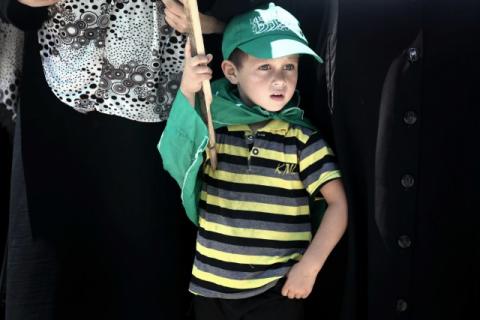 Two months ago, no one was forecasting that Egyptian democracy activists and generals would join forces to overthrow the country's president. Two months ago, sensible experts all knew that Kerry's Folly—the secretary of state's attempt to renew Israeli-Palestinian peace talks—would never succeed.

The Middle East is not kind to expectations. It has no Nate Silver who can scientifically calculate the odds of when war, revolution, or even peace will break out. Morsi is gone; the talks have begun. Viewing the two events through the same lens leads to—well, let's not call it a prediction, but a word of caution: The toughest issue for the Israeli, Palestinian, and American negotiators could be what to do about Hamas-ruled Gaza.

With Morsi's fall has come the reversal of Hamas's standing in Cairo. It's not just that the deposed president represented the Muslim Brotherhood and that Hamas, born as the Brotherhood's Palestinian branch, is tarred by association. The Egyptian military, the young activists, and other opponents of the Brotherhood "see Hamas as having involved itself in internal Egyptian politics," explains Ben-Gurion University professor Yoram Meital, a leading Israeli expert on Egypt.

Morsi has been held by the military since it removed him from office on July 3. Last week a court provided a legal basis for his detention: He's under investigation for conspiring with Hamas in the 2011 attack on the Wadi Natroun prison that freed Morsi and other Brotherhood leaders during the uprising against the Mubarak regime. Whether the Brotherhood actually invited its armed Gazan comrades to strike in Egypt is almost besides the point. What matters is the political meaning: Hamas is cast as the hostile foreign force with whom discredited politicians conspired.

What's more, Meital notes, Egyptian security officials are providing the domestic media with a steady stream of leaks connecting Hamas with attacks by Islamic militants in the Sinai Peninsula. By easing traffic through the Rafah border crossing between Sinai and Gaza, it's alleged, Morsi made it easier for Hamas-linked militants to enter Egyptian territory. Leading Brotherhood figure Mohamed El-Beltagy is under investigation for allegedly inciting Hamas militants to attack Egyptian forces in Sinai after Morsi was overthrown. Again, the facts about Hamas's role in the long-escalating battle between the government and Islamic groups in the Sinai are hard to know. What's clear is the role assigned the Palestinian Islamic group in the Egyptian political drama.

As a consequence, Hamas-ruled Gaza is more isolated, physically and politically, than ever. The Syrian civil war cost Hamas its alliance with Damascus. The latest Egyptian upheaval shattered its relations with Cairo. The Rafah crossing between Gaza and Egypt is barely operating. The Egyptian army has stepped up efforts to destroy the smuggling tunnels between Sinai and Gaza—a route for weapons but also for fuel, food and building supplies. Since the Hamas government taxes the tunnel trade, its revenues have plummeted.

On Tuesday, Hamas announced its own doubtful allegations of the guilty party in the crisis: It's all the fault of the Fatah-led Palestinian Authority (PA) government in Ramallah. At a press conference in Gaza, reported by Al-Jazeera, Hamas officials presented documents purportedly sent from Ramallah to the security attaché in the Palestinian Embassy in Cairo. They instructed him to pay a Gazan "source" for obtaining bombs manufactured by Hamas's military wing and smuggling them to Egypt—in order to implicate Hamas in recent violence in that country. Fatah, predictably, dismissed the documents as forgeries, and said they were meant to prevent any reconciliation between the Palestinian movements.

The allegations came just as the talks between Israel and PA representatives began. That's a coincidence; the timing was a matter of events in Egypt, not in Washington. The mutual accusations highlighted the intensity of the rivalry between the Palestinian groups, which goes beyond their attitudes toward Israel or the negotiations.

"What is happening between Hamas and Fatah," explains Meital, is roughly parallel to what is happening "between the Egyptian military establishment and the Muslim Brotherhood. It's a political power struggle, and what is at stake is power itself."

And that's precisely the challenge as the negotiations proceed. A peace accord that ignores Hamas won't mark the end of the Israeli-Palestinian conflict. The rebel province of Gaza would remain as the magnet for Palestinian rejectionists, the stronghold for all those who oppose the terms of a two-state agreement.

So besides all the issues that are publicly acknowledged as part of the negotiating agenda —borders, security, refugees, holy places, and more—there's one more that requires a solution: reuniting the Palestinians, or creating a framework that can include Hamas. It would be a mistake to predict that the problem is insurmountable, if only because pessimistic predictions can also be proven wrong. It would also be a mistake to wish the problem away.

Gershom Gorenberg is a senior correspondent for The Prospect. He is the author of The Unmaking of Israel, of The Accidental Empire: Israel and the Birth of the Settlements, 1967-1977 and of The End of Days: Fundamentalism and the Struggle for the Temple Mount. He blogs at South Jerusalem. Follow @GershomG.