What is the best way to use pronouns in reporting on a transgender person, according to GLAAD and AP? Which media outlets did a good job with pronouns reporting on Bradley/Chelsea Manning? Wikipedia handled the revision of their entry swiftly and with little controversy. But in other media, the picture was decidedly more mixed. 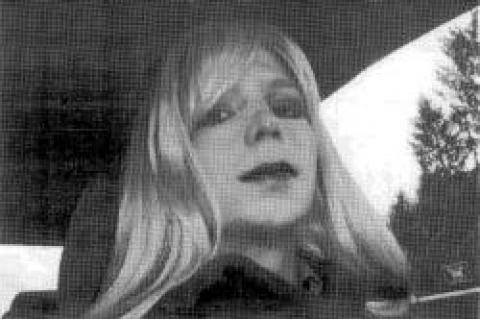 Avoid pronoun confusion when examining the stories and backgrounds of transgender people prior to their transition. It is usually best to report on transgender people's stories from the present day instead of narrating them from some point or multiple points in the past, thus avoiding confusion and potentially disrespectful use of incorrect pronouns.

Remarkably, whatever editorial dispute these changes of wrought has been self-contained and ineffectual.* Almost immediately after Manning’s announcement, a few editors changed the entry title and the pronouns. One editor did protest, claiming that "this is a complete inaccuracy. He is still a man, legally and biologically. It does not matter what his wishes are," and a few tried to undo altered pronouns. But the AP/GLAAD style suggestions have clearly carried the day.
Wikipedia’s rapid reaction is especially notable in light of the media’s continuing strain to respect Manning’s gender wishes. Slate’s Amanda Marcotte has admonished the press to "start using female pronouns immediately." Still, many outlets--including, ironically, the AP itself--have struggled. In their early reports, Reuters, the AP, and the New York Times all referred to Manning as a male, though the Times has retroactively removed several usages of "his." The Huffington Post has declared that it will respect Manning’s preferred female pronouns, even revising the Reuters story to incorporate the change. Politico’s editors, on the other hand, have stated that "we’re going to stay with ‘he’ until he begins his treatment, per AP style ... but it’s a difficult call and we’ll continue to reassess."
The press, in other words, has spent the morning debating the matter, while Wikipedia quickly and quietly settled the issue as soon as it arose, capitalizing on its crowdsourced efficiency. Editors may also have learned from past mistakes in the realm of gender identity: In 2008, a transgender journalist found that editors spent weeks shifting back and forth between male and female pronouns. This time, they indulged in no such equivocation.
*Update, Aug. 22, 2013: This sentence has been altered to reflect the fact that though there is some editorial dispute, it has not had any effect on Manning's entry itself.

I don’t know much about the gender-reassignment process, beyond what I vaguely recall from the home movies Uncle Gus used to show me in his basement after Aunt Maggie moved away.

But I do know what when a transgendered person announces his or her new identity, it’s considered polite, if not mandatory, to refer to him or her by the new pronoun. A man who wants to be a woman is "she," and a woman who wants to be a man is "he." Anything else is insensitive and bigoted.

Now that convicted spy Bradley Manning has announced that she wants to live as a woman named Chelsea, how are various media outlets treating her? Are they being respectful of her choice, or do they hate the LGBT community?

Let’s take a look! Emphasis mine throughout.

Bradley Manning, who has been sentenced to 35 years in prison for leaking government and military documents, announced Thursday intentions to live as a woman, requesting that she now be identified as Chelsea and with female pronouns.

Pfc. Bradley Manning said Thursday that he wants to live his life as a woman and be known as Chelsea Manning as he begins a 35-year prison term for leaking classified information to WikiLeaks.

Bradley Manning, the Army private sentenced to military prison for leaking classified documents, revealed he intends to live out the remainder of his life as a woman.

After Bradley Manning, now Chelsea Manning, was sentenced on Wednesday to thirty-five years in prison for the release of classified information, her lawyer David Coombs read a letter addressed to President Barack Obama requesting a presidential pardon.

The Army private who leaked classified state departments to Wikileaks, born Bradley Manning, has announced that she would like to be referred to as Chelsea Manning, using feminine pronouns, and wants to begin hormone therapy "as soon as possible."

One day after being sentenced to 35 years in prison for leaking vast archives of secret government files to WikiLeaks, Pfc. Bradley Manning said Thursday that he is female and wants to be known as Chelsea.

Bradley Manning told the Today Show via a letter that he plans to eventually get hormone therapy and live as a woman.

One day after being sentenced for leaking a large amount of classified documents to an anti-secrecy website, Army Pfc. Bradley Manning announced he intends to live the remainder of his life as "Chelsea Manning," a woman, and begin hormone therapy as soon as possible.

Bradley Manning wants to live as a woman named Chelsea and begin hormone treatment as soon as possible, the soldier said a day after being sentenced to 35 years in prison for giving government secrets to WikiLeaks...

Manning has spent more than two years at a minimum-to-medium-security facility for pretrial prisoners at Leavenworth, but after sentencing, he was to be moved to military’s only maximum-security prison, which is also at Leavenworth.

"I am Chelsea Manning. I am a female. Given the way that I feel, and have felt since childhood, I want to begin hormone therapy as soon as possible."

Manning, the former intelligence analyst who was responsible for the largest leak of classified information in U.S. history, was sentenced Wednesday to 35 years in prison. He could be paroled in as soon as seven years.

Bradley Manning, the Army private who was sentenced to 35 years in military prison for giving classified documents to WikiLeaks, has identified as female since childhood and wants to live life as a woman, according to a statement released by Manning’s lawyer.

The statement made public on Thursday said the 25-year-old former intelligence analyst wants to undergo hormone therapy to help spur a bodily transformation.

No gender pronouns used for Manning throughout entire story. TBD!

On Wednesday, Army Pvt. Bradley Manning was sentenced to 35 years at Fort Leavenworth for sending classified material regarding the U.S. war in Iraq to the Web site WikiLeaks. Thursday morning, he let the world know he will begin living as a woman named Chelsea. And I thought my week was stressful.

The US soldier who was sentenced as Bradley Manning on Wednesday plans to undergo hormone therapy and has asked to be recognised as a woman.

In a statement on Thursday Manning said she would like to be known as Chelsea E Manning and be referred to by female pronouns.

One day after being sentenced to 35 years in prison for the largest leak of classified documents in U.S. history, the Army private the world knows as Bradley Manning issued a statement about who she really is.

Bradley Manning announced in a statement today a name and gender change. Bradley is becoming Chelsea and is asking to be referred to as a female and wants to begin hormone therapy...
Manning’s gender confusion was brought up before and during her trial.

Bradley Manning, the US soldier who leaked secret US government documents to the Wikileaks website, has announced he wants to live as a woman.

In a letter thanking supporters for their "tireless efforts," Chelsea Manning, formerly known as Bradley Manning -- the source of hundreds of thousands of secret government documents made public on Wikileaks -- says she wants to begin hormone therapy "as soon as possible."

"I am Chelsea Manning."

With those words, read from a statement on NBC’s "Today" on Thursday, Bradley Manning immediately shifted public conversation away from the Army private’s conviction on espionage charges to gender identity.

"As I transition into this next phase of my life, I want everyone to know the real me," Manning said in the statement. "I am Chelsea Manning. I am a female. Given the way that I feel, and have felt since childhood, I want to begin hormone therapy as soon as possible. I hope that you will support me in this transition."

While his supporters may back Manning, the Army said Thursday it won’t.

As for the Daily Caller, we just have the Associated Press story, which mostly avoids gender pronouns but at one point slips up and refers to Manning as "he." Bigoted by proxy!

That’s just a partial list, but you get the point.

If we’ve learned anything from this exercise, which we haven’t, it’s that Politico, the Wall Street Journal, the Today Show, the New York Times, Business Insider, CBS DC, ABC News, NPR, at least one guy at Forbes, BBC News, CNN, and the Associated Press are a bunch of bigots.

Or maybe they’re not, and political correctness is silly and exhausting.

You make the call... bigot.