Does anyone still believe that the massive surveillance operations revealed by Edward Snowden were really geared toward protecting us from terrorists? 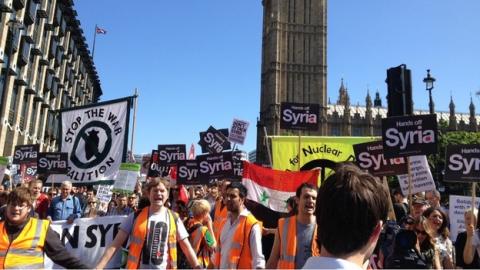 Demonstrators walk past the Houses of Parliament in London,ITV News/Adam Smith

President Obama’s proposed “humanitarian” bombing of Syria, which seemed like a done deal just a few days ago, is now running into serious trouble both at home and abroad.  This is a great thing for those who care about human life and increases the chances that Washington and its allies may eventually be forced to support a negotiated solution to Syria’s bloody civil war.

In a major blow to both Prime Minister David Cameron and President Obama, the U.K. parliament voted on Thursday to reject a military attack on Syria, and Cameron pledged to respect their decision.

Now we can see why the Obama administration has been in such a hurry to lob cruise missiles at Syria, that it didn’t want to wait even a couple of days for the U.N. inspectors to do their job.   No one had put forth any military or security reason for the rush to attack; no one claimed that speed was essential or even relevant to saving any lives.  Rather, it now seems, the urge to shoot first and ask questions later was driven by the need to carry out this illegal attack before the public, and their representatives in national and international bodies, could weigh in.

The U.S. public has been deeply suspicious because of what the New York Times politely calls the “botched intelligence” leading up to the Iraq war, which most Americans would more plainly refer to as “lies.”  Then yesterday the Associated Press reported that “the intelligence linking Syrian President Bashar al-Assad or his inner circle to an alleged chemical weapons attack that killed at least 100 people is no 'slam dunk,'" and that this “uncertainty calls into question the statements by Kerry and Vice President Joe Biden."

Time is not on the side of the “humanitarian” would-be bombers. Here in Washington, at least 162 members of the U.S. House of Representatives have publicly demanded a congressional debate and vote before the U.S. takes any military action against Syria. This is of course a legal requirement in the United States, under our Constitution and the 1973 War Powers Resolution. The Republicans lost their majority in Congress in 2006 because of the Iraq war, so there are political risks here that will be more noticed as the debate widens.

Even before the British parliamentary vote, the Obama team had less legitimacy and popular support for its proposed bombing than almost any U.S. military action has had in recent history. There was no U.N. Security Council resolution, which would be the requirement for legality under international law;  no support from the Arab League, nor even one Arab government, which Washington had for the bombing of Libya; not even NATO, which Washington can generally count on for almost any war. And now the UK has refused to join Obama’s “coalition of the willing,” leaving him with an unprecedented level of international isolation if he chooses to carry out his threat to bomb Syria.

Americans are against the intervention by a 60 percent majority; similar or larger majorities in Germany, France, the U.K., Turkey, Egypt, and what looks like most of the world are also against it.

Then there is the problem of even defining what the objectives are.  Obama has insisted that his goal is “not regime change,” and that is probably the most believable part of his story.  Unfortunately the implications of this pledge turn out to be even uglier than an attempted overthrow. Much uglier. War advocate Edward Luttwak described in the New York Times what is very likely official policy:  bleed both sides indefinitely, and then maybe pick up the pieces when there is not much left of either.  This makes “sense” from a ruthless, imperial point of view, since the strategic objective for years has been to weaken Assad, but now that Al-Qaida-type forces are the bulk of the military opposition, their victory is not very appealing.

The strategy is reminiscent of (then Senator) Harry Truman’s statement about WWII on June 23, 1941:

So there you have it: A government that has long lost the moral high ground through military interventions that have slaughtered vastly more civilians than Assad’s forces could ever kill, seeking support for an effort to prolong a hideous civil war.  No wonder Obama’s PR campaign is not working. And no wonder there are worries  about greater involvement from military officials like U.S. Army Chief of Staff Martin Dempsey – the military, for its part, likes to have a clearer objective than trying to prolong a war.

And Americans, take note: What does it tell you about our leaders’ real concern about protecting us from terrorism, when they have been willing to create a situation that has brought fanatical terrorists (some actually affiliated with Al-Qaida) to the brink of state power, just to possibly advance Washington’s influence in the Middle East?  Does anyone still believe that the massive surveillance operations revealed by Edward Snowden were really geared toward protecting us from terrorists?

The Russians, who are widely condemned for supplying arms to the Syrian government, look reasonable by comparison to the U.S.  Unlike Washington and its allies, who have insisted on Assad’s resignation as a starting point for talks, the Russians have at least pushed for a negotiated solution to the civil war.  This could possibly have saved tens of thousands of lives if Washington and its allies had only been interested in negotiating.  And despite the ugly mess that Western intervention has helped create, it is still the only solution to the conflict going forward.