Insect swarms from warmer regions near the equator branching out to new locations they would have previously found too cold threaten global food security. 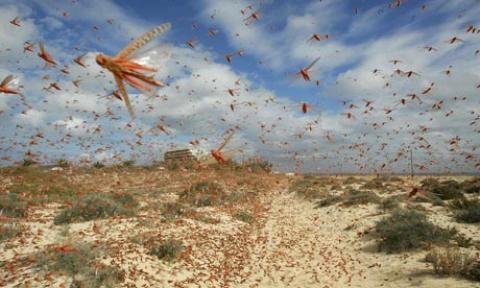 Pests are shifting two miles on an average towards the North pole every year. ,Carlos Guevara/Reuters

Hundreds of crop pests are advancing away from the tropics at a rate of nearly two miles a year, research has shown.

The mostly likely explanation for the trend is said to be climate change as rising temperatures make new habitats more inviting.

Pest invasions driven by global warming have serious implications for agriculture and food security, according to scientists.

Already, between 10% and 16% of global crop production is lost to pests such as fungi, bacteria, viruses, insects and worms.

Losses caused by fungi and fungi-like micro-organisms alone amount to enough to feed 8.5% of the global population.

Agricultural pests are mainly spread by being carried on transported farm products. But the second most important factor in disseminating pests is weather.

To investigate the likely effect of climate change, British scientists studied data on the distribution of 612 crop pests collected over the past 50 years. They found an average shift towards the north and south poles of around 1.7 miles (2.7km) per year.

Pests whose traditional homes were warmer regions near the equator were branching out to new locations they would have previously found too cold.

Dan Bebber, from University of Exeter, who led the research published in the journal Nature Climate Change, said: "If crop pests continue to march polewards as the Earth warms, the combined effects of a growing world population and the increased loss of crops to pests will pose a serious threat to global food security."

One example of a serious weather-sensitive pest was the mountain pine beetle, Denroctonus ponderosae. Warmer weather had driven the beetle northward to destroy large areas of pine forest in the US Pacific north-west.

Another was rice blast fungus, a devastating pest affecting more than 80 countries which was now attacking wheat. Considered a new disease, "wheat blast" is having a severe impact in Brazil and there are fears of it spreading further north to the US.

The scientists wrote: "Observed changes in pest distributions accord with observations of wild species, direct responses of pests to warming, and with expectations for expanding pest ranges under climate change."

Co-author Professor Sarah Gurr, also from University of Exeter, said: "Renewed efforts are required to monitor the spread of crop pests and to control their movement from region to region if we are to halt the relentless destruction of crops across the world in the face of climate change."