Work Is Undervalued in Society’s Obsession with ‘Stuff’

While the media is packed with material about consumer rights, there is seldom mention of workers’ rights. 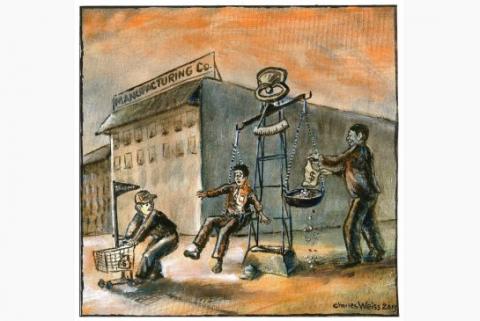 The reality for most people at work is a fundamental lack of respect. , Charles Weiss for the Toronto Star

Why is there so much attention paid to people as consumers, but so little to people as workers?The reality for most people at work is a fundamental lack of respect.

Is it because the mere mention of our rights as workers suggests uncomfortable truths that threaten the very ideological foundations of the current economic system?

As we look back on Labor Day, these are important questions to ponder.

The vast majority of us are wageworkers. Wages are our primary source of income. Or we collect a pension because we and/or our spouse were once workers. Or we are dependants of workers.

In fact, a huge proportion of the money spent by consumers in our economy comes directly or indirectly from our wages as workers.

Despite this obvious reality, while the media is packed with material about consumer rights, consumer choice, ads claiming the best price for consumers and politicians such as the industry minister claiming “to do what’s best for consumers,” there is seldom mention of workers’ rights except when it concerns strikes or other “disruptions” to the economy. It’s as if workers are mere cogs in a giant machine, only worth discussing when a breakdown occurs. There’s no profit to be made promoting workers’ rights; in fact, we are seen primarily as a cost.

Occasionally there is some lip service given to workers as a resource; words to the effect that “we’re all in this together” might be spoken, but if workers were truly valued as people, wouldn’t there be at least some semblance of democracy at work?

Instead, the master-servant relationship is the legal framework that dominates under our current economic system.

Reality for most at work is a fundamental lack of respect. That’s why “the system” prefers to focus on us as consumers rather than as workers.

So what, one might ask? What’s the big deal if workers must give up being treated as equal human beings, so long as we are well paid? The object of work is to make enough money so that we can consume what we want and enjoy the good life, nothing more.

Aside from the fact many of us are not well paid, the answer to the question “so what?” is that work is an essential element of human identity. When asked at a party, “what do you do?” not many of us answer: “I shop.” And if we did, what would that say about us?

What we do — work — is what defines us, what makes us human. We want a job that is a source of meaning, not simply consumption. The renaissance in artisanal production — butchers, bakers, candlestick makers etc. — is in part a sign of this need for authentic work.

When work does not provide satisfaction alienation is the result. This leads to stress, addictions and other forms of ill health.

Even some unions become complicit in this alienation, focusing exclusively on squeezing out more money, in essence agreeing that what really counts is consuming.

Neo-conservatives want us to care only about making more money, about consuming more, yet they argue we should earn less. Of course this is a ridiculous contradiction. Smarter capitalists are Keynesians. They want workers to demand more and to spend more. But we’ve reached the limit of Keynesianism in two senses: Capitalists have abandoned it, so appeals for its return are a pathetic dead end. And even if the capitalists were willing to give us more, more has become an environmental dead end.

We need to marry the growing desire for authentic work, to define ourselves by what we do, with a wider vision of changing our economic system. Workers demanding greater control of their jobs can lead to a better world for all.

[Gary Engler, vice-president of CEP Local 2000, is a delegate at this weekend’s Toronto founding convention of Unifor. He is also a co-author The New Commune-ist Manifesto — Workers of the World It Really is Time to Unite (www.newcommuneist.com) about the future of unions and the left.]