The Climate Movement Is Singing for Our Lives

Saturday's Draw the Line held over 200 demonstrations across the United States - it was a day of action marked by song - a phenomenon that is starting to become a major feature of the climate movement.

On Saturday, thousands of people held over 200 demonstrations across the United States demanding that the president deny a vital permit for the Keystone XL pipeline, which would bring tar sands oil from Canada to Texas for export. In New York City, nearly 400 people gathered in Battery Park, where Hurricane Sandy's waters had surged less than a year ago for a rally and march to South Street Seaport.

Earlier that morning, artists from the Radical Art Initiative had walked through the financial district with a bucket of blue biodegradable pigment, marking how high the water line will be in 2100 if we don't take action on climate change now. The People's Puppets from Occupy Wall Street with the help of Occupy the Pipeline and United for Action volunteers carried a life-sized demon pipeline. More than anything, however, the day was marked by song - a phenomenon that is starting to become a major feature of the climate movement.

The Rude Mechanical Orchestra propelled the march with its trumpets, tubas and clarinets, while the People's Puppets entertained the rally with a canastoria - a form of interactive storytelling performed with music and large images. Using whimsical rhymes and beautifully painted banners, they told the history of fracking in New York. Later on, just before the rally came to an end, artists made use of another rare form of traditional storytelling known as a cranky. A canvas scroll with hand-painted images of the climate movement's struggles against fracking, drilling and mining passed through the hands of the crowd, as they stood in a circle humming a tune they were just taught. Meanwhile, the cranky's creator, artist Rachel Schragis, sang the lyrics: "There's no need to feel dejected because all of our grievances are connected." The performance was so moving that it brought many people to tears. 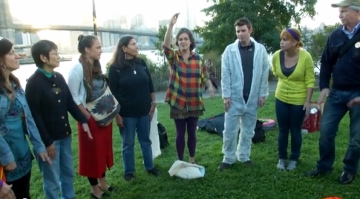 As Schragis explained to me later, the idea for this cranky came out of an artist gathering hosted last year by the climate group 350.org. One of the discussions that emerged was the problem of having many people working on different climate-related issues not seeing themselves as a movement. "I was really compelled by the idea that art can help with that," said Schragis. "So I made this piece about all the different fronts of climate struggle and the importance of unity and togetherness."

The importance of singing, when it comes to building movement cohesion and power, has a long history - from the labor rights movement and union songs like "Bring Out the Banners" to the civil rights movement and songs like "We Shall Overcome." As Martin Luther King, Jr. once said, ``The freedom songs are playing a strong and vital role in our struggle... They give the people new courage and a sense of unity... they keep alive a faith, a radiant hope, in the future, particularly in our most trying hours."

Unlike chanting, singing not only draws people in and helps them hear the message, but helps maintain unity in the group. As the environmental justice group Peaceful Uprising points out in their Communities of Resilient Resistance training curriculum, "Song brings about a vital engagement of the spirit that no one can deny or shut down, and creates an inviting and non-threatening atmosphere."

Based in Utah, Peaceful Uprising's organizers have put song at the heart of their work. http://corr.peacefuluprising.org/elements/song Not only do they sing at actions, but they actively work to educate people about songs for the movement, using a songbook that they created. Peaceful Uprising has also discovered that singing helps keep cohesion and power in the face of police repression. When co-founder Tim DeChristopher was found guilty of disrupting an oil and gas industry auction, his allies were there at the courthouse to support him with song. As he was being led away, Peaceful Uprising's curriculum notes that, "The songs not only reached Tim, but confused and eventually touched the Homeland Security officers and police that were stationed outside of the courthouse each day."

On another occasion, Peaceful Uprising took part in a massive sing-along. During an action at the U.S. Department of the Interior in 2011, over 600 demonstrators marched into the building, singing to demand a meeting with Secretary Ken Salazar. As Peaceful Uprising explains on its website, "The rotunda filled with voices singing, `We Shall Overcome' and `Singing For Our Lives' ... After threats of felonies, the 21 that were arrested were taken out in handcuffs to the waiting paddy wagons, joyously singing and being met with a crowd of 500 supporters singing with them and thanking them for standing up for their future." As a friend who was there later told me, it was one of the most powerful experiences he had ever witnessed.

In New York City, Occupy the Pipeline, with the help of the Occupy Guitarmy, has created some wonderfully catchy songs to sing on marches. In June they held a theatrical singing-based rally to fight the Spectra and Rockaway fracked natural gas pipelines in New York. They have also had the opportunity to learn from seasoned activist singers, such as Peter Yarrow of the 1960s folk group Peter, Paul and Mary, who came to New York to lead a workshop on singing for environmental activists.

The Massachusetts-based Students for a Just and Stable Future have also incorporated singing into their actions. In March, instead of having a typical protest against the Keystone XL pipeline filled with angry chanting, organizers - with the help of the band Melodeego - created a powerful and memorable action at the Boston offices of Transcanada, the pipeline's parent company, by singing a song called "Digging Us a Hole."  It's lyrics painted a powerfully morbid picture of the future facing today's young people: "They are digging us a hole six feet underground, where the pipeline will go. We will lay down our bodies. We will lay down our souls. No we won't stand by and watch as they dig us a hole."

A month earlier, the Massachusetts students along with the Better Future Project brought their songs and singing skills to the Forward on Climate rally in Washington, D.C. - which, with over 35,000 people in attendance, was the largest climate rally in history. At one point, they engaged part of the crowd in a call-and-response that told the story of the Keystone XL and the struggle against it: "Seventeen hundred miles of pipe. Seventeen hundred miles we'll fight."

As the climate movement continues to grow, singing will no doubt continue to play an important role. In fact, it may even play an integral role. Peaceful Uprising co-founder Tim DeChristopher said as much, when - shortly before his sentencing - he declared, "We will be a movement, when we sing like a movement."

[Linnea M. Palmer Paton is a climate justice activist living in Brooklyn, NY. She began her work organizing non-violent civil disobedience against fossil fuels with Students for a Just and Stable Future in Boston. She now works with Occupy Wall Street and Disrupt Dirty Power exposing the connections between Wall Street and the destruction of the planet.]