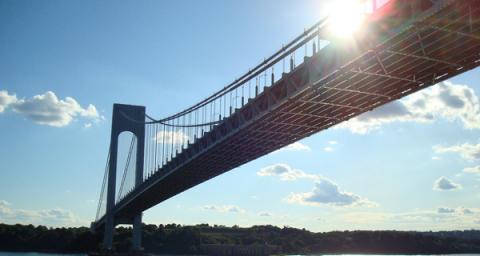 An explosion of anger this summer from labor leaders and elected officials about a contract to import Chinese steel for bridge repairs in New York City has fizzled out in the face of stubborn insistence by local transportation officials that U.S-produced steel is just too expensive.

New York’s Metropolitan Transportation Authority (MTA), which is in charge of the project to repair the landmark Verrazano-Narrows Bridge, came into contention with the United Steel Workers when it revealed it was spending an estimated $34 million to buy specialized steel products from the China Railway Shanhaiguan Bridge Group and the Anshan Iron & Steel Group. USW President Leo Gerard went so far as to describe the decision as “anti-American.”  Despite the USW’s repeated calls to use U.S.-manufactured metal in the renovation project instead of 15,000 tons of Chinese steel, MTA officials have flatly rejected any proposed changes to their plan.

USW District 4 Director John Shinn tells Working In These Times that a top-level meeting with regional transport officials earlier this month was “disappointing.” Though there appeared to be some agreement that government agencies would try harder in the future to source steel procurement contracts in the United States, the New York meeting also revealed that a separate regional transportation agency—the Port Authority of New York & New Jersey—will proceed with its own contract with Italian steelmaker Cimolai to supply a project to upgrade the Bayonne Bridge, just a few short miles away from the Verrazano-Narrows span. Like the MTA, the Port Authority will not reconsider its plans to import foreign steel, Shinn says.

For their part, transportation officials are pushing back hard against the criticism from USW and its political allies like Sen. Charles E. Schumer (D-N.Y.) and Sen. Sherrod Brown (D-Ohio). MTA spokesperson Adam Lisberg told Working In These Times this summer that the agency went to "extraordinary lengths"  to recruit a U.S. steel manufacturer for the bridge job, but that higher prices and uncertain delivery schedules made an American purchase impossible. Likewise, Port Authority spokesperson Chris Valens said in an interview with Working In These Times that pricing and delivery issues had driven the agency in favor of the Italian manufacturer. Cimolai is a proven high-quality vendor to the Port Authority, Valens added, having provided steel for use in construction of the new rail-subway center built to replace the one destroyed in the 9/11 World Trade Center attack.

Both agencies also defended themselves by arguing that the vast majority of their construction spending benefits U.S. producers and employs unionized labor. The Verrazano-Narrows project, for example, will cost a total of $235 million (including all supples, labor and administration) and generate about one million man-hours of employment locally, most of which will be performed by unionized workers, according to Lisberg. Furthermore, the MTA is itself one of the region’s largest union employers, with about 55,000 of its 65,000 employees under union contract. Similarly, Valens maintained that the Bayonne Bridge importation of foreign steel was an exception to the Port Authority’s normal practices, and he said a planned $1.5 billion replacement of northern New Jersey’s Goethals Bridge will use all U.S.-manufactured metals.

But these rationalizations miss the point, Shinn insists. The U.S. steel industry can compete with foreign manufacturers in many respects if given an adequate opportunity, he says, and some transportation agencies are too anxious to exploit loopholes in existing “Buy American” laws and regulations. One rule, for example, allows the agency a cost waiver when the price of U.S. products exceeds similar foreign products by six percent, which Shinn says is too low. Further, a longer lead time for bidding on the Verrazano-Narrows steel contract could have allowed a U.S. producer to assemble a competitive bid, Shinn contends. And if government agencies like the MTA and the Port Authority repeatedly ignore the currency manipulation practices and subsidies of foreign governments that allow overseas companies the advantage in material pricing, then U.S steel will be permanently shut out of participation in the market to rebuild and improve U.S. transportation infrastructure, he says.

One positive aspect of the September meeting between USW and the New York-area transport bosses, Shinn adds, was the inclusion of representatives of the Alliance for American Manufacturing. A non-profit venture of the union and union-contracted manufacturing companies, the AAM will become involved in coordinating government agency contract procedures to ensure full participation and fair treatment of unionized American companies in the future, says Shinn.

AAM officials, however, remain skeptical that transportation authorities will actually allow such measures to be taken. “I’m pleased that AAM’s team opened a constructive dialogue with the MTA. However, after a major outsourcing event like the Verrazano-Narrows Bridge, it is natural that U.S. manufacturers and workers remain skeptical that this won’t be repeated in the future,” AAM President Scott Paul stated in an e-mail comment to Working In These Times.

“As we move forward from this missed opportunity to create American jobs, AAM will be stepping up its monitoring of major bridge and public works projects nationally. We’re pleased that MTA is willing to cooperate and support this effort. With the cooperation of MTA and other transportation officials, we know that these projects can be made here in America by domestic fabricators using U.S.-made steel and manufactured goods with American workers at the ready,” Paul added.

Shinn say that he, too, is wary of the promises of government officials. “I don’t think MTA did the due diligence they should have,” on the Verrazano-Narrows project, he says, and “we’ll just have to wait and see if they are serious” about a broader commitment to sourcing contracts in the United States. He continues, “They gave us credible promises, but the proof is going be what they actually do in practice.”