On the heels of recently report showing that taxpayers lose when fast food workers, who receive low wages, are forced to seek public assistance (Univ. of California), fast food workers and their allies rallied in cities across the country. Front-leading New York mayoral candidate Bill de Blasio called for not only supporting efforts to raise the minimum wage, but to also help these workers organize. 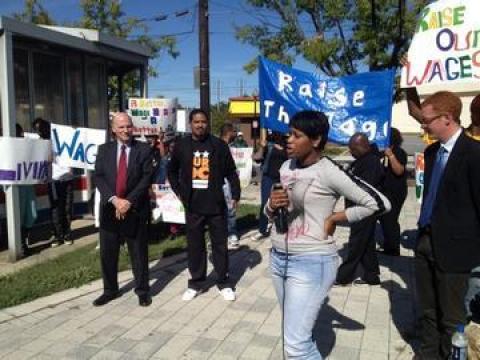 Members of the Our DC activist group staged two protests Oct. 15, one to highlight the findings of a report from the University of California, Berkeley, that found that taxpayers lose when fast food workers are forced to seek public assistance to take care of their families and another to demand that companies increase worker pay.

"The vast majority of the District's low-income households have heads of household who are working full time, but too many cannot afford to live in the city on their minimum wage salaries of $8.25 an hour and they are forced to supplement their lives with federal and local taxpayer subsidies," said Our DC spokesman James Adams. "A disproportionate number of these bread winners work in the fast food sector."

Adams said a worker with two children who works full time earns $17,160 a year, well below the federal poverty line. Skyrocketing housing costs and stagnate incomes for many people lead to them being "chained to food stamps, Medicaid and other federal subsidies because fast-food corporations care more about stockholders than the families who work to generate these enormous profit margins."

Mendelson, who signed the District's Large Retailer Act, passed by the council in July 8-5 in an effort to increase the minimum wage paid by large retailers to $12.50 per hour, said local "governments are subsidizing" large fast-food corporations because workers who don't make enough are forced into taxpayer-funded assistance programs. Mayor Vincent C. Gray later vetoed the wage-increase measure after Walmart threatened to abandon plans to build three stores in the District.

Mendelson urged the protesters to "keep following through" and to spread the word about their rallies to pressure companies to increase workers' pay.

"It's not right that...with where the minimum wage has sunk, that corporations are making billions of dollars a year while their minimum-wage workers are getting government benefits," he told the group. "What that means is that the governments are subsidizing the companies. Rather than McDonald's paying a decent wage so its employees can live a decent life, they pay minimum wage so that employees have to go to the D.C. government, or the Maryland state government and get handouts."

Later, the protesters moved over to a Wendy's restaurant in the 4200 block of Nannie Helen Burroughs Ave, NE. Carrying signs with slogans like "A Better Wage Means a Better Life" and "I Can't Survive on $8.25," and chanting "Hey, hey, hey! Raise their pay!" protesters rallied in the lobby of the restaurant as employees watched from across the counter. The protesters disbanded after a few minutes.

"It just doesn't make sense that we prepare and cook food for people every day, but instead of being paid enough to feed our own families, many of us can't afford three meals every day," said Kamesha Brown, a fast-food worker in D.C. who earns $8.25 an hour. "I can't support my son on $8.25 an hour. I want to stand on my own two feet. McDonald's should raise wages so we can afford decent food for ourselves."

A leader told the protesters that at noon on Oct. 15, two "fast-food poverty" reports were released. The Berkeley findings were explained in a report from the National Employment Law Project.

That number equals the annual budget of the Centers for Disease Control, the report showed.

Families of 52 percent of front-line fast food workers seek public assistance, according to the report.

"The states in which low-paying fast-food jobs cost taxpayers the most include California at $717 million; New York at $708 million; Texas at $556 million; Illinois at $368 million; and Florida at $348 million," the Berkeley report said.

The research showed that 67 percent of front-line fast-food workers are over 20 and 68 percent are the major earners in their families.

The NELP report said the "10 biggest fast-food corporations are responsible for nearly 60 percent, or $3.8 billion, of the almost $7 billion in public costs associated with their low-wage, no-benefit business model."

At the same time, the 10 largest fast-food corporations earned more than $7.4 billion in profits in 2012 and gave more than $53 million in compensation to their top executives and an additional $7.7 billion in dividends and buybacks to shareholders, the report found. 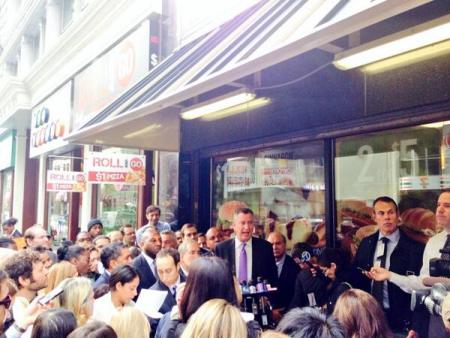 Bill de Blasio, the leading candidate in this year's mayor's race, held a press conference in front of a Burger King today.

His issue? The low wages of fast-food industry workers.

"It is right, it is right for leaders in government to step up on behalf of these workers and help them organize to win their rights," said Mr. de Blasio, who was the crowd-favorite when he and his then-Democratic opponents rallied for the same cause back in August.

In a short speech to advocates, including members of New York Communities for Change, Mr. de Blasio called for higher wages so that taxpayer dollars would no longer be needed to subsidize workers in the form of public assistance programs.

According to numbers cited by the campaign, the government spends about $700 million a year to compensate  workers living in poverty, which the candidate said leaves "a huge impact on the government budget that are obviously already strapped." Recent reports indicate the majority of those using this welfare are fast food workers.

"We now have an economy for many people based on the notion that work literally will not pay the bills," he argued. "These workers deserve the right to representation. They deserve the right to unionization so they can have decent wages and benefits-and the companies involved pay what is appropriate, [so] people can feed their families and the taxpayers are not left footing the bill."

"The bottom line is this is an unsupportable situation," he concluded as the crowd cheered.