War Resisters League Sings at the Cutting Edge of History

Belafonte looked out at the crowded room of pacifists, many of whom are no longer young and said, “Keep on singing.” 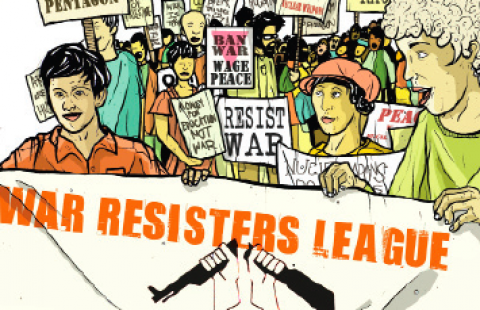 On October 18, War Resisters League celebrated its 90th birthday by honoring Joan Baez, Harry Belafonte and Daniel Ellsberg in a bash held at the 1199/SEIU Penthouse in New York City, which I had the great good fortune to attend.  Being in the same room as Joan Baez, the closest thing to an idol that I’ve got, is already safely tucked away as one of the joys of my life. (Other joys being standing out with the peace folks and my daughter.)

Harry Belafonte spoke about coming home after his service during WWII to a nation that still lynched African Americans and how he learned about non-violence from Bayard Rustin and Martin Luther King.  When, later in life he met with Bishop Desmond Tutu and Nelson Mandela, Belafonte’s experiences in the civil rights movement were of help during their struggle to rid South Africa of the apartheid regime.

Joan Baez told about the ten years of the Vietnam War that she did not pay war taxes, during which there was a lien on her house and car.  She sang two songs – Joe Hill and Gracias a la Vida – and shared an anecdote about having said on stage that her feet were tired from so many marches and being visited by two women after the concert, one of whom was 107 years old, and scolded her for saying her feet were tired!

Daniel Ellsberg spoke of how important it is to speak out when, as an individual, you know that there is wrongdoing by institutions.  Despite risks, dangers and consequences, it is crucial that human beings take action to tell the truth publicly, as Chelsea Manning, Edward Snowden and Julian Assange have been doing and as Ellsberg himself did when he released the Pentagon Papers.

It was a beautiful evening of sharing and honoring WRL history as well as these three individuals who have lived up to the highest ideals in their lives and art.

Harry Belafonte told us about how a time came when Martin Luther King was criticized for preaching to the choir, to which King replied that if he didn’t preach to the choir they might not keep singing.

Belafonte looked out at the crowded room of pacifists, many of whom are no longer young and said, “Keep on singing.”

Founded in 1923 by Jessie Wallace Hughan and some others as a secular pacifist organization, War Resisters League is the oldest secular peace association in the United States.  Not only is WRL an historical organization, it is an organization that has made history.

A few examples from the impressive history of WRL:

WRL staff person Bayard Rustin took a leave to play a crucial role in organizing the 1963 March on Washington for Jobs and Justice, perhaps best remembered for Martin Luther King’s extemporaneous “I Have a Dream” speech.  Both Joan Baez and Harry Belafonte were on that stage that day in August 1963.

The first peace group to call for U.S. withdrawal from Vietnam was WRL.  Throughout the long years of that war, WRL organized what became mass draft card burnings (with staff David McReynolds being one of the first to burn his draft card in 1965), coordinated major rallies, initiated civil disobedience actions and brought tens of thousands into the streets in opposition to the war.

WRL does pioneering work in nonviolence training preparation for nonviolent direct action.  From protests at induction centers during the Vietnam War, to the historic anti-nuclear power protest at the Seabrook Nuke, to the Women’s Pentagon Action protests, to training members of ACT UP in the days when AIDS was being ignored, WRL trainers and materials have been indispensable.

The War Resisters League pie chart shows where our income tax dollars go each year (48% on past and current military, over a trillion dollars in FY 2012).

In short, War Resisters League has been involved in every movement for peace and social justice for generations. It is a venerable organization.  Although the people involved in this exalted work may not be “household names,” they are not only the backbone, but a rock of movements for nonviolent social change.

WRL puts out a quarterly publication, WIN magazine, that covers resistance to war abroad as well as resistance to violence and militarism within the United States.

WRL is part of War Resisters International, which has a Handbook for Nonviolent Campaigns that is highly useful for all activists interested in a well-documented crash course in social change organizing.

The War Resisters League affirms that all war is a crime against humanity.  We therefore are determined not to support any kind of war, international or civil, and to strive nonviolently for the removal of the causes of war, including racism, sexism and all forms of human exploitation.

Long may WRL live and work!

Thea Paneth signed the WRL pledge long ago, was a “rank and file” clam in 1977 and works for peace and justice in Arlington, Massachusetts as a member of the United for Justice with Peace coalition.