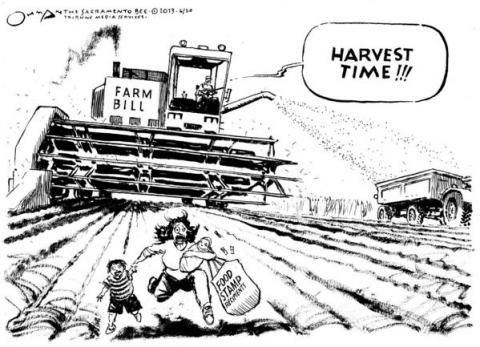 Starting Friday, the Supplemental Nutrition Assistance Program will see a $5 billion reduction in funding. This means families of four who rely on food stamps will receive $36 less each month, starting now—a serious blow to struggling families, but also the economy, since every federal dollar spent on food stamps generates $1.74 in economic activity.

This is just a prelude to deeper food stamp cuts likely to come, as Congress debates a five-year farm bill. So it is important to get the political dynamics of Friday’s cut correct. There is a troubling trend among some left-leaning writers to blame the big bad GOP. See for example Jonathan Capehart in The Washington Post: “Oh SNAP, veterans get dissed by the GOP.” But that’s not the entire story.

SNAP benefits were boosted by the 2009 stimulus bill, and were to remain at that higher level until the annual inflation adjustments overtook it. But in 2010, Congress (controlled of course, at the time, by Democrats) passed a bill that took $2.2 billion from SNAP and applied the funds to one of Michelle Obama’s pet projects: a healthy lunch initiative for low-income children. This is what created Friday’s abrupt drop in benefits.

At the time, many House Democrats refused to punish food stamp recipients and would not agree to the funding offset, especially since SNAP had already been raided once before to help fund a round of emergency aid to states. This lead to clashes with the White House and phone calls from Michelle Obama, as a contemporary Politico story notes:

Despite heavy lobbying by the first lady, more than 100 House Democrats have balked at approving the Senate’s $4.5 billion version of the nutrition bill because it is funded in part with $2.2 billion in cuts to SNAP, the federal food stamp program. They want assurances from the Obama administration that the funding cuts the Senate approved will be restored in the near future.

“The White House’s preference is to just pass the bill,” said a congressional staff member who spoke on the condition of anonymity while the negotiations are ongoing.

The White House kept promising to “find a different offset in the future,” in the words of a spokesman at the time, and Democrats eventually relented. But no offset was ever found—despite several crisis negotiations that have happened since: the spring 2011 near-shutdown, the summer 2011 debt-ceiling deal, the fiscal cliff of late 2012 and this fall’s dual government shutdown and debt-ceiling faceoff. Democrats extracted numerous policy concessions throughout all this, but solving the so-called “hunger cliff” was not one.

There were surely plenty of other funding offsets that could have been explored, or of course Democrats (who, again, controlled the House and sixty votes in the Senate) could have just passed the relatively small school lunch bill without any funding offset.

Why insist on the SNAP offset? Again, 2010-era Politico:

[Rahm] Emanuel and members of the president’s legislative affairs team have been trying to broker a deal to satisfy progressives. Offsetting the cost of the lunch program with cuts to food stamps was not an ideal approach for the White House, either; but there are also concerns about the deficit. And the White House has already made several funding promises to lawmakers, including assurances to Sen. Blanche Lincoln (D-Ark.) that she would receive agriculture assistance in exchange for her support for small-business legislation.

So it was “deficit” concerns and a desire to preserve “agricultural assistance” (read: farm subsidies) that motivated the White House to press House Democrats to raid SNAP.

It is no coincidence that both deficit reduction (incidentally, not offsetting a $4.5 billion bill would have a sub-trivial impact on the long-term deficit) and farm subsidies are both very high priorities to people with very large amounts of money. This gets back to a truism about Washington that is only getting more stark: the poor have virtually no pull.

Marty Gilens, a professor of politics at Princeton, has demonstrated this concept convincingly. When rich people and poor people disagree on policy, the rich people win:

Friday’s punitive and economically damaging food stamp cuts are much less a result of red-team-versus-blue-team politics, and much more a result of a political process where money talks.

That’s not to say that Republicans aren’t much worse on this front: indeed, the House GOP passed a terrible farm bill that cuts $40 billion from SNAP over ten years. House Democrats have been bravely rallying to restore the SNAP cuts this week, but getting nowhere with Republican leadership in the House.

But as the history of Friday’s “hunger cliff” shows, a basic indifference to the plight of people on food stamps is sadly a bipartisan problem. The Democratic alternative to the House farm bill is a Senate farm bill that cuts “only” $4 billion from the program, while continuing any number of bloated agricultural subsidy programs.

To actually end the insanity of simply debating the scale of harsh safety net cuts during an economic recession, instead of whether they are appropriate in the first place, it’s important to understand why this is happening. It’s not a simple case of mean old John Boehner.