The US Doesn’t Tax Financial Transactions. Here’s Why That Might Change Soon.

“As someone studying the economics of this, I can say that a financial transactions tax is a policy no-brainer,” Lynn Stout, a professor of corporate law at Cornell Law School, said at a Wednesday briefing on Capitol Hill. “It’s all upside, there’s virtually no downside, and it’s astonishing we don’t have one.” 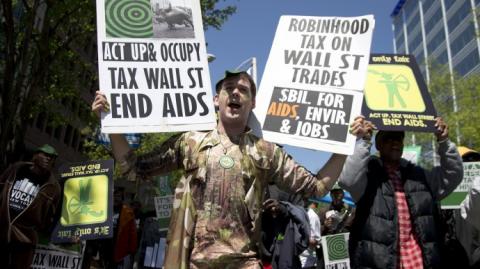 R.J. Barnett of New York marches with a crowd up Connecticut Ave. N.W., Saturday, April 20, 2013, in Washington, to demand support for the Robin Hood Tax, a financial transactions tax on Wall Street that they feel would solve the country’s growing revenue, AP Photo/Carolyn Kaster

WASHINGTON – A series of rallies, briefings and stepped-up lobby efforts rolled through Washington this week in support of legislation that would institute minor new taxes on the trading of stocks, bonds and derivatives, action on which the United States is lagging far behind much of the rest of the world.

Advocates of a U.S. financial transactions tax (FTT) say it would raise desperately needed revenues. Given the gargantuan size of the U.S. financial markets, some estimate such a levy would offer hundreds of billions of dollars per year, which could be used on domestic social programs or global common goods — or to lower individual tax rates.

They also argue that an FTT would lead to a far more stable economy, by cutting down on the impetus for investors to engage in speculation and the high-frequency, computer-run trading that has come to characterize today’s financial sector.

“As someone studying the economics of this, I can say that a financial transactions tax is a policy no-brainer,” Lynn Stout, a professor of corporate law at Cornell Law School, said at a Wednesday briefing on Capitol Hill. “It’s all upside, there’s virtually no downside, and it’s astonishing we don’t have one.”

Stout notes that essentially all products and services in the United States are taxed when they go through a public transaction, from daily necessities to luxury items.

“What is not taxed? Speculating in stocks, bonds and derivatives. That’s crazy! That means we’re essentially subsidizing speculation in financial instruments,” she says.

The idea of a financial transactions tax has been around in some form for centuries, and indeed, the United States had such a levy until the 1960s. Proponents are quick to point out that, contrary to current concerns from the financial sector, the economy seemed to function just fine under those conditions.

Yet the idea has come strongly back in vogue in recent years in the U.S. as well as around the world. This comes as a result of multiple factors, but most can be traced back to the 2008-09 global financial crisis, whose underlying cause boiled down to years’ worth of excessively leveraged bets made within the U.S. financial sector.

The resulting crash did at least three things: it severely ate into U.S. (and global) government coffers, it heightened public frustration with Wall Street to levels not seen in decades, and it underlined the need for greater regulatory action to stabilize financial markets. Similar trends can be seen in developed and developing economies around the world.

In the United States, momentum toward an FTT appears to have been growing after some activists adopted the idea in the context of the Occupy Wall Street movement. It was in this context that the FTT found a new U.S. nickname, with some referring to it as a “Robin Hood” tax. (It’s also called a Tobin tax after a U.S. economist credited with popularizing the idea of bringing it back.)

“Several years ago, our members began seeing the horrendous fallout of the latest crisis caused by the banks – floods of patients who couldn’t pay their medical bills, forced to choose between paying for food or medications,” Charles Idelson, communications director for National Nurses United, the country’s largest organization of nurses and a supporter of an FTT proposal, told Mint Press News.

“Our members understood that the solution to the U.S.’s economic problems is not more cuts, which seems to be the fashion in Washington. Rather, we need to find more revenue, and the best place to get it is from those people who aren’t paying their fair share right now.”

While 40 countries have by now adopted some form of FTT, the United States, home to the world’s strongest and most influential financial sector, continues to lag behind. Indeed, 11 European Union countries have already agreed to phase in an FTT, slated to go into effect in the middle of next year.

“Hopefully this is a tax that will soon become a reality in Europe, but is a tax that will achieve its full potential only if implemented on a larger scale, a global scale,” Anni Podimata, a political leader from Greece and current vice-president of the European Parliament, stated on Capitol Hill this week. “In this context, the U.S. is an extremely important jurisdiction.”

Podimata notes that, as in the United States, the financial industry in Europe is fighting hard to delay, water down or even kill the EU FTT.

“But what we’re saying is that the FTT will become reality because it’s a fair tax, because it’s a means to shift part of the burden from citizens to a sector that is admittedly under-taxed,” she says. “It is politically unacceptable to have been increasing taxes on labor and pensioners and give in to lobbyists claiming the industry will not be able to withstand this tiny tax.”

The U.S. Chamber of Commerce, the country’s largest business lobby group, has opposed an FTT for years. In a 2010 report, Chamber-commissioned researchers warned that such a levy would hurt jobs growth and make it more difficult for businesses to recover from the economic recession. They also released results from a poll suggesting that 70 percent of U.S. registered voters did not want an FTT instituted.

The U.S. government, too, has a history of antipathy on the issue. The U.S. Treasury has formally warned the European Parliament that its EU proposal would harm U.S. investors. Last year, the Congressional Research Service, the U.S. Congress’s main research arm, found that while an FTT could be a significant source of revenues, it was unclear whether such a tax would help tame volatility in the economy.

Still, numerous bills to create FTTs of various scope and shape have been introduced in Congress in recent years.

For many activists, perhaps the foremost of these is one introduced in the House by Rep. Keith Ellison (D-Minn.), a co-chair of the Congressional Progressive Caucus. Called the Inclusive Prosperity Act, this proposal would impose a tax of 0.5 percent tax on stock trades, 0.1 percent on bonds and 0.005 percent on derivatives and currency.

“The Inclusive Prosperity Act will ask those people who got so much benefit from the American people to do just a little bit – a little tax on stocks, derivatives, bonds – just a miniscule amount, but it adds up to $350 billion a year,” Rep. Ellison said Wednesday.

“If we get $350 billion a year, we don’t argue about paying for the things this country needs … We make sense; we do what proper countries do – put the welfare of their people upfront, as opposed to profits for rich bankers.”

Needless to say, $350 billion dollars a year is a massive amount of money. In comparison, the current across-the-board cuts to the federal budget known as the sequester — over which there continues to be much hand-wringing on both sides of the political aisle — would cut just $309 billion in the growth of domestic discretionary spending, and that’s over the course of a decade.

Advocates who have been pushing for an FTT for years say that there is today far more momentum toward creating such a tax in the United States.

“When we used to discuss this issue with lawmakers even just a few years ago, we would literally be laughed at – anyone who knew anything about tax policy would say this would never happen,” Jennifer Flynn, managing director of Health Global Access Project, which works to fight HIV/AIDS across the world, told Mint Press News.

“But then people started talking about revenue, and right now everyone says that they love the idea of an FTT. But what’s shocking is that when you try to hold their feet to the fire by asking them to sign on to a bill, many remain reluctant because they’re worried about campaign contributions.”

Still, the current activities in the European Union will provide a major test of the efficacy of a broad FTT, and could prove to be a major impetus for the United States.

“An FTT is inevitable in the U.S.,” Flynn says. “By June, after all 11 EU countries have implemented this plan and every major financial institution in the world is paying it, I imagine people will suddenly wake up and ask why, for instance, Germany is getting money on stocks that a U.S. company originated.”

Still, even if some sort of FTT were to be passed in the United States, the next fight – and almost certainly a larger one – would be over what to do with these new revenues. Rep. Ellison, for instance, wants to use that new money to focus on domestic needs – infrastructure, health care, education and retirement accounts.

Others have a more global outlook, focusing on the potential to have a major impact on global warming and disease. Health GAP’s Flynn says, for instance, that current estimates suggest the global AIDS epidemic could be brought under control within decades by using just a fraction of this potential pot of money – $6 billion a year.

Conservatives, meanwhile, would undoubtedly push for any FTT revenues to be given back in large part to taxpayers.

“Even though I’m optimistic that an FTT is finally on the horizon in the U.S., I fear it will be very watered down – a couple billion dollars on the table, which wouldn’t actually be able to be used to achieve these transcendent aims,” Flynn says. “That sort of use will only be possible if real social movement is pushing for it.”