The Afterlives of the Algerian Revolution (Jadaliyya Roundtable) 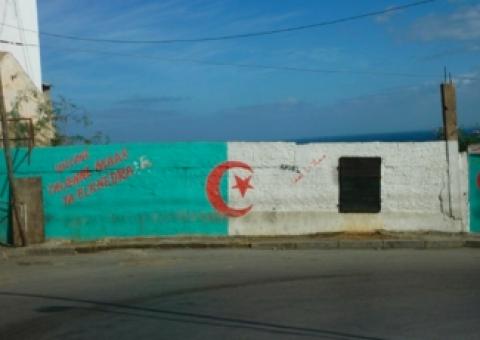 The Algerian flag painted on a wall near Notre-Dame d'Afrique in Algiers., Photo taken by Thomas Serres. / Jadaliyya

When Étienne Balibar wrote that "Algeria and France, taken together, do not make two, but something like one and a half," he was probably offering a political provocation as well as a historiographical injunction.[1]  Yet the statement poses the question of how to think about Algeria's independence as an Algerianist rather than as a historian of France. It poses the question as to why the amnesia that has long marked the French academy vis-à-vis Algeria has been reproduced in the current historiography, which rarely attempts to delve into the nitty-gritty of state building - not to mention the amnesia of the American academy which still wonders what to do with the Maghreb. It raises the question of why, at a time when so much time has been consecrated to understanding and theorizing anti-colonial nationalism, the subsequent construction of that nation-state still receives so little attention. Indeed, there is a historical irony behind Balibar's statement. At the moment that colonialism was no longer a reality, post-colonialism as a theoretical movement came to "commemorate a lost object" to borrow a phrase from Gayatri Spivak.

All of the papers here approach the Algerian Revolution as something that was itself productive - of repertoires of contestation, of ideas about a "social contract," of something that could later be "confiscated" - rather than as a historical bookmark. They also indirectly speak to a historiographical concern: by seeing 1962 as either the beginning or end, is the periodization of professional historians not in an unsettling convergence with the official narrative of the FLN? These papers also unpack the FLN as a constructed artifact that has seen many avatars since 1962 - from Ben Bella's first breathy experiences with a "specifically Muslim" form of socialism, to the hide tide of state centralization and Third-Worldism under Boumediene, to a time of economic liberalization that opened the way to the violence of the 1990s, and finally to the period of a multi-party system that uses international credibility as a substitute for genuinely democratic practices. As the works of Mohamed Harbi show, the FLN was never a singular or coherent movement, but the secular appropriation of a sacred discourse of legitimacy.

Given the widespread discontent with the ruling elite in Algeria, we might wonder how and when that legitimacy came under question. Malika Rahal's paper, which looks at the role of the Communists after 1962, asks: at what moment did the "magic" of the FLN start to wear off? Ed McAllister poses the question differently, asking what the nostalgia for the belle époque of Boumediene tells us about attitudes towards the current Algerian nation-state. If the rupture with the colonial system was the inauguration of Algeria's presence on the historical world stage, Thomas Serres interrogates the fact that accusations of neo-colonialism (or internal colonialism) are frequently lobbed against the present regime. Lastly, Natalya Vince and Samuel Everett's look at voices that often remain marginal in telling the history of Algeria since 1962: Algerian women and Algerian Jews. James McDougall has been kind enough to offer some framing thoughts.

These papers were initially presented as a MESA panel in New Orleans this past October. This panel - one of many on the Maghreb - had a decidedly different flavor. The central pole of research was oriented towards Algiers, not Aix-en-Provence (where the colonial archives are held). The methodologies employed often rely on fieldwork and interviews, forcing researchers to think about their own positionality as well as on the limits and possibilities of oral history. Indeed, if it sometimes seems that French historiography is forever indebted to the Annales school, these papers offer the texture of historical memory and lived experience in the place of charting mentalités. The title of the panel was originally, "Perspectives from Year One of the Revolution," a self-conscious reference to Fanon's "L'an V de la revolution algérien" (translated as "A Dying Colonialism" in English). In the Preface to this work Fanon writes, "Because we want a democratic and a renovated Algeria, because we believe one cannot rise and liberate oneself in one area and sink in another, we condemn, with pain in our hearts, those brothers who have flung themselves into revolutionary action with the almost physiological brutality that centuries of oppression give rise to and feed."[2] The faces of this oppression have certainly changed, but the sentiment remains as relevant in 2013 as it was in 1959.

Impossible Opposition: The Magic of the One-Party Regime by Malika Rahal

Reimagining the Belle Epoque: Remembering Nation-Building in an Algiers Neighborhood by Ed McAllister

"Give Us Back Our Oil:" Claims for Justice in Light of Algeria's Colonial Past by Thomas Serres

Testing Diversity, Researching the Invisible: The Jew, the Israelite, and the Margins of Algerian National Identity (in France) by Samuel Everett

[Muriam Haleh Davis is a graduate student in the Department of History at New York University. Her research interests focus on race and decolonization in Algeria.] 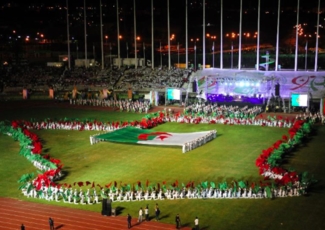 Image of celebrations during Algeria's fiftieth anniversary of independence.
Image from Xinhuanet.

[This is one of six pieces in Jadaliyya's electronic roundtable on the anniversary of the Algerian Revolution. Moderated by Muriam Haleh Davis, it features contributions from Ed McAllister, James McDougall, Malika Rahal, Natalya Vince, Samuel Everett, and Thomas Serres.]

Among the events that marked the fiftieth anniversary of Algerian independence in 2012 were a large number of historical conferences and colloquia. Many were high-profile, public events, attended by large audiences, and covered in detail in the national press. But it was remarked more than once during those events that very few of them had much to say about the fifty years of history that were supposedly being celebrated. Indeed, most historical discussion centered on the two areas of Algerian history that have undoubtedly been most heavily researched overall, both within Algeria and by historians of all other nationalities: the colonial period and the War of Independence. Algeria's contemporary history, since 1962, has only recently really come into view as an object of study for historians, accessible through archives, published print, and oral history. And within Algeria it is only recently, too, that the half-century since independence has been "open" to scrutiny and discussion as a period of history, that is, as the past that has made the present.

Socially and culturally, contemporary Algeria has never in any sense stood still. But politically, the impasse into which the system has steadily ground itself ever since the early 1990s, and which today is summed up in the tragically near-comedic deferral of l'après-Bouteflika, has produced an ambient sense of immobilism. The slogan of the 2012 celebrations, bill-boarded around Algiers courtesy of one of the major national mobile phone networks - ma zalna waqifin, "we're still standing" (more idiomatically, Algerians might have put it, mazalna debout) - expressed a post-1990s, post-crisis, post-war resilience that certainly says much about Algeria today. At the same time, the standstill of national life, awaiting the generational shift in the polity that happened thirty years ago in society at large, is in marked contrast to the sense of dynamism, progress, and transformation that consumed the country in the first twenty years after independence. Arguably, Algeria's long crisis from the mid-1980s through to the early 2000s put a brake not only on the realization of development, prosperity and freedom, but on a vision of how Algerian society and the Algerian state might both build on and move beyond their colonial-and-revolutionary past. That Algerian history should be "stuck" in 1962 - that the future imagined then should remain the unrealized aspiration of the present, fifty years on - is perhaps not so surprising. But taking account of the intervening time as having become history, and showing how this history (not the distant colonial past, nor the travails of the revolution, nor any number of perhaps real or mostly imagined conspiracies and betrayals) has produced the present, remains a challenge.

The articles in this Jadaliyya roundtable represent some of the best new research being done by contemporary historians tackling these questions. New work on Algeria has gathered remarkable pace in the past decade, and while much of this work has renewed our understanding of the colonial period and of the revolution, historians are now also turning to the contemporary period. This work faces new problems and provides new insights. Two themes in particular might be considered as shared features of the studies presented here.

First, the register of recent history is often presented, by interlocutors and interviewees, in a language of political value that serves as a powerful commentary both on the shortcomings of the present and on the imagined integrity of society and its political projects a generation ago. What historian and political analyst Hugh Roberts has called Algerians' expectation a "moral polity," visible in the demands of the young protestors of October 1988, is clearly in evidence here among former mujahidat, activists of the PAGS, and residents of Bab el-Oued. The reduction of the state-society relationship to the most minimal, materially redistributive dimension of this expectation, in the buying-off of opposition centrally and the routine political economy of riot by which so much of peri-urban Algeria has, over the past decade, come to relate to the authorities, is one indicator of how such accounts of the past articulate views of the present.

Second, the methodological possibilities and challenges of oral history, with which these studies engage intensively and conscientiously, open up new questions of interpretation. How do actors, now seeing Algeria's half-century of independence not as the end of their narratives of (nationalist, revolutionary) commitment, but as a chapter, or chapters, of history through which their own life-histories have also moved, give sense and structure to their accounts of this period? What are the recurring themes, tropes, and topoi of their stories? What do particular memories, or images, convey, why have they been preserved (or reinterpreted), and what (else) have they subsumed, translated, or erased? These are not questions of the "reliability" of oral history (which is different to, but not less than, documentary history), but of what kind of truths these narratives convey: how do Algerians themselves see, and tell, the "story-arc" of their past fifty years? And what can their understandings, collected, juxtaposed, brought into dialogue, reveal about this past that was once Algeria's future - les lendemains qui chantent - certainly, not so radiant as once imagined, but nonetheless, as the song goes, still standing?

[James McDougall teaches modern and contemporary history at Oxford, where he is a Fellow of Trinity College. He previously taught at Princeton and at SOAS, London. His research interests are in modern Islamic, Mediterranean, and Middle Eastern history, and he has a particular interest in the history of the French colonial empire in Africa. His first book was History and the Culture of Nationalism in Algeria (Cambridge University Press, 2006).]