The Struggle to Save Worker Education at Brooklyn College

Brooklyn College's plan to dramatically scale back the Graduate Center for Worker Education is one of the latest efforts to curtail examination of working class issues done in a way designed to provide students with activist skills. 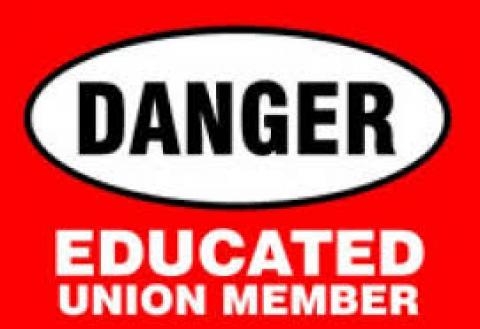 As has happened at so many colleges and universities around the country, administrators at Brooklyn College of the City University of New York are moving to eviscerate a program that for years has provided invaluable educational opportunities for working class students. The college's plan to dramatically scale back the Graduate Center for Worker Education is one of the latest efforts to curtail examination of working class issues done in a way designed to provide students with activist skills.

This development will no doubt be familiar to anyone involved in or aware of similar programs around the country that have recently been killed or are struggling mightily to survive. Among the principles behind the trend to eliminate such programs, two stand out: first, that college and graduate school should be the exclusive province of the well-to-do; and second, that education should serve the interests of the business class. Rarely do proponents openly enunciate those principles, however, and such is the case at Brooklyn College.

So, for example, management advocates of the suggested changes justify the proposed move of the Graduate Center from Manhattan to Brooklyn in the name of consolidation, glossing over the fact that there are far more union halls and working class jobs in Manhattan. In addition, administrative criticisms that the program does not meet the standards of a labor studies program conveniently ignore the fact that the program is not, never was, and does not aspire to be a labor studies program. As for the rationale for cutting evening classes to a grand total of one, and that scheduled for 6 PM in a program long geared toward students who traditionally have things to do during the day like, say, work - well, apparently no one was able to come up with a good cover for that one.

Many of the program's students belong to unions some of whom have gone on to leadership positions in their locals. Some are rank and file union members, while others are employed by workers centers and similar organizations. Others who may not fall into any of those categories are nonetheless activists and writers who advocate for working class concerns via articles, in-depth studies, research papers while also participating in organizations and coalitions resisting austerity. The need for the program's continuation in its present form - or, better still, its expansion - is obvious, as the devastating impact of the radical upward redistribution of wealth of recent decades is especially pronounced in New York City. Institutions with rich working class traditions such as CUNY and Brooklyn College should be in the forefront in the fight against such trends, not in the business of accommodating corporate elites.

The Graduate Center also offers its students, not to mention residents of the city as a whole, an ongoing series of events that deepen their understanding of crucial issues. Earlier this year, for example, it hosted the annual conference of the Labor and Working Class History Association which was the largest in LAWCHA's history. The program also hosts a regular schedule of forums featuring accomplished scholars, writers and activists that, from this author's experiences, are always well-attended and lively. Of particular note is the regular inclusion of guest speakers who are rarely invited to mainstream venues, including union halls. As adjunct teachers in the Graduate Center have been fired, the performance of the faculty union, the Professional Staff Congress, has been seriously lacking - some in the program have described it as collusive - despite the PSC's progressive reputation. Rather than taking up teacher firings as a collective issue that is part of a concerted campaign, PSC staffers have instead approached cases on a one by one basis, with predictably poor results. With a few exceptions, the union's staff has also looked askance at the growing resistance to management's plan to eviscerate the program.

That resistance has been spearheaded by the Committee of Concerned Students, Alumni, Faculty and Staff. Formed earlier this year, the Committee has reached out to academics, union members, students throughout the CUNY system and other New Yorkers with a petition that has garnered nearly 2,000 signatures. It has also held several public actions the most recent was a spirited rally at the main Brooklyn College campus on October 3rd. The Committee's petition can be viewed at http://petitions.moveon.org/sign/save-brooklyn-college and the group can be reached at committeeofconcerned@gmail.com. Go to www.workereddefense.org for updates and other information.

[Andy Piascik is a long-time activist who writes for Counterpunch, Z Magazine and many other publications and websites. He can be reached at andypiascik@yahoo.com ]