"What my country is going through as a result of this extreme climate event is madness, the climate crisis is madness. We can stop this madness right here in Warsaw," he said. 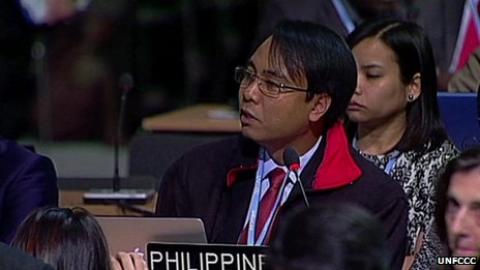 Philippines lead negotiator Yeb Sano made an impassioned appeal to the conference, BBC

The head of the Philippines delegation at UN climate talks in Poland has said he will stop eating until participants make "meaningful" progress.

In an emotional speech, Yeb Sano linked the "staggering" devastation caused by Typhoon Haiyan to a changing climate.

Mr Sano said he was speaking on behalf of those who lost their lives in the storm and his fast would last until "we stop this madness".

His speech brought tears to the eyes of other delegates and a standing ovation.

Mr Sano said the typhoon had made land near his home area, and he had just had word that members of his family had survived.

At the opening of the two-week Conference of the Parties (Cop), Mr Sano said he was not just speaking for those who lost their lives but for the thousands who were now orphans.

He told the meeting he would refuse to eat until progress is made.

"In solidarity with my countrymen who are struggling to find food back home, I will now commence a voluntary fasting for the climate, this means I will voluntarily refrain from eating food during this Cop, until a meaningful outcome is in sight."

"What my country is going through as a result of this extreme climate event is madness, the climate crisis is madness. We can stop this madness right here in Warsaw," he said.

Mr Sano's intervention unleashed a wave of emotion in the normally staid surroundings of the UN conference.

China proposed three minutes of silence in memory of the victims. Delegates stood, some with tears in their eyes as they reflected on the scale of human loss in the super storm.

Earlier the UN's climate chief, Christiana Figueres, had opened the meeting saying the typhoon was part of the "sobering reality" and negotiators should go the "extra mile" in their efforts.

Speaking at the conference centre at the national football stadium in Warsaw, Ms Figueres reminded the delegates that climate change was not a game.

"There are no winners and losers, we all either win or lose in the future we make for ourselves."

Participants from small island states said the typhoon served as a stark reminder of "the cost of inaction".

In a statement, Olai Ngedikes the lead negotiator for the Alliance of Small Island States (Aosis) said that the storm should motivate the work in Warsaw.

She said that discussions on the issue of loss and damage, a key element for developing countries, must proceed at pace.

"It has become clear that there are now impacts from climate change that can no longer be avoided.

"It is therefore essential that we establish an international mechanism on loss and damage here in Warsaw and address this crisis once and for all," she said.

Despite their sympathy for the situation in the Philippines, developed nations are likely to resist a formal, legal basis for future loss and damage claims associated with climate change.