The sad reality is that the only households with any 401(k) savings to speak of are white non-Hispanic, college-educated, married couples. Even within this narrow demographic, all but the wealthiest who use retirement accounts as tax shelters, would be better off under a more egalitarian and efficient system. 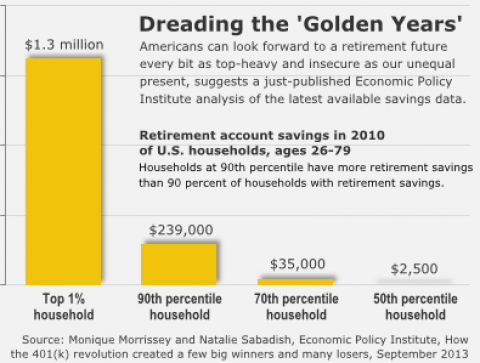 The American Benefits Council, the American Council of Life Insurers, and the Investment Company Institute released a study this week entitled (no joke): Our Strong Retirement System: An American Success Story. College professors may want to bookmark this study for textbook examples of cherry-picked data, outdated findings, and hypothetical scenarios contradicted by real-world outcomes. To cite one example: the authors tout the fact that 401(k) participants with at least 30 years’ tenure with the same employer (an unrepresentative group to say the least) have significant savings in their accounts. The authors devote a later section of the report to the unsubstantiated claim that “the 401(k) is a good fit for America’s mobile workforce.

Mostly, though, the report simply ignores the biggest economic challenge of our time: inequality. As Natalie Sabadish and I note in our Retirement Inequality Chartbook, it doesn’t matter if the “average” household has $86,000 saved in retirement accounts if the median (50th percentile) household has only $2,500 while the 99th percentile household has $1.3 million. Simply put, Mitt Romney’s gargantuan IRA doesn’t make up for the fact that most families have virtually nothing saved for retirement, any more than Romney’s lavish Bain Capital compensation made up for the fact that most workers haven’t seen a real raise in years.

The report correctly points out that the aggregate value of assets earmarked for retirement has risen faster than inflation in recent decades. As we acknowledge in the chartbook, retirement assets as a share of disposable income rose with the advent of 401(k) plans, peaking with the dotcom bubble in 2000. Even after the bubble burst, the aging of the large Baby Boom generation helped buoy retirement assets in the turbulent decade that followed, since workers tend to build up savings and pension benefits as they approach retirement.

Though retirement assets took a hit in the 2008-2009 downturn, many Boomers had the good fortune to participate in traditional defined-benefit pensions at some point in their careers, unlike younger workers whose retirement prospects the report studiously ignores. Thus, when the report notes that “the share of retirees who receive retirement income from private-sector plans rose by almost half from 1975 to 2012, from 21% to 32% [and] the median benefit rose by about one-third,” the reader should keep in mind that this marks a high point and largely reflects the growth in defined-benefit pension benefits for older Boomers and their predecessors. In any case, private-sector savings and pension benefits needed to increase simply to offset Social Security cuts enacted in 1983.

The sad reality is that the only households with any 401(k) savings to speak of are white non-Hispanic, college-educated, married couples. Even within this narrow demographic, all but the wealthiest who use retirement accounts as tax shelters, would be better off under a more egalitarian and efficient system.