The Democrats’ ‘Third Way’ Quarrel is a Fight for the Future

When voters come to understand the Third Way agenda and what it stands for, the resulting political shift could lead to corporate centrism’s “final moment” as the dominant faction of the Democratic Party. 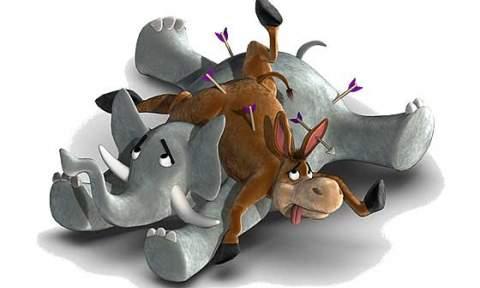 There was a big dust-up in the Democratic Party last week, triggered by a somewhat incoherent op-ed in the Wall Street Journal from the leaders of a Wall Street-funded “think tank”/lobbying group called Third Way. Many of the responses dealt with the op-ed’s attack on Sen. Elizabeth Warren, but don’t be distracted by that. As Sen. Warren would undoubtedly agree, the issues involved are much more important than the personalities.

As politicians affiliated with Third Way hasten to distance themselves from the op-ed, the question remains: Why are Democrats affiliated with a group which works so strenuously to gut Democratic programs? Voters deserve more than platitudes from these politicians. They deserve clear answers about the issues.

This is not an “inside baseball” story about politics. It’s not over-hyping to say that it’s a battle for party control whose outcome could affect every household in the country. If this quarrel is to be remembered – and it’s incumbent upon genuine progressives to make sure that it is – it should be remembered as an attempt by the corporate class to retain control of the Democratic Party and limit the leftmost limits of political and economic debate.

In our two-party system, this struggle could determine whether voters are offered a genuinely democratic and equitable economic agenda anytime in the near future.

Clearly Jonathan Cowan and Jim Kessler blundered in writing this editorial. It’s badly written and its arguments are poorly constructed – unlike other, much slicker Third Way materials. Worse, it’s misleading. (We discussed the content here. Michael Hiltzik of the Los Angeles Times did an excellent analysis.)

At times the op-ed descends into vituperation and becomes, as Rep. Keith Ellison (D-Minn.) noted, “out of line” and “really ugly.” We said there seemed to be “an almost palpable air of desperation” to it as well. That suspicion seems to be borne out in later remarks by co-author Jim Kessler, who said they wrote it because of Sen. Warren’s support for a bill to expand Social Security. Said Kessler:

“She is a very compelling elected official and national figure. Her involvement in that particular bill, we just looked at it and said ‘okay, this seems to be starting to get out of hand.’”

“Out of hand” is a telling phrase for a corporate-backed faction which has tried to keep the leftmost limits of debate very much in hand and under tight control. It has done so with striking success for decades, thanks in large part to its ability to influence politicians like Presidents Bill Clinton and Barack Obama.

One of this faction’s key goals is to roll back three of the Democratic Party’s signature achievements: Social Security, Medicare, and Medicaid. It is a measure of their power and influence that they’ve been able to get so many Democratic politicians to support Social Security cuts when public opinion is so strongly against them. (This poll even shows that large majorities would pay more in payroll taxes in return for stronger Social Security benefits.)

In the words of a Latin phrase beloved by district attorneys everywhere, “Cui bono?” Who benefits?

There are only two populations in the United States who clearly stand to benefit from these cuts – high earners, who would avoid paying more taxes if the payroll tax cap is raised, and the Wall Street banks which would become even more profitable if they were able to manage more retirement funds.

Third Way is very much a creature of Wall Street (as is documented here.) Its banking connections help explain these positions. They also explain why the self-described “think tank” is constantly raising the alarm about Medicare costs without mentioning the recent slowdown in health care cost increases – or, more tellingly, the negative effect private investors like those backing Third Way are having on our health care economy.

(For more on the effect of private investment on health care costs, see this Alternet story.)

“That Social Security plan was the final moment for us,” said Kessler of Sen. Warren. “Final moment” is a telling turn of phrase. Polls show that the public wants more genuinely progressive policies than those it is receiving from the Democratic Party leadership. Sen. Warren’s popularity seems like a harbinger of that party’s potential move to the left – a move that would render the “have it both ways” cynicism of the Third Way crowd obsolete.

Economically they’re already obsolete. The Clinton/Third Way/Democratic Leadership Council ideology – which typically markets itself as “centrism,” even though its economic policies are far to the right of public opinion – was thoroughly discredited by the financial crisis of 2008. That crisis was caused in large part by Wall Street deregulation which they pushed, and it exacerbated the growing wage inequality and loss of social mobility which has devastated middle class and lower-income Americans.

And yet, their brand of Wall Street-friendly “centrism” made a remarkable comeback after 2008, thanks in large part to the Obama White House’s influence on the Democratic Party – and to corporate money’s influence on the political process. Five years after the crisis, the entire nation is still seeing the disastrous effects of their economic policies on our nation’s most intractable issues: unemployment, wage stagnation and the lack of opportunity for most Americans.

Even corporate Democrats are beginning to recognize that our society’s increasingly unjust economy is becoming a political liability. It has become fashionable for them to talk about “inequality” (while remaining cautious and/or evasive when it comes to solutions). In one sense, at least, that’s a step in the right direction. At least it’s being discussed in the corridors of power – although it will only become meaningful when it’s backed up by concrete policies.

Until then, it’s clearly de rigueur to at least pay lip service to principles that Cowan and Kessler sneeringly dismissed in their op-ed as “economic populism.” (One can only imagine the phone calls they received after it was published.)

The Third Way Two come across like choir members singing from last year’s hymnal. Today’s corporate Democrats are expected to at least sing populism’s praises. Corporate Dems now seek to co-opt, rather than alienate, the many Americans who support Sen. Warren and the agenda she represents.

This shift in political emphasis is one of the reasons why many corporate Democrats hastily distanced themselves from Third Way’s op-ed.

The Progressive Change Campaign Committee (PCCC) quickly called upon Rep. Allyson Schwartz, a Pennsylvania candidate for governor and “co-chair” of Third Way, to resign from the group. Schwartz declined to do that, but she called the op-ed “outrageous” and hastily announced her support for the Social Security increases that had sparked Cowan and Kessler’s ire against Warren in the first place.

Rep. Joe Crowley responded to progressive pressure by saying he disagreed with Third Way on Social Security but would “continue to work with them.” Rep. Ron Kind objected to the singling out of Warren by name and said he disagreed with the idea that “economic populism is dead.” Rep. Jared Polis said, “I like Elizabeth Warren. I like Third Way. I hope they can learn to get along better.”

They are engaging in a kind of misdirection when they make this controversy about Elizabeth Warren and “getting along better.” This is a question of policy, not personalities. Schwartz and the other Democrats associated with Third Way need to be asked precisely where they stand on that group’s policy prescriptions – not because everything funded by the wealthy is bad, but because corporate money and influence is corrupting the political process.

By lending their names to the Third Way letterhead, these politicians are endorsing its agenda – not in part, but in full – presumably because this affiliation gives them access to money and power. If that’s not the reason, then the public deserves an explanation, especially considering the following: Third Way is largely funded by members of an industry with a well-documented record of fraud; that industry has enjoyed enormous government favors and its members have not been legally called to account for their misdeeds; and Third Way promotes policies which are beneficial to its patrons and hurtful to the middle class.

(And it does so while claiming to be “progressive” – a term which is quickly losing its meaning.)

Democrats who choose to be publicly affiliated with a group like that should therefore expect to be asked: How can we count on you to vote in the public’s interest when it clashes with Wall Street’s?

Third Way has taken a number of strong and specific policy stands. It’s not enough to denounce an op-ed. Democrats who affiliate themselves with Third Way need to answer some questions for the voters, such as:

There are those in our nation’s capital who argue that it is a “witch hunt” to ask these questions. Only in Washington is it considered a form of persecution to ask an elected official where they stand on the issues.

We’re living through tough economic times – well, most of us are, anyway. In the bubble-fueled Clinton economy of the 1990s, it was easier to obscure the economic divisions that have been tearing this country apart for decades. Unfortunately for the Third Way crowd, nowadays the fault lines are much clearer.

President Obama quickly abandoned his Third Way-ish habit of claiming that “Wall Street and Main Street rise and fall together” as it became increasingly clear that in most cases the opposite is true. The “old myths” – to use a presidential phrase – were shattered in the 2008 crisis.

Wall Street deregulation shattered the economy. The banks are now bigger and more concentrated than they were before the crisis. You can’t stand with them, support corporate-friendly tax and trade policies, push for “entitlement” cuts with cynical and misleading arguments – and still claim to be a “progressive” who opposes wealth inequality.

The preferred solutions of the Democratic corporate class – continued deregulation and under-regulation of finance and industry, job-killing trade agreements, and the Social Security, Medicare and Medicaid cuts they’ve been pushing relentlessly for 20 years – are disliked by American majorities. They are economically disastrous for most Americans. And yet, Big Money’s stranglehold on the political process has left the voters bereft of alternatives.

Washington operators like Jonathan Cowan and Jim Kessler aren’t really afraid of Sen. Warren. They’re afraid of what she represents, both politically and economically.

They’re right to worry. This isn’t a fight about Cowan and Kessler, or about Elizabeth Warren, or about whether the Democratic Party is a “big enough tent” to hold people of varying opinions. It’s a fight to determine whether that party will represent the public’s interests unsparingly in the years to come, or will continue to be swayed by corporate interests.

For too long the public has been deprived of the chance to vote for a party that wholeheartedly represents its economic interests. When voters come to understand the Third Way agenda and what it stands for, the resulting political shift could lead to corporate centrism’s “final moment” as the dominant faction of the Democratic Party.