Economic Opportunity Is Lowest In the Former Slave States

New Dixie has replaced the aristocracy's black slaves of Old Dixie, by the local (white) aristocracy's institutionalized bigotry against poor people, now of all ethnic groups. What used to be their purely racist bigotry has, it seems, devolved into a crushing, pervasive, classist, bigotry in the South. 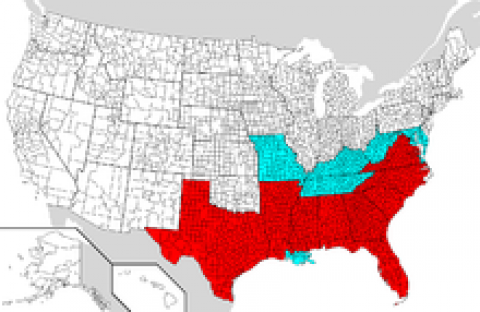 Areas covered by the 1862 Emancipation Proclamation are shown in red. Slave holding areas not covered are shown in blue.,Wikipedia

The website  Equality-Of-Opportunity.org was established this year by four leading economists from Harvard and Berkeley, and it now headlines their major findings, "Mobility in the 100 Largest Commuting Zones." It ranks all 100 largest U.S. cities for the chances of a person born poor to rise from the bottom 20% to the top 20%.

Whereas all of the top 21 cities (NYC being ranked #21) are shown clustered there closely around 10% for the given place's odds that a resident born in the bottom 20% will rise into the top 20%, all except just 3 of the bottom 21 cities are in Old Dixie; and, here, the probabilities of rising from the bottom 20% to the top 20% range widely, between just 6.7% (one-third less than in the best locales) down to merely 2.6% (around one-quarter of the probability in the best locales), among these 21 bottom-ranked cities.

In other words: virtually all of this nation's class-rigidity still remains in the U.S. South, even after the Civil War. So: New Dixie has replaced the aristocracy's black slaves of Old Dixie, by the local (white) aristocracy's institutionalized bigotry against poor people, now of all ethnic groups. What used to be their purely racist bigotry has, it seems, devolved into a crushing, pervasive, classist, bigotry in the South.

Explaining this would produce controversy, and unfortunately the researchers don't even try. However, it is a striking finding, which demands an explanation.

For a century after Abraham Lincoln was shot in 1865, the North's Protestant aristocracy increasingly supported the Republican Party, which gradually became, in a sense, the new version of the old aristocratic Southern Democratic Party, but now spread nationwide: oriented more toward concerns about the "free market," than toward concerns about democracy. Government became subordinated to economics -- and not just to any economics, but to "free market" economics, whereas economics had virtually nothing to do with the U.S. Constitution, which was instead concerned with political matters: government.

With the advent of Democratic President Franklin Delano Roosevelt, and his "New Deal" reforms and regulations during the Great Depression, and his starting of the Social Security system, this aristocratic hostility towards the Democratic Party intensified even more. Thus, in FDR's re-nomination acceptance speech in 1936, he said, "Economic royalists complain that we seek to overthrow the institutions of America. What they really complain of is that we seek to take away their power. Our allegiance to American institutions requires the overthrow of this kind of power. In vain they seek to hide behind the flag and the Constitution." This was a speech that could be given today.

Then, as if to add insult to Protestant aristocratic outrage, the Catholic Democratic President John F. Kennedy finally committed the Democratic Party against the unquestionably bigoted South; and, next, the remarkably progressive Democratic Texan President Lyndon Baines Johnson fatefully sealed this FDR-type Democratic Party, with the Civil Rights Acts, and also Medicare and Medicaid -- all done so as to serve mainly the very same people, the middle class and the poor, whom aristocrats traditionally have wanted instead to be suppressed, if not again enslaved (such as was the case in the Old South). For example, labor unions are routinely suppressed by aristocrats, because such unions challenge "the free market" -- they challenge aristocrats' hired managers, who no longer possess unrestrained control when a labor union is present.

Aristocrats call this "free market" of theirs simply "freedom," meaning actually their own freedom, but also meaning (though never mentioning) the "freedom" of millions of have-nots to suffer unto their graves (via such class-rigidity as prevails especially in the South, and in underdeveloped countries around the world). These financial elite also sometimes call this "free-market" economics "tough love." But no matter what the rationalization -- whether "freedom," or else perhaps "discipline," or even just "order" -- its result for its victims is basically like the Mafia's kiss of death; this is more that type of "love," even when the proponents themselves actually sincerely believe it to be some sort of "love," for the people who are actually suffering from this one-sided "freedom" of the aristocracy.

Republicans are proud of this "freedom," or "discipline," or "tough love": they even sometimes call it "the opportunity society." That's what pervades the South -- the very same region of this country where economic opportunity is actually the very lowest.

However, apparently enough Americans support this Orwellian operation, so that Republicans constitute a major Party, which even includes some of the very same people who suffer from it. This is the only way to explain the continued existence of the Republican Party as being a major political party in the U.S.

Nonetheless, unfortunately, this does not mean that today's Democratic Party is actually in favor of the poor -- the Democratic Party of today just doesn't hate them as Republicans do. The clearest evidence that this is the case came in a different study:

Furthermore, "Senators seem to have been a good deal more responsive to upper-income constituents when a Republican was in the White House ... than they were with a Democrat in the White House." Perhaps this is the reason, then, why even with a conservative Democratic President such as Obama, today's far-rightwing Republican Party cannot get much of its wish-list filled. Moreover, Bartels found "surprisingly strong and consistent evidence that the biases I have identified in senators' responsiveness to rich and poor constituents are not due to differences between rich and poor constituents in [electoral] turnout, political knowledge, or contacting." In common parlance: Bartels found that ideology alone accounts for this difference.

He also considered the possibility posed by a 1995 study, which had shown that, "citizens in the top quarter of the income distribution ... provided almost three quarters of the total campaign contributions." Could that be the answer -- Senators were simply voting for their contributors? Bartels found that only "two of the eight salient roll call votes [concerning the minimum wage, and abortion]" in his study could reasonably be explained on the basis mainly of campaign contributions; the other six could not.

It might also be worth noting that, even today, the purely racist tendency of the aristocracy is so great that it often is  even strong enough to outweigh their greed -- discrimination is practiced even when it's unprofitable . So: the traditional leftist "explanation" for conservatism (that it's purely based on greed) is false. The understanding that leftists have of rightists is basically the mirror-image of the way Fox "News" characterizes leftists.

This present news report might sound instead somewhat like an op-ed, because the subject here is ideology. However, the scientific studies that are being reported here constitute solid scientific findings, not opinions, and reporting them might come as interesting news to many readers, because our news-media unfortunately tend to be reluctant to report as news even the best scientific findings about ideology. But there is a difference between reporting on ideology, versus applying ideology (which an op-ed is supposed to do). This is therefore a news story, which brings together many studies that concern people's ideology. If it happens to surprise anyone, then that would be simply because the major mainstream "news"media's "neutrality" and "nonpartisanship" have required that they avoid reporting such facts as have been reported here. A lot of important facts are unreported for that reason. However, their being unreported has nothing to do with there being anything dubious about them.