These computers are not programmed instead, connections between the circuits are “weighted” according to correlations in data that the processor has already “learned.” Those weights are then altered as data flows in to the chip, causing them to change their values. That generates a signal that travels to other components and, in reaction, changes the neural network, programming the next actions much the same way that information alters human thoughts and actions. 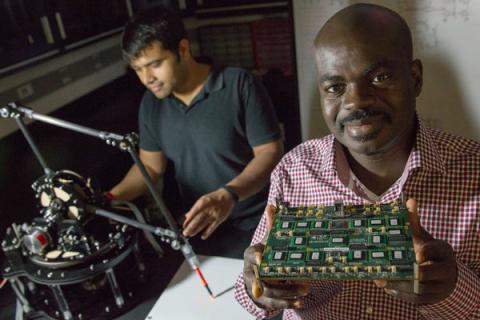 PALO ALTO, Calif. — Computers have entered the age when they are able to learn from their own mistakes, a development that is about to turn the digital world on its head.

The first commercial version of the new kind of computer chip is scheduled to be released in 2014. Not only can it automate tasks that now require painstaking programming — for example, moving a robot’s arm smoothly and efficiently — but it can also sidestep and even tolerate errors, potentially making the term “computer crash” obsolete.

The new computing approach, already in use by some large technology companies, is based on the biological nervous system, specifically on how neurons react to stimuli and connect with other neurons to interpret information. It allows computers to absorb new information while carrying out a task, and adjust what they do based on the changing signals.

In coming years, the approach will make possible a new generation of artificial intelligence systems that will perform some functions that humans do with ease: see, speak, listen, navigate, manipulate and control. That can hold enormous consequences for tasks like facial and speech recognition, navigation and planning, which are still in elementary stages and rely heavily on human programming.

Designers say the computing style can clear the way for robots that can safely walk and drive in the physical world, though a thinking or conscious computer, a staple of science fiction, is still far off on the digital horizon.

“We’re moving from engineering computing systems to something that has many of the characteristics of biological computing,” said Larry Smarr, an astrophysicist who directs the California Institute for Telecommunications and Information Technology, one of many research centers devoted to developing these new kinds of computer circuits.

Conventional computers are limited by what they have been programmed to do. Computer vision systems, for example, only “recognize” objects that can be identified by the statistics-oriented algorithms programmed into them. An algorithm is like a recipe, a set of step-by-step instructions to perform a calculation.

But last year, Google researchers were able to get a machine-learning algorithm, known as a neural network, to perform an identification task without supervision. The network scanned a database of 10 million images, and in doing so trained itself to recognize cats.

In June, the company said it had used those neural network techniques to develop a new search service to help customers find specific photos more accurately.

The new approach, used in both hardware and software, is being driven by the explosion of scientific knowledge about the brain. Kwabena Boahen, a computer scientist who leads Stanford’s Brains in Silicon research program, said that is also its limitation, as scientists are far from fully understanding how brains function.

“We have no clue,” he said. “I’m an engineer, and I build things. There are these highfalutin theories, but give me one that will let me build something.”

Until now, the design of computers was dictated by ideas originated by the mathematician John von Neumann about 65 years ago. Microprocessors perform operations at lightning speed, following instructions programmed using long strings of 1s and 0s. They generally store that information separately in what is known, colloquially, as memory, either in the processor itself, in adjacent storage chips or in higher capacity magnetic disk drives.

The data — for instance, temperatures for a climate model or letters for word processing — are shuttled in and out of the processor’s short-term memory while the computer carries out the programmed action. The result is then moved to its main memory.

The new processors consist of electronic components that can be connected by wires that mimic biological synapses. Because they are based on large groups of neuron-like elements, they are known as neuromorphic processors, a term credited to the California Institute of Technology physicist Carver Mead, who pioneered the concept in the late 1980s.

They are not “programmed.” Rather the connections between the circuits are “weighted” according to correlations in data that the processor has already “learned.” Those weights are then altered as data flows in to the chip, causing them to change their values and to “spike.” That generates a signal that travels to other components and, in reaction, changes the neural network, in essence programming the next actions much the same way that information alters human thoughts and actions.

“Instead of bringing data to computation as we do today, we can now bring computation to data,” said Dharmendra Modha, an I.B.M. computer scientist who leads the company’s cognitive computing research effort. “Sensors become the computer, and it opens up a new way to use computer chips that can be everywhere.”

The new computers, which are still based on silicon chips, will not replace today’s computers, but will augment them, at least for now. Many computer designers see them as coprocessors, meaning they can work in tandem with other circuits that can be embedded in smartphones and in the giant centralized computers that make up the cloud. Modern computers already consist of a variety of coprocessors that perform specialized tasks, like producing graphics on your cellphone and converting visual, audio and other data for your laptop.

One great advantage of the new approach is its ability to tolerate glitches. Traditional computers are precise, but they cannot work around the failure of even a single transistor. With the biological designs, the algorithms are ever changing, allowing the system to continuously adapt and work around failures to complete tasks.

Traditional computers are also remarkably energy inefficient, especially when compared to actual brains, which the new neurons are built to mimic.

I.B.M. announced last year that it had built a supercomputer simulation of the brain that encompassed roughly 10 billion neurons — more than 10 percent of a human brain. It ran about 1,500 times more slowly than an actual brain. Further, it required several megawatts of power, compared with just 20 watts of power used by the biological brain.

Running the program, known as Compass, which attempts to simulate a brain, at the speed of a human brain would require a flow of electricity in a conventional computer that is equivalent to what is needed to power both San Francisco and New York, Dr. Modha said.

I.B.M. and Qualcomm, as well as the Stanford research team, have already designed neuromorphic processors, and Qualcomm has said that it is coming out in 2014 with a commercial version, which is expected to be used largely for further development. Moreover, many universities are now focused on this new style of computing. This fall the National Science Foundation financed the Center for Brains, Minds and Machines, a new research center based at the Massachusetts Institute of Technology, with Harvard and Cornell.

The largest class on campus this fall at Stanford was a graduate level machine-learning course covering both statistical and biological approaches, taught by the computer scientist Andrew Ng. More than 760 students enrolled. “That reflects the zeitgeist,” said Terry Sejnowski, a computational neuroscientist at the Salk Institute, who pioneered early biologically inspired algorithms. “Everyone knows there is something big happening, and they’re trying find out what it is.”