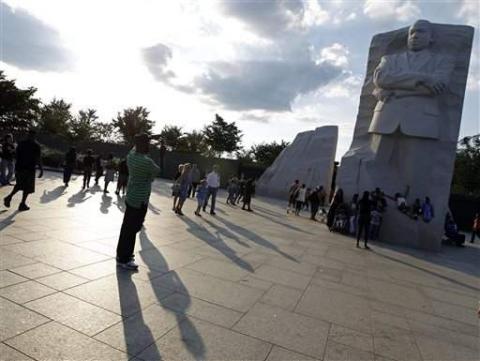 People visit the Martin Luther King Jr. Memorial after the march to commemorate the 50th anniversary of the 1963 March on Washington at the Lincoln Memorial in Washington on Aug. 24,AP

“What does it profit a man to be able to eat at an integrated lunch counter if he doesn’t have enough money to buy a hamburger?” Martin Luther King, Jr. asked in 1968.

King is most widely remembered for his leadership in the civil rights movement, but also he insisted throughout his public life that gains toward racial equality must be accompanied by living wages for all working people.

The March on Washington for Jobs and Freedom, where King delivered his famous “I Have A Dream” speech, called for civil rights but also for a minimum wage that would “give all Americans a decent standard of living.” Organizers of the march estimated that to be at least $2 per hour. Adjusted for inflation, that would be more than $15 today.

Throughout 2013, the 50th anniversary of the March on Washington, low-wage workers captivated the American public with bold, courageous action in a struggle for living wages. Fast-food and retail workers went on strike, calling for a $15 hourly wage, challenging some of the country’s largest and most profitable corporations. Clergy, community organizations and unions representing low-wage workers launched dozens of campaigns to win higher state minimum wage laws and local “living wage” ordinances.

At the time of his assassination, while in Memphis supporting sanitation workers striking for dignity on the job and in their paychecks, King envisioned a nationwide “Poor People’s Campaign” to help low-wage workers form unions and to raise the minimum wage to a livable income.

Were he alive today, King likely would be on the picket lines with striking fast-food and Wal-Mart workers, speaking at rallies calling for a dramatic increase in the minimum wage, and standing with janitors, hospitality workers and airport workers fighting for a union.

In his time, King called economic inequality “shocking and inhumane.” Sadly, while the nation has made some progress on racial equality, with much more to do, income inequality has grown to staggering levels. Wages for average workers have been flat for decades, and actually decreased for the working poor. Corporate profits never have been higher and the wealth of the richest Americans is greater than any time since the Gilded Age. Only significant increases in wages can address this dangerous, unjust income inequality As we reflect on the critical role King played in the history of our nation, a “community of conscience,” as he termed it, should take up his call for economic justice alongside the pursuit of racial equity. Raising the minimum wage at the federal and state levels is one key step.

Had it kept pace with inflation since the time of King’s murder in 1968, the minimum wage would be nearly $11 per hour; had it grown with the productivity of American workers, it would be roughly $17 per hour.

Instead of more poverty for African-American, Latino and white working people from a $7.25 minimum wage, it should lift up families to create the opportunity and security embraced in King’s vision of a just, equitable society.

The time is now for a living wage and economic justice.

William P. Jones is a history professor at the University of Wisconsin-Madison and the author of “The March on Washington: Jobs, Freedom and the Forgotten History of Civil Rights.” Peter Rickman is a labor and community organizer with Wisconsin Jobs Now. They can be reached at wjones3@wisc.edu