labor Workers of the World, Faint!

Three years ago, when the Cambodian minimum wage was $61 per month, 200,000 workers took to the streets to ask for a raise. It was the largest-ever strike in the garment sector, but, after just three days, it came to an anticlimactic halt due to police violence and threats against union leaders. Then the "neak ta" appeared. Mass faintings in factories spread throughout Cambodia, and employers' took notice. 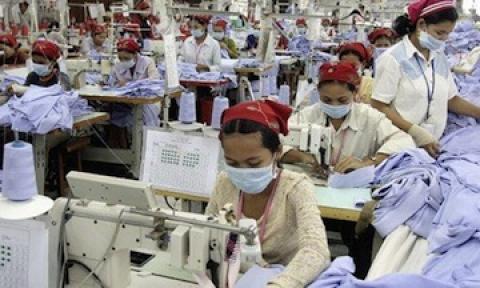 PHNOM PENH, Cambodia — Just over two years ago, at the Anful Garments Factory in Kompong Speu Province, a young worker named Chanthul and 250 of her colleagues collapsed in a collective spell of fainting. They had to be hospitalized; the production line shut down.

Two days later, the factory was back up, and the mass faintings struck again. A worker started barking commands in a language that sounded like Chinese and, claiming to speak in the name of an ancestral spirit, demanded offerings of raw chicken. None were forthcoming, and more workers fell down. Peace, and production, resumed only after factory owners staged an elaborate ceremony, offering up copious amounts of food, cigarettes and Coca-Cola to the spirit.

This episode, however bizarre, was not singular. In the past few years, Cambodia has experienced a slew of mass faintings among garment workers: One after the other, hundreds of women have fallen to the floor of their factories in a dizzy spell called duol sonlap in the Khmer language. The swooning has been attributed, variously, to heat, anemia, overwork, underventilation, chemical fumes and food poisoning. But according to one group of medical anthropologists and psychologists who have studied the phenomenon, two-thirds of these episodes are associated with accounts of possession by local guardian spirits, known as neak ta.

The mass faintings have paralyzed production, to the consternation of the government, factory owners and international clothing retailers. The United States opened its market to Cambodian exports in the 1990s, and the garment industry in Cambodia has since become a $5 billion-a-year business. According to the country’s Garment Manufacturers Association, there are now over 600 garment factories, most owned by Taiwanese, Korean, Chinese, Hong Kong and Singaporean companies. Many were hastily erected on the dusty outskirts of Phnom Penh and in a few other free-trade zones — on land where people believe neak ta have lived for generations.

Although Theravada Buddhism has been the official religion of Cambodia since the 13th century, it never supplanted the existing pantheon of ancestral spirits, local gods and Brahamanic deities. Perhaps the most important of these is the neak ta, a spirit strongly associated with a specific natural feature — a rock, a tree, a patch of soil. These spirits represent a village-based morality and are inseparable from the land. This connection is so strong that in past times even some kings were seen to be merely renting the land from neak ta.

Like those kings of old, Cambodia’s deeply superstitious prime minister, Hun Sen, in power for almost three decades, calls on land and water spirits to curse his enemies. Most Cambodians today, while Buddhist, ply spirits with tea and buns at small altars.

These days, when neak ta appear on the factory floor — inducing mass faintings among workers and shouting commands at managers — they are helping the cause of Cambodia’s largely young, female and rural factory workforce by registering a kind of bodily objection to the harsh daily regimen of industrial capitalism: few days off; a hard bed in a wooden barracks; meager meals of rice and a mystery curry, hastily scarfed down between shifts. These voices from beyond are speaking up for collective bargaining in the here and now, expressing grievances much like the workers’ own: a feeling that they are being exploited by forces beyond their control, that the terms of factory labor somehow violate an older, fairer moral economy.

Early last year, I met a 31-year-old woman called Sreyneang, a worker at Canadia Industrial Park, west of Phnom Penh. She had recently caused dozens of her co-workers to collapse after speaking in the voice of a neak ta. While entranced, she had also assaulted the president of the factory’s government-aligned union, pounding him with her fists and pelting him with insults.

We chatted on the dirt floor of the tiny wooden house where she lived; there was nowhere else to sit. She said she had been feeling ill on the day of the fainting, and that the factory nurse had refused to let her go home. She did not remember most of what had happened next, but a spirit healer later explained that a neak ta had entered her, infuriated that a banyan tree on the factory site which had been his home for centuries was chopped down, with neither ritual propitiation nor apology, during the construction of the building.

A few months after that event, something similar happened at a sporting-goods factory near the capital that was said to have been haunted ever since it opened in August 2012. Female workers asked their supervisor, a man named Ah Kung, if they could hold a ceremony and offer a chicken to a neak ta angered at being displaced from the site. He refused. Two days later, the spirit entered the body of a young female worker, Sreymom, and claiming, in her voice, to have been “looked down upon,” began shouting in a mixture of Khmer and short, quick syllables her colleagues took to be Chinese. Several dozen other workers lost consciousness and had to be treated at a local clinic.

Julia Wallace is executive editor of The Cambodia Daily in Phnom Penh.