Over One Million Voices to European Parliament: Stop Water Privatization

First European Citizens' Initiative calls for water to be human right, not a commodity. 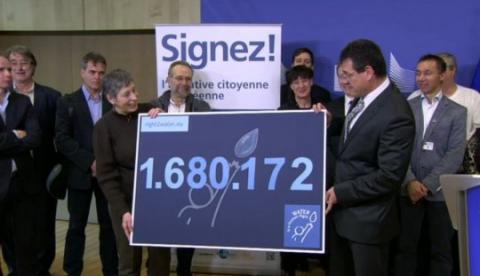 A spokesperson for the Right2Water ECI and European Commission Vice-President Šefčovič (right) hold a sign showing the number of signatories submitted by organizers on Monday. , screengrab from EC video

Nearly nearly 1.7 million Europeans symbolically brought their voices to Brussels on Monday to say "water is a human right," not a commodity to be privatized.

The campaign behind this first ECI, the Right2water, has three main goals. "Implement the human right to water, do not liberalize water services in the EU and do more to ensure people across the world have access to clean and safe water," stated Jan Willem Goudriaan, vice-president of the ECI Right2Water.

"We want the EU to change their mind-set from its current focus on competition and completely market-based approach, to a public service attitude and a rights-based approach. Water is a limited natural resource and a public good fundamental for life and health. It is a ‘natural’ monopoly and must be kept out of internal market rules," the campaign adds on its website.

This rights-based approach is far from controversial, Gabriella Zanzanaini, Director of European Affairs for the watchdog group Food & Water Europe, told Common Dreams in an email.  "Time and time again through referendums and petitions, citizens have made it evident that they do not want water to be treated as a commodity and that it should be a public service," she stated.

Representatives of Right2Water, which has the backing of the European Anti Poverty Network, European Public Health Alliance and the European Trade Union Confederation, presented their proposal to Commission Vice-President Šefčovič and senior Commission officials, and had a public hearing in the European Parliament.

At the hearing, Zanzanaini said, it was "also mentioned that for every dollar invested in water, the social return is many times higher. In austerity-hit countries, it is especially important that privatization does not occur as people cannot afford to pay even higher bills."

"What the troika has been doing actually goes against the EU Treaty," she continued.  "It was mentioned many times today that the water management model falls under a Member States competency and not the EU, and yet by imposing water privatization through loan conditionalities on countries like Greece and Portugal it is doing the opposite."

Speaking to press ahead of the hearing, Šefčovič said it was a "good day for grassroots democracy," while a spokesperson from Right2Water said she was happy to be there "not only to present our initiative but also our demands. We'll see now how we can organize to make this demand, to make water... a human right."

The Commission has until 20 March to decide on its response to the initiative.