The Vietnam War has doomed President Lyndon Johnson to a lowly status among presidents, overshadowing his domestic successes. But LBJ's ranking might change if the new evidence on Richard Nixon sabotaging LBJ's Vietnam peace talks were factored in, writes Robert Parry. 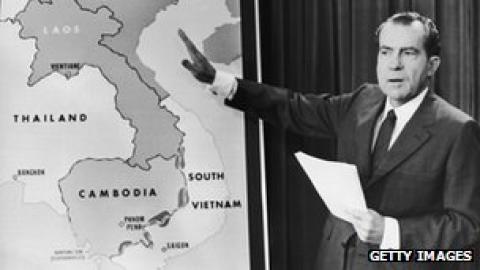 New documents show that Richard Nixon sabotaged peace talks in 1968, to help sway the upcoming November 1968 election. Nixon was elected, and soon began an even more massive escalation of the war., BBC (UK)

Pegged to Presidents' Day weekend - and the upcoming half-century anniversary of many LBJ accomplishments - the article cites a recent CNN/ORC poll asking Americans how they rated the last nine presidents and putting Johnson at number seven behind Jimmy Carter and ahead of only George W. Bush and Richard Nixon.

But what isn't addressed in the article is how Americans might have assessed Johnson if his plan for ending the Vietnam War in 1968 had not been sabotaged by Nixon's presidential campaign, a reality now well established by documents and tape-recordings declassified by the National Archives but still outside the frame of most mainstream journalists and ignored by conventional historians.

I encountered this "lost history" when doing research at the Lyndon Johnson Library in Austin, Texas, in 2012 and published a lengthy story at Consortiumnews.com and in my latest book, America's Stolen Narrative. After my reporting, the BBC published an account in 2013 recognizing the significance of the new evidence.

But there appears to be a stubborn refusal at places like the New York Times and among establishment historians, like Doris Kearns Goodwin, to acknowledge this new material. Perhaps they're waiting for the ponderous LBJ authority Robert Caro to bless the information in his final volume on the 36th President.

Or perhaps it would embarrass them too much for having missed this crucial material in their own writings about Johnson. Or maybe they think the evidence seems too conspiratorial, including the fact that many of the documents are contained in a file that LBJ's national security adviser Walt Rostow labeled "The `X' Envelope" and that archivists at the library privately call their "X-File."

Whatever the reason, the failure to address this remarkable cache of evidence has distorted how Americans regard Johnson. It would seem to me that if the people knew that Johnson really was committed to bringing the war to an end before he left office, they might view him more charitably and regard Nixon with even greater contempt.

That wouldn't mean that Johnson would - or should - escape blame for his decisions that sent a half-million U.S. combat troops to Vietnam and inflicted unspeakable carnage on the people of Indochina. More than 30,000 American soldiers died during LBJ's presidency along with possibly a million Vietnamese.

While Johnson's defenders have called him a reluctant warrior - his daughter was quoted as saying "nobody wanted that war less than Lyndon Johnson" - he nevertheless signed off on the decisions that dispatched the troops and ordered the bombing campaigns. Even if he felt cornered by the ghosts of Joe McCarthy and other anti-communist zealots, Johnson still was the chief executive principally responsible for the catastrophe.

Yet, what is also clear from the new evidence is that Johnson genuinely wanted to bring the war to an end before he left office. Many Americans, including myself, had long doubted Johnson's sincerity. After all, there had been many lies that paved the way into the hell of the Vietnam War - and Johnson had told his share of them.

However, when I began listening to the audiotapes of Johnson phone conversations from fall 1968 and began reviewing the documents from Rostow's "The `X' Envelope," I couldn't escape the conclusion that Johnson was committed to ending the war as quickly as possible.

When Johnson learned of Nixon's sabotage of the Paris peace talks - by getting South Vietnamese President Nguyen van Thieu to boycott them in exchange for promises of a better deal under a Nixon administration - LBJ referred to the maneuver as "treason" and fumed to his confidantes, including Republican Senate Minority Leader Everett Dirksen.

And among the White House inner circle, Johnson seemed the most inclined to go public with the evidence before the 1968 election, but he was dissuaded by several top aides, including Defense Secretary Clark Clifford who told Johnson, "Some elements of the story are so shocking in their nature that I'm wondering whether it would be good for the country to disclose the story and then possibly have a certain individual [Nixon] elected."

This new history on Nixon's "treason" also changes our understanding of the Watergate scandal, which began to take shape nearly three years later. The fact that Johnson in January 1969 secretly ordered Rostow to take with him the file on Nixon's peace-talk sabotage - what Rostow then labeled "The `X' Envelope" - clarifies the longstanding mystery of why Nixon launched his "Plumbers" operation in June 1971, thus setting in motion what would become the Watergate scandal.

In June 1971, after U.S. newspapers began publishing Daniel Ellsberg's leaked Pentagon Papers which catalogued mostly Democratic lies about Vietnam through 1967, Nixon immediately recognized his own vulnerability to a possible sequel if the missing file on his 1968 treachery ever surfaced.

After entering the White House in 1969, Nixon was told by FBI Director J. Edgar Hoover about the existence of the file but a search by top aides, Henry Kissinger and H.R. "Bob" Haldeman, failed to locate it. So, on June 17, 1971, as the Pentagon Papers dominated the front pages of American newspapers, Nixon ordered a redoubling of the search for the missing 1968 file, even to the point of authorizing a break-in at the Brookings Institution where Nixon thought the file might be.

In other words, understanding the significance of Nixon's "treason" in 1968 not only changes the accepted history of the Vietnam War and of Johnson's presidency, but it could fundamentally alter the conventional wisdom about Watergate as well.

In one small blessing, this fuller understanding of Watergate - and what Nixon was desperate to cover up - might finally drive a stake through the heart of the Watergate-era trope endlessly recited by the mainstream U.S. news  media that "the cover-up is always worse than the crime!" That silliness might not survive a recognition that the "crime" that Nixon was ultimately covering up was his treachery that blocked peace talks which might have saved the lives of more than 20,000 U.S. soldiers and maybe a million more Vietnamese.  [See Consortiumnews.com's "The Dark Continuum of Watergate."]

But perhaps two such radical rewrites of supposedly well-known histories - the Vietnam War and Watergate - were too much for the likes of the New York Times and establishment historians to absorb. Indeed, knowing the fuller story might make them look like utter incompetents for missing such important aspects of two pivotal events from such a recent era.

So, for the purpose of face-saving at least, it might make more sense for the Times and "respected historians" to simply leave the old narratives in place, even if that distortion of history serves to further discredit President Johnson and his historic accomplishments.

[Investigative reporter Robert Parry broke many of the Iran-Contra stories for The Associated Press and Newsweek in the 1980s.]