What Happens When the Man Standing His Ground Isn't White?

This is not a retributionist fantasy. This is simply following a pattern of action and reaction through to its logical endpoint. 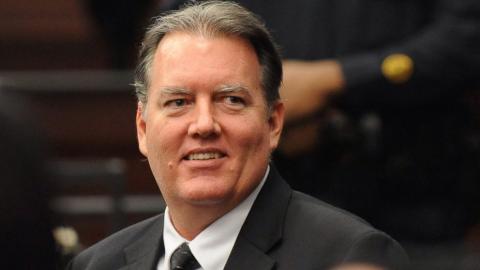 This is a question about Jordan Davis and Michael Dunn and about us.

Davis should’ve turned 19 on Sunday. Instead, he’s dead, the victim of a middle-aged white man named Michael Dunn outside a Jacksonville, Florida, gas station who, to break down the steps:

a) took issue with the volume of rap music playing in the SUV in which Davis was riding,

b) decided to confront the teens about the music,

c) took his nine-millimeter handgun out of his glove compartment and fired nine shots into the car full of teenagers,

d) drove to a hotel,

A night’s sleep behind him, the next day Dunn decided that shooting nine rounds into a car would perhaps be worthy of a police report, and contacted a friend in law enforcement about turning himself in.

While sitting in jail before and during his trial, Dunn wrote dozens of letters to family members and attorneys. He made little secret of his disdain for the black people around him. Dunn, verbatim:

"The Jail is full of blacks and they all act like thugs. This may sound a bit radical but if more people would arm themselves and kill these fucking idiots when they're threatening you, eventually they may take the hint and change their behavior."

In court, Dunn testified that he felt “threatened” by Davis and his friends, and fired into the vehicle because he thought Davis was about to get active with a shotgun. Dunn claimed self-defense. No gun was ever found in the car Davis was in. Dunn’s girlfriend testified that her partner had never even mentioned anything about Davis and his friends having a weapon at the time of the killing. Witnesses testified to Dunn’s violent temper. And yet last Saturday, the day before what should have been Davis’ 19th birthday, a jury was unable to come to a verdict in the murder case against Michael Dunn. (Dunn was convicted on lesser counts and will, in all likelihood, spend most of the rest of his life in prison. But on the charge specific to his killing of Davis—murder one—the jury hung itself.)

I spent a long ride on the Chicago El late Saturday night thinking about Jordan Davis. Over text message and Facebook I heard from friends of mine, parents to black boys, who were in agony. As one father put it, he was bracing to once again have the conversation—the one about “The Rules”—with his two beautiful sons who are coming into their teenage years and, thus, into the time of their greatest risk. In a moment of which I’m not proud, I remarked to my girlfriend that I hoped that if I ever had sons, they wouldn’t have skin any darker than my own. I went home and I slept like shit.

I got up early the next day thinking less about Jordan Davis and more about Michael Dunn. I cannot muster a compassion as great as Davis’ mom, Lucia McBath, who said that despite what he had done to her boy, she’d pray for Dunn. But I do think about him, and when I do, I think about the next Michael Dunn. And I think about what happens when, after one or five or 10 more George Zimmermans and Michael Dunns and Trayvon Martins and Jordan Davises, the Martins and Davises shoot the Zimmermans and Dunns rather than the other way around.

This is not a retributionist fantasy.

This is simply following a pattern of action and reaction through to its logical endpoint.

Dunn is not unique in his conditioning to see threat in the bodies and “cultures” (whatever the hell Dunn means by that) of black boys and men. And American law, rather than gravitating toward correcting its historic disregard for protecting victims of violence, is instead moving in an opposite direction. Indeed, as University of Colorado-Boulder professor of law Paul Campos explained, laws like "Stand Your Ground," and self-defense claims deployed in the way that Dunn used them, do little less than to ask dead men to tell tales. Campos:

“The prosecution had to prove beyond a reasonable doubt that Dunn’s claim that he had a reasonable fear he was about to suffer great bodily harm was false. Such laws, in effect, put the victim rather than the killer on trial, which is exactly what happened in this case.”

Davis’s lawyers, in other words, had to somehow show that Dunn didn’t feel “threatened.”

And so what happens when another self-appointed vigilante like George Zimmerman or Michael Dunn starts a confrontation with a black kid, maybe with a kid who’s learned lessons from the killings of Martin and Davis? What happens when that kid feels threatened—not “threatened” in the vague fashion of Michael Dunn but threatened in a way that reverberates with the most poundingly precise and brutal traditions of American racism, and that pulses with the currency of knowing what can happen to black boys in America when they’re confronted by white men.

What happens when that kid takes the approach of Dunn? What happens when he reaches for a gun first and asks questions later, and when Dunn or someone like him is the one whose life has leaked out on the pavement? What happens after the conservative talking heads lose their minds about a race war and about the pathologies of black “culture” (there’s that word again), and after a jury rejects the kid’s self-defense claim and finds him guilty (would it be any other way?)?

This is not a call for blood.

This is simply a question about Jordan Davis and Michael Dunn and about us. It is about the long battle at the center of American society. The battle of slaves and freedpeople and abolitionists, of civil rights workers and Black Power militants. And oppositionally though just as much, the battle of slave traders and fire-eaters and the Taney Court, of Klansmen and Jon Burge. The battle over whether or not the U.S. will someday become the actual, functional, multiracial society and democracy that it purports to be.

The battle that rages in America, now and seemingly forever.

This is how we lose it.

Simon Balto is a Ph.D. candidate in history at the University of Wisconsin-Madison.