Under Secretary of State Sherman also suggested at one point that there would be no real need to prohibit any Iranian missile if the negotiations on the nuclear programme were successful. “Not having a nuclear weapon,” she said, “makes delivery systems almost — not wholly, but almost — irrelevant.” That admission underlined the wholly political purpose of the administration’s apparent embrace of the Israeli demand that Iran negotiate limits on its ballistic missiles. 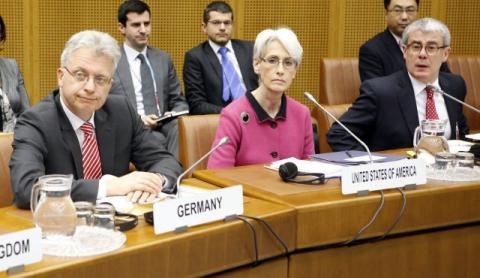 U.S. Under Secretary of State Wendy Sherman (center) attends the nuclear talks with Iran at the UN headquarters in Vienna, Austria, Feb. 18, 2014.,AFP/Haaretz

WASHINGTON, Feb 22 2014 (IPS) - The Barack Obama administration’s insistence that Iran discuss its ballistic missile programme in the negotiations for a comprehensive nuclear agreement brings its position into line with that of Israel and senators who introduced legislation drafted by the pro-Israel lobby group AIPAC aimed at torpedoing the negotiations.

But the history of the issue suggests that the Obama administration knows that Iran will not accept the demand and that it is not necessary to a final agreement guaranteeing that Iran’s nuclear programme is not used for a weapon.

The demand for negotiations on Iran’s missile programme originated with Israel, both directly and through Senate Foreign Relations Committee members committed to AIPAC’s agenda.

White House spokesman Jay Carney highlighted the new U.S. demand in a statement Wednesday that the Iranians “have to deal with matters related to their ballistic missile program.”

Carney cited United Nations Security Council resolution 1929, approved in 2010, which prohibited any activity related to ballistic missiles capable of delivering nuclear weapons, including missile launches. “So that’s completely agreed by Iran in the Joint Plan of Action,” he added.

Iranian Foreign Minister Mohammad Javad Zarif not only explicitly contradicted Carney’s claim that Iran had agreed to discuss ballistic missiles but warned that a U.S. demand for discussion of its missile programme would violate a red line for Iran.

“Nothing except Iran’s nuclear activities will be discussed in the talks with the [six powers known as the P5+1], and we have agreed on it,” he said, according to Iran’s IRNA.

The pushback by Zarif implies that the U.S. position would seriously risk the breakdown of the negotiations if the Obama administration were to persist in making the demand.

Contrary to Carney’s statement, the topic of ballistic missiles is not part of the interim accord reached last November. The Joint Plan of Action refers only to “addressing the UN Security Council resolutions, with a view toward bringing to a satisfactory conclusion the UN Security Council’s consideration of this matter” and the formation of a “Joint Commission” which would “work with the IAEA to facilitate resolution of past and present issues of concern”.

It is not even clear that the U.S. side took the position in the talks last fall that Iran’s missile programme had to be on the table in order to complete a final agreement. But in any event it was not part of the Joint Plan of Action agreed on Nov. 24.

Past U.S. statements on the problem of the Security Council resolutions indicate that the administration had previously acknowledged that no agreement had been reached to negotiate on ballistic missiles and that it had not originally intended to press for discussions on the issue.

The “senior administration officials” who briefed journalists on the Joint Plan of Action last November made no reference to ballistic missiles at all. They referred only to “possible military dimensions” of the Iranian nuclear programme and to “Iranian activities at Parchin”.

The demand for negotiations on Iran’s missile programme originated with Israel, both directly and through Senate Foreign Relations Committee members committed to AIPAC’s agenda.

Citing an unnamed senior Israeli official, Ha’aretz reported Thursday that Israeli Minister of Strategic Affairs Yuval Steinitz had met with Sherman and senior French and British foreign ministry officials before the start of the February talks and had emphasised that Iran’s missile programme “must be part of the agenda” for negotiation of a final agreement.

By early December, however, Israel was engaged in an even more direct effort to pressure the administration to make that demand, drafting a bill that explicitly included among its provisions one that would have required new sanctions unless the president certified that “Iran has not conducted any tests for ballistic missiles with a range exceeding 500 kilometers.”

Since Iran had obviously tested missiles beyond that limit long ago, it would have made it impossible for Obama to make such a certification.

Although the bill was stopped, at least temporarily, in the Senate when enough Democratic members refused to support it, Republicans continued to attack the administration’s negotiating position, and began singling out the administration’s tolerance of Iranian missiles in particular.

After a highly distorted picture of Iran’s readiness to build a nuclear weapon, Corker asked, “Why did you all not in this agreement in any way address the delivery mechanisms, the militarizing of nuclear arms? Why was that left off since they breached a threshold everyone acknowledges?”

But instead of correcting Corker’s highly distorted characterisation of the situation, Sherman immediately reassured him that the administration would do just what he wanted them to do.

Sherman admitted that the November agreement covering the next months had not “shut down all the production of any ballistic missile that could have anything to do with delivery of a nuclear weapon.” Then she added, “But that is indeed something that has to be addressed as part of a comprehensive agreement.”

Sherman also suggested at one point that there would be no real need to prohibit any Iranian missile if the negotiations on the nuclear programme were successful. “Not having a nuclear weapon,” she said, “makes delivery systems almost — not wholly, but almost — irrelevant.”

That admission underlined the wholly political purpose of the administration’s apparent embrace of the Israeli demand that Iran negotiate limits on its ballistic missiles.

The Obama administration may be seeking to take political credit for a hard line on Iranian missiles in the knowledge that it will not be able to get a consensus for that negotiating position among the group of six powers negotiating with Iran.

Russia’s Deputy Foreign Minister Sergei Rybakov clearly implied that Moscow would not support such a demand in a statement Thursday that Russia “considers that a comprehensive agreement must concern only and exclusively the restoration of trust in a purely peaceful intention of Iran’s nuclear program.”

Although U.S., European and Israeli officials have asserted consistently over the years that Iran’s medium-range ballistic missiles are designed to carry nuclear weapons, Israel’s foremost expert on the Iranian nuclear programme, Uzi Rubin, who managed Israel’s missile defence programme throughout the 1990s, has argued that the conventional analysis was wrong.

In an interview with the hardline anti-Iran Wisconsin Project on Nuclear Arms Control in September 2009, Rubin said, “The Iranians believe in conventional missiles. Not just for saturation but also to take out specific targets…. Remember, they have practically no air force to do it. Their main striking power is based on missiles.”

Since 2008, the International Atomic Energy Agency has accused Iran of working on integrating a nuclear weapon into the Shahab-3 missile reentry vehicle in 2002-2003, based on a set of drawings in a set of purported Iranian documents. The documents were said by the George W. Bush administration to have come from the purloined laptop of a participant in an alleged Iranian nuclear weapons research programme.

But that account turned to be a falsehood, as were other variants on the origins of the document. The documents actually came from the Mujahedin-e-Khalq, the anti-regime organisation then listed as a terrorist organisation by the U.S. State Department, according to two German sources.

Karsten Voigt, who was the German foreign office coordinator, publicly warned about the MEK provenance of the papers in a November 2004 interview with the Wall Street Journal.

Voigt, who retired from the foreign office in 2010, recounted the story of how an MEK member delivered the papers to German intelligence in 2004 in an interview last year for a newly-published book by this writer.

Gareth Porter, an investigative historian and journalist specialising in U.S. national security policy, received the UK-based Gellhorn Prize for journalism for 2011 for articles on the U.S. war in Afghanistan. His new book “Manufactured Crisis: the Untold Story of the Iran Nuclear Scare”, was published Feb. 14.