"The chaos created by extreme weather has been compounded by the chaos of deregulated energy markets and profit-driven corporations who care little about workers and the interests of the public." - D. Michael Langford, president of the Utility Workers Union of America 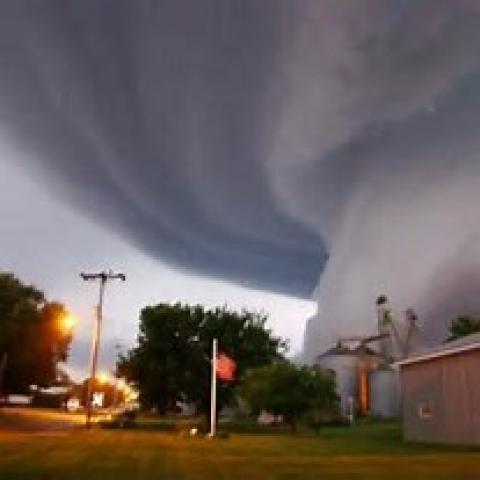 Can we really expect to emit 577 billion tons of CO2 and not cause major problems for the earth's climate? That is the amount of CO2 humans have put into the earth's delicately balanced atmosphere since the dawn of the industrial age. It has warmed the earth in ways that has increased moisture in the air and raised sea levels. The connection between CO2 emissions and extreme weather is today indisputable.

Extreme weather events (EWEs) are linked to emissions levels, which are being driven upward by extreme energy. Tar sands oil, shale gas, and other `unconventional' fossil fuels are more polluting than conventional fossil fuels.  Together, these fuels continue to meet the bulk of the worlds growing energy demand. Yes, renewable energy is growing too - but it is not displacing fossil-based power. Levels of coal, oil and gas consumption are rising globally. Coal use has risen a staggering 60% since year 2000, according to the International Energy Agency. If present trends continue, the world is looking at somewhere between 3.7 and 4 degrees Celsius of global warming by year 2100.

And it is not just CO2 we have to worry about. The blasting open of the earth for coal and the `fracturing' of shale rock formations for gas is releasing levels of methane that, recent studies from Cornell and Harvard show, are presently high enough to almost cook the planet on their own. If the warming impact of methane is given full consideration, the planet will warm by 1.5 to 2 degrees Celsius in 17 to 35 years, even in carbon dioxide emissions are drastically controlled.[1]  At the World Economic Forum in Davos recently (January 23) the Managing Director the of the IMF, Christine Lagarde, warned "Make no mistake: without concerted action, the very future of our planet is in peril." [2]

Disturb the climate and people will suffer. Typhoon Yolanda that hit the Philippines in October was the largest storm to ever make land and claimed the lives of 6,201 people.  We can measure deaths and injuries in hard numbers, but we cannot measure the misery of homelessness and displacement endured by Yolanda's victims, or the victims of climate change in the most vulnerable countries, most of which are poor. In the past two weeks serious floods have hit six South American countries, with 56 fatalities in Bolivia alone (Feb 17 figures as reported in the Bolivian press.)

Rich countries are being hit too. Australia's weather has been almost biblical: first the blistering heatwave in 2013, followed by droughts and wildfires, and now serious floods in Southern Australia. More than 100 Australian farmers have committed suicide, with rising anxiety levels brought about by growing drought-induced debts apparently playing a role.

In the UK, union firefighters and soldiers are presently assisting with rescuing residents and helping to lay sandbags in deluged villages following weeks of heavy rain and flooding. In a report investigating the recent storms, the UK's Met Office stated, "This was one of, if not the most, exceptional periods for winter rainfall across England and Wales in at least 248 years."[3]  Assistant Chief of the Defense staff, Major General Patrick Sanders, who is coordinating the armed forces response, described the floods as an "almost unparalleled natural crisis". Closer to home, polar vortex' conditions have made Alaska warmer than Georgia, and has contributed to a serious drought in California that is now in its third year.

These extreme weather events are part of a trend. According to the World Meteorological Organization (2007) and the Interamerican Development Bank (2013) global warming is leading to more EWEs worldwide.[4] In October 2013, the Intergovernmental Panel on Climate Change (IPCC) pointed to a changing pattern of extreme weather since 1950, with more heatwaves and downpours in many parts of the world.

As D. Michael Langford, president of the Utility Workers Union of America stated in recent days, "The chaos created by extreme weather has been compounded by the chaos of deregulated energy markets and profit-driven corporations who care little about workers and the interests of the public."  Given this situation, the immediate task  is to make sure that public services are kept at a level that can respond to extreme weather events and thus reduce damage and human suffering. Emissions also need to be reduced steadily and according to a science-based time frame, which means strategic sectors like energy need to be liberated from the dictates of short-term profit-making, chronic underinvestment and neglect, and brought under democratic direction and control.

[3]UK Met Office, "The Recent Storms and Floods in the UK,"