The agreement calls for an immediate 4.5% pay increase as a signing bonus and then across-the-board 3% raises annually through 2016, plus an additional 2% each year for many employees within certain longevity and pay categories, according to UC. The lower-wage workers will not have to pay any increases for some health insurance coverage. 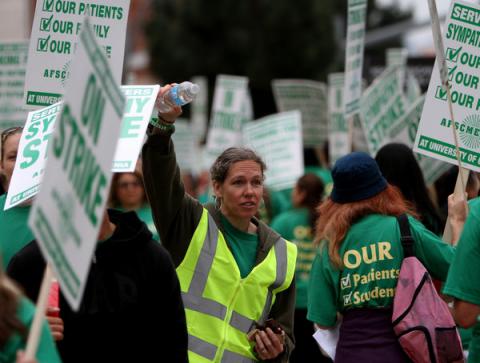 AFSCME 3299 President Kathryn Lybarger led a two-day strike at UC campuses and medical centers in May. The union and UC on Friday announced a contract settlement., Francine Orr
The University of California system and the union that represents 8,300 custodians, food workers, gardeners and other campus service workers have reached a tentative contract agreement, averting what was threatened to be a disruptive five-day strike next week, officials announced Thursday.
The four-year contract agreement between UC and AFSCME 3299 ends the most tense labor situation facing the 10 campuses and five medical centers at the university. Negotiations have dragged on for more than a year. The union held two brief strikes last year and was planning another to start Monday.
"While this proposed settlement includes compromise on both sides, it honors the contributions that career service workers make to this institution, as well as UC’s responsibility to build ladders to the middle class,” AFSCME 3299 President Kathryn Lybarger said in a statement issued Thursday morning. “Our members are deeply grateful to the thousands of students, faculty, colleagues, elected officials, and everyday taxpayers who have stood with us, and stood for the principles of fairness and dignity that bind every member of the UC community.”
Dwaine B. Duckett, UC’s vice president of human resources, also expressed satisfaction that the labor standoff was over. “It is good to have this bargaining wrapped up with a deal on its way to our valued service employees,” he said in a statement. “We worked hard to bridge gaps on the issues. Ultimately both sides chose compromise over conflict.”
The agreement calls for an immediate 4.5% pay increase as a signing bonus and then across-the-board 3% raises annually through 2016, plus an additional 2% each year for many employees within certain longevity and pay categories, according to UC.  The lower-wage workers will not have to pay any increases for some health insurance coverage.
Additionally, the employees will contribute 9% of their pay for pension and retiree healthcare benefits programs, much higher than last year but the same as many other unions, according to officials. Agreements were also reached on what the union described as ensuring safe staffing levels.
In a separate bargaining unit, AFSCME 3299 also represents 13,000 patient care technical employees at the five UC medical centers and its many health clinics.  Those medical workers, such as respiratory therapists, nursing aides and radiology technicians, do not have a contract settlement yet and were scheduled to join the campus service workers in next week’s now-canceled strike. Negotiations with UC are expected to resume Friday.
The AFSCME agreement achieves a major goal for new UC system President Janet Napolitano. Since she took office four months ago, several long-simmering labor disputes have been settled. AFSCME was the most publicly vocal in carrying out noisy demonstrations at the UC regents meetings and in calling for strikes. The union struck for two days in May and held a one-day walkout in November, costing the university millions of dollars in hiring replacement workers and lost revenue.