Media Up to Old Tricks in de Blasio Bashing

Two months in office and the media sours on New York Mayor Bill de Blasio. Why? de Blasio did not anticipate that a Democratic Party Governor of a solid blue state would put cutting taxes for the rich ahead of funding universal pre-K in New York City. 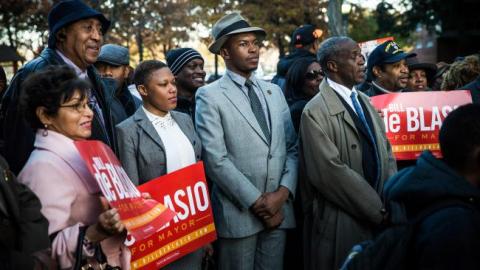 It's predictable: a progressive gets elected, and the traditional media immediately tries to undermine them. In New York City Mayor Bill de Blasio's case, the media is challenging the mayor's ability to fund pre-kindergarten, require rent payments for charter schools, raise the minimum wage, and effectively manage the city.

The results are in, and, according to the traditional media, Bill de Blasio has failed. He's been in office two months and has not implemented his entire campaign agenda. The media now defines de Blasio as a well-meaning, idealistic good doer whose lack of acumen has put him at the mercy of Governor Cuomo and others who know how hardball politics are played.

This silliness accurately reflects New York media coverage of the city's new mayor. And while such nonsense is expected from the New York Post and other conservative media, the narrative of Mayor de Blasio being in over his head is promoted almost daily in the local and national editions of the New York Times.

According to the March 6, 2014 New York Times, de Blasio has already "lost control of his narrative." His first two months in office have "been marked by frustration and disillusion among centrist Democrats who are quick to criticize him, and by anxiety among certain progressives who have seen their worries that he would be a weak manager confirmed."

Which progressives? It doesn't matter. What matters is that de Blasio is already facing criticism from his base.

The hero in the "de Blasio has lost the narrative" storyline is New York Governor Andrew Cuomo. According to the Times, "Mr. de Blasio was unable to anticipate the intensity of Gov. Andrew M. Cuomo's commitment to education reform or to offer his own, more enlightened version."

Or to put it another way, de Blasio did not anticipate that a Democratic Party Governor of a solid blue state would put cutting taxes for the rich ahead of funding universal pre-K in New York City. Instead of bashing Cuomo for ignoring his Party's base and the needs of the voters who put him in office, he becomes a "Realpolitik" alternative to the "naïve" de Blasio.

Nor should de Blasio have anticipated that Cuomo would stand "shoulder to shoulder" in Albany with the charter school industry against the traditional public schools of New York City. The Mayor campaigned on charging rent for "well-resourced" charter schools, and now was seeking to fulfill this pledge.

Cuomo's alignment with de Blasio's opponents on charter schools, like his earlier opposition to the new mayor's funding plan for pre-K, is said to be a political fight where "a centrist accustomed to governing by the art of the possible, is confronting a new challenge in the form of Mr. de Blasio, a staunch liberal who has channeled the impatience of a national left fed up with leaders who trade ideology for compromise."

But the media's framing is wrong. Funding pre-K through tax increases on the rich and charging rent for well-resourced charter schools are both politically possible. Governor Cuomo's lack of support is the problem here, not Bill de Blasio's lack of political realism.

Even normally solid NY Times reporters like Rachel Swarns are promoting the narrative that de Blasio is taking too long to fulfill campaign promises. Her March 10 story, "Among de Blasio's Priorities, Minimum Wage Waits Behind Pre-K," describes low-wage worker Roberto Guzman who was excited about de Blasio's commitment to raise the city's minimum wage. But now this proposal is "on the back burner," halted, like other of de Blasio's initiatives, by the New York legislature's refusal to approve a wage hike.

Once again, Governor Cuomo's responsibility for not actively pushing to help workers like Mr. Guzman is ignored. Republican legislative opposition is also overlooked.

Instead, it is the Mayor who has done the most to put a minimum wage hike on the table that the media then blames for its delay.

Despite media claims that de Blasio's agenda is too bold and that he is having trouble managing New York City, three factors give reason for optimism.

First, Bill de Blasio is a seasoned politician who understands the media's agenda. He will not allow the media to push him off course, or reduce his confidence in his abilities.

Second, de Blasio's core base does not trust the traditional media. It will not be influenced by its critical narrative. Most probably expected the media to undermine a progressive mayor after spending years in glowing praise for billionaire Mayor Bloomberg (whose own failures to get Albany's support for local measures like congestion pricing were blamed on the State Legislature's lack of leadership, not the mayor's).

Third, thanks to the Internet and social media, traditional news outlets are less politically influential today. This is true even for the NY Times on issues like a mayor's performance in which most residents are likely to be making up their own minds.

It's telling that Mr.Guzman in the Swarns' article above says that he "remains hopeful" for a minimum wage hike next year, and that "I think it's going to happen." The city's lower income workers who will benefit from de Blasio's policies are strong supporters of the mayor.

They understand that he, not the media, is looking out for their interests.

[Beyond Chron is published by the San Francisco-based Tenderloin Housing Clinic. Clinic Director Randy Shaw is the paper's editor. Shaw is a longtime San Francisco activist who has published three books on activism, The Activist's Handbook, Reclaiming America, and his new work, Beyond the Fields: Cesar Chavez, the UFW and the Struggle for Justice in the 21st Century. The University of California Press published all three books.
Randy Shaw analyzes how activists should refute false media narratives in his new book, The Activist's Handbook, 2nd ed.: Winning Social Change in the 21st Century.]