The results were overwhelming. With 100 of the 103 precincts where the issue was on the ballot reporting, 87 percent of voters were backing the $15-an-hour wage. Just 13 percent voted against the advisory referendum. That huge level of support will strengthen the hand of activists who are encouraging the city council to consider a major wage hike. 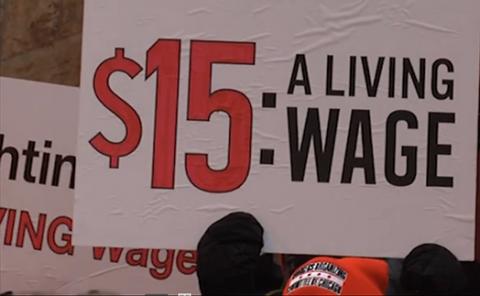 $15.00 an hour IS a Living Wage, medillmoneymavens.com

Political insiders and prognosticators at the national level were, barely a year ago, casting doubts on the question of whether proposing a great big hike in the federal minimum wage was smart politics. While President Obama had proposed a $9-an-hour wage, Senator Tom Harkin, D-Iowa, and Congressman George Miller, D-California, broke the double-digit barrier with a $10.10-an-hour proposal. But there was still skepticism about whether raising wages for the hardest-pressed American workers was a winning issue.

Polls have since confirmed that Americans from across the political and ideological spectrum are overwhelmingly in favor of a substantial increase in the minimum wage. And election results are now confirming the sentiment.

Even as they reelected Governor Chris Christie last fall, New Jersey voters gave landslide support to a measure that not only raised the state minimum wage to $9 an hour but indexed future increases to keep up with inflation. On the same day, voters in Sea-Tac, Washington, approved a $15 hourly wage, while voters in Seattle elected socialist Kshama Sawant on a "Fight for $15" platform.

When voters in the city went to the polls to cast ballots in the Tuesday's statewide and local primary elections, thousands of them faced an economic question: Would they support a $15-an-hour minimum wage for large employers in the city?

The results were overwhelming. With 100 of the 103 precincts where the issue was on the ballot reporting, 87 percent of voters were backing the $15-an-hour wage. Just 13 percent voted against the advisory referendum. That huge level of support will strengthen the hand of activists who are encouraging the city council to consider a major wage hike.

The Chicago vote illustrates a phenomenon that is being seen in many of the nation's largest - and most expensive - urban areas.

has been making the minimum-wage issue central

to his re-election run. Quinn is a Democrat who has a long history of working on issues of concern to low-wage workers and the communities where they live. But he also knows a winning issue.

at his Tuesday night victory rally, "There is a principle as old as the Bible: If you work hard. If you're working 40 hours a week, and if you're doing your job, you should not have to live in poverty. You should get a decent wage. We believe in that and we're going to make it happen."

ripping Republican nominee Bruce Rauner on the issue. A wealthy venture capitalist, who recently quipped that he was not just part of the 1 percent but "probably (the) 0.1 percent," Rauner financed much of his own primary campaign with contributions estimated at $6 million. Yet in the new Quinn ad he is seen proclaiming, "I am adamantly, adamantly against raising the minimum wage."

Rauner, whose GOP primary win was a narrow one, has been all over the place on the wage issue. He said early in the campaign that he would lower the state minimum wage from $8.25 an hour to the national rate of $7.25 an hour. Reports that one of the wealthiest men in the was state promising to cut wages for working Illinoisans did not go over well, and Rauner then suggested he might support raising the state rate if economic conditions were favorable.

Quinn has been far clearer when it comes to discussing wages - saying he favor an increase to at least $10 an hour this year - and the broader issue of economic inequality.

"I believe in everyday people. I think a governor has to have a heart," the governor declared on primary night. "I may not have nine mansions. I have one house. I'm not a billionaire. Never will be. I'm not part of the 1 percent and never will be there. I'm not even part of the 0.1 percent. But I'll tell you this. As long as I'm governor I'm going to fight hard for the 99.9 percent."

[John Nichols writes about politics for The Nation magazine as its Washington correspondent. He is a contributing writer for The Progressive and In These Times and the associate editor of the Capital Times, the daily newspaper in Madison, Wisconsin. His articles have appeared in the New York Times, Chicago Tribune and dozens of other newspapers.

Nichols is a frequent guest on radio and television programs as a commentator on politics and media issues. He was featured in Robert Greenwald's documentary, "Outfoxed," and in the documentaries Joan Sekler's "Unprecedented," Matt Kohn's "Call It Democracy" and Robert Pappas's "Orwell Rolls in his Grave." The keynote speaker at the 2004 Congress of the International Federation of Journalists in Athens, Nichols has been a featured presenter at conventions, conferences and public forums on media issues sponsored by the Federal Communications Commission, the Congressional Progressive Caucus, Consumers International, the Future of Music Coalition, the AFL-CIO, the Rainbow/PUSH Coalition, the Newspaper Guild [CWA] and dozens of other organizations.]

Please support our journalism. Get a digital subscription to The Nation for just $9.50