It is March Madness, after all, when the NCAA makes 90% of its billion-dollar budget. As the business of college football and basketball expands, and as more and more players find themselves used up and spit out with neither compensation nor education to show for their time, this is the moment to talk about the future of the so-called "student-athlete." 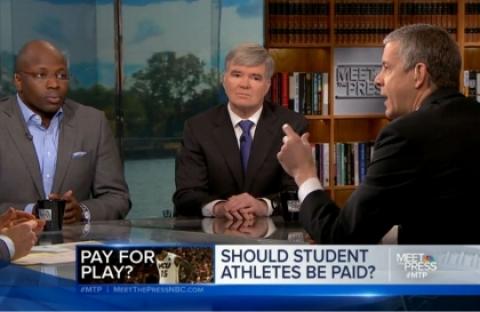 I will say this for the much-maligned David Gregory era of Meet the Press: the weekly program, with the tenacity of a twitter-troll, remains pugnaciously beltway-centric in its perspective. This was seen in Sunday's "debate" about the state of the National Collegiate Athletic Association (NCAA). Their timing was certainly spot-on. It is March Madness, after all, when the NCAA makes 90% of its billion-dollar budget. As the business of college football and basketball expands, and as more and more players find themselves used up and spit out with neither compensation nor education to show for their time, this is the moment to talk about the future of the so-called "student-athlete."

To discuss this issue, Gregory secured three people for the Meet the Press table, including NCAA President Mark Emmert. That's good start! Mark Emmert, is a man who makes a $2 million annual salary defending the status quo. The people Emmert could have been in discussion with is tantalizing. Maybe we would see civil rights author Taylor Branch, whose piece on the NCAA rocked the sports world. Perhaps one of the other guests would be New York Times columnist William Rhoden, whose book $40 Million Slaves examined the social position of African-American athletes. Or we could get USA Today's Christine Brennan, who has written extensively about equity for women in college athletics.

Instead, according to David Gregory's twitter feed, the Meet the Press team wanted to bring in some former jocks. That is a great call! There are numerous ex-college players who have been actively organizing to wrest a degree of justice from the clutches of Mark Emmert. Maybe they booked former All-American Ed O'Bannon, who has led a lawsuit against the NCAA's use of player's likenesses without their permission. Or perhaps they would bring on Ramogi Huma, a onetime UCLA football player who started the National College Players Association. We could hear from a former NCAA athlete who is a woman, like Kate Fagan, who could speak to issues of Title IX and how paying certain athletes could affect others. Or best yet, Northwestern University quarterback Kain Colter, who led his team to actually organize a union. America could hear from the young man who said, "Right now the NCAA is like a dictatorship. No one represents us in negotiations. The only way things are going to change is if players have a union."

No. Instead, Gregory brought in President Barack Obama's personal aide Reggie Love and President Obama's Education Secretary Arne Duncan. Love apparently played basketball and football at Duke, and Duncan hooped it up for Harvard. Forget for a moment that I am a sports junkie and have no memory of the Reggie Love Experience in Durham. Forget that Duncan's Harvard playing days in the 1980s are hardly germane to the very modern issues at play. It speaks to either the poverty of ideas at Meet the Press or their immersion in beltway establishment culture that David Gregory and friends thought, "We need some former NCAA players to take on Mark Emmert. I know! Where are Reggie Love and Arne Duncan?"

Love was unmemorable and Emmert just sat back like he was getting a spa treatment. It took Duncan to give us a couple of lines for the ages. I cannot decide on my favorite "let them eat cake" Duncan-moment. Maybe it was when he said, "This [issue] is very personal for me. I grew up playing in the inner-city on the South Side of Chicago." Inner-city Arne then outlined his plan to punish schools and effectively hollow out their athletic budgets if they did not meet graduation requirements. (This will sound familiar to anyone familiar with Duncan's federal education policies.)

Or it could have been when Duncan called for "middle ground" between Emmert and those calling for athletic compensation. This middle ground for Duncan? "Making sure students are fed, making sure if there's an emergency at home and mom gets very sick or dad passes away, they have an ability to get home to attend the funeral." It's the Arne Duncan "Food n' Funerals Plan" to fix the NCAA.

Yet far more glaring than the content of the discussion was what the discussion was missing. This is not surprising given the parties sitting around the table, but there was zero discussion about how institutionalized racism animates the amassed wealth of the NCAA, the top college coaches and the power conferences. It does not take Cornel West to point out that the revenue producing sports of basketball and football are overwhelmingly populated by African-American athletes. The population of the United States that is most desperate for an escape out of poverty is the population that has gotten the rawest possible deal from an NCAA, which is actively benefiting from this state of affairs. That is why Dr. Harry Edwards called the issue of compensating NCAA athletes "the civil rights movement in sports of our time." That is why Bill Maher uncorked the most viral tweet of his life when he wrote over the weekend, "March Madness is a stirring reminder of what America was founded on: making tons of money off the labor of unpaid black people."

The issue of the NCAA is a racial justice issue. If you don't frame it in that way, if you don't challenge Mark Emmert on the fact that faux-amateurism saps black wealth in the United States, if you don't point out why Taylor Branch, Dr. King's biographer, said the NCAA "has the whiff of the plantation," then you are not having a serious discussion. You are bullshitting. Meet the Press did not give us a serious discussion. Instead you had Mark Emmert, a man on the hot-seat, sitting far too comfortably for our own good.