The Minimum Wage Is a Fight for Women

Despite decades of efforts on behalf of equal pay for women, women still earn on average 77 cents for every dollar a man earns. Legislation increasing the minimum wage to $10.10 would narrow that gap by 5 percent 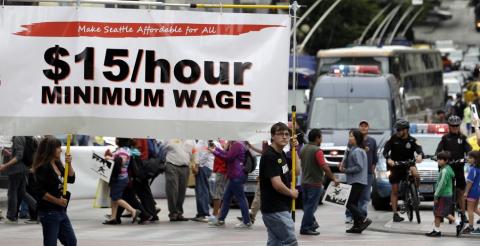 An increase in the minimum wage to $10.10 an hour is especially important for the millions of women who are the backbone of the services sector yet struggle to provide the basics for their families. Plus, it would begin to narrow the earnings gap between men and women, according to a White House report released today.

More than half – 55 percent – of the workers who would benefit from an increase of the minimum wage to $10.10 are women, the report said. That is because women are disproportionately concentrated in low-wage service sectors of the economy.

More than 2 million of the women who would benefit are single mothers, and if they are raising two children while working full-time at a job paying the federal minimum wage of $7.25 an hour, they are below the poverty line of $15,730 for a family of three.

Included among those who would benefit are those in the tipped-wage sector, which is 72 percent comprised of women. These include restaurant workers and those in other occupations where workers rely on tips. That’s because the tipped minimum wage – $2.13 an hour – has not been increased since the 1990s, and legislation that would set the $10.10 minimum wage would also set this tipped minimum to 70 percent of the minimum wage. Both would then be indexed to inflation.

Despite decades of efforts on behalf of equal pay for women, women still earn on average 77 cents for every dollar a man earns. Legislation increasing the minimum wage to $10.10 would narrow that gap by 5 percent, the report said, citing analysis from the President’s Council of Economic Advisers.

The report also argues that the $10.10 minimum wage “can also be a powerful tool in helping women work their way out of poverty and into the middle class.” The report notes that as the buying power of the minimum wage has failed to keep up with the cost of living since the 1980s, the income gap has widened between women at the bottom of the wage scale and those at the median.

This report comes as congressional Republicans continue to stall on bills in both houses that would implement the wage increase. In particular, the House bill, by Rep. George Miller (D-Calif.), has yet to even come up for a hearing before the House Education and Labor Committee.

Hours after the report was released, several dozen female low-wage workers and their families braved a cold, windy Washington afternoon to tell Congress that the least they can do is pass legislation that would raise the minimum wage to $10.10 an hour. (The march is featured in the video above.)

In fact, several of the demonstrators said that the government should go even farther and called for a “living wage” of $12.50 or more – the minimum wage that a single parent would need to rent a basic apartment and pay for necessities in a high-cost city like Washington.

The march from Union Station to the U.S. Capitol was organized by the group One D.C. and the Service Employees International Union.

Almost 70 percent of the public supports the $10.10 minimum wage, but House Republicans are still not hearing the voices of the majority. For that to change, we will have to be persistent. Join the more than 60,000 people who have signed our petition to raise the minimum wage.