Output growth at the nation’s factories has [...] been weak since 2000. And though automation undoubtedly has displaced some workers in manufacturing, research suggests that persistent trade deficits and America’s decline as a location for production have accounted for much of the sector’s job loss. Boosting exports or reducing imports enough to bring trade into balance would generate 4.2 million jobs directly and another 2.1 million jobs indirectly. 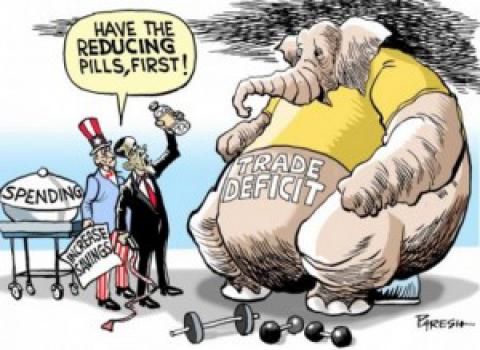 Though job growth over the past six months has averaged about 175,000 new jobs per month, economists agree that number isn’t where it should be. Full employment, in which nearly everyone willing and able to work has the chance to do so, remains elusive.

Yet, to achieve that goal, few economists see a significant role for manufacturing, which historically has powered job growth during economic recoveries. Although manufacturing has shed 30 percent of its jobs since 2000, output growth at the nation’s factories exceeded economic growth overall except during recessions. Many economists have, thus, concluded that American manufacturing is strong and job losses in the sector are largely due to labor-saving technology. Such conventional wisdom also has kept economists from pursuing policies to boost manufacturing jobs.

This view, however, reflects a fundamental misunderstanding about what manufacturing statistics measure and mean. For arcane technical reasons, domestically manufactured computers and semiconductors account for virtually all real output growth in the sector. Output growth at the nation’s factories has otherwise been weak since 2000. And though automation undoubtedly has displaced some workers in manufacturing, research suggests that persistent trade deficits and America’s decline as a location for production have accounted for much of the sector’s job loss.

Recognizing that the United States has lost competitiveness as a location for production and that globalization and international trade are largely responsible for the steep loss of manufacturing jobs is an essential first step for fashioning appropriate policy responses.

Addressing the trade deficit is an important starting point. The current 2013 level of $500 billion means that a large amount of demand is directed outside of the United States rather than at home, where it could create jobs.

The trade deficit gets little attention in today’s discussion about economic growth. Many incorrectly assume that the United States has a long history of running large trade deficits. The trade deficit actually was relatively small through most of the 1990s. Following the East Asian financial crisis, countries throughout the developing world deliberately depressed their currencies against the dollar to accumulate foreign reserves, causing our trade deficit to soar.

The dollar’s value relative to foreign currencies is a major factor influencing the trade deficit. The challenge is that losses in some industries might not be recovered when the dollar falls back to its earlier level. Manufacturing operations have become more sophisticated and critical supply networks have developed in emerging economies. The dollar would have to fall well below its original value in order for some manufacturers to find it profitable to bring back or expand production in the United States, underscoring the cost of a prolonged period in which the dollar is overvalued. Taking immediate steps to lower the value of the dollar is essential to making the United States a competitive location for producers and bringing the trade deficit down.

The most likely way that the dollar will fall in value is by negotiating agreements with the countries that have deliberately propped up the dollar against their own currencies. But, while a lower-valued dollar is important to workers and many domestic businesses, it won’t be popular with certain powerful interest groups that benefit from an overvalued dollar. In other words, a major obstacle to lowering the value of the dollar is political.

It’s time we consider the long-term benefits of reducing our trade deficit and creating a resurgence of manufacturing jobs — a move that will not only help return the country to full employment and close the gap in income inequality but also promote the global competitiveness of American workers.

Susan Houseman is senior economist at the W.E. Upjohn Institute for Employment Research and Dean Baker is co-founder of the Center for Economic and Policy Research. Both are participating in the Center on Budget and Policy Priorities’ national dialogue on full employment at the National Press Club in Washington, D.C.