`State of Black America': Dismal and Getting Worse

The dramatic and widening gap in household wealth along racial lines in the United States reflects policies and institutional practices that create different opportunities for whites and African-Americans. Personal ambition and behavioral choices are but a small part of the equation. 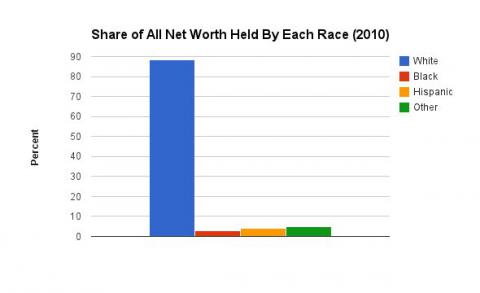 WASHINGTON – (NNPA) – The wealth gap between African-Americans and whites has expanded in recent years and is not likely to narrow without significant reductions in Black unemployment and changes in a system that favors the wealthy over poor and middle class Americans.

That’s according to the National Urban League’s 38th annual State of Black America report titled, “One Nation Underemployed: Jobs Rebuild America,” scheduled that was released Thursday at a news conference at the National Press Club.

In a statement accompanying the report, Marc H. Morial, president and CEO of the National Urban League, said: “The 2014 State of Black America and corresponding Equality Index indicate that while each state and city has its own economic recovery story to tell, the consistent refrain is that there is an urgent and growing disparity between the few who are reaping the rewards of economic recovery and the majority who are still reeling from aftershocks of the Great Recession.”

Morial added, “While ‘too big to fail’ corporations went into the bail-out emergency room and recovered to break earnings and stock market records, most Americans have been left in ICU with multiple diagnoses of unemployment, underemployment, home losses and foreclosures, low or no savings and retirement accounts, credit denials, and cuts in education and school funding.

“We must work to restore the very essence of 20th century America — the possibility of upward mobility for all — with a focus on meaningful solutions to these pressing challenges, including job creation and training, and ensuring that Americans are paid livable wages for the work they do.”

The 2014 Equality Index is a yardstick used to measure how well African-Americans are doing relative to whites. In computing the Equality Index, 30 percent of the final score is based on economics while health and education each gets 25 percent and social justice and civic engagement each receives 10 percent on a 100 percent scale.

Explaining the Equality Index, the authors say: “That means rather than having a whole pie (100 percent), which would mean full equality with whites in 2014, African-Americans [with an index of 71.2 percent] are missing about 29 percent of the pie.”

In other words, the larger the Equality Index, the closer Blacks are to reaching parity with whites.

The Equality Index has declined from 73 percent in 2006, to 72.1 percent in 2010 to 71.2 percent in 2014. However, scholars caution that the overall figure might reflect progress in some areas and retrenchment in others.

• The poverty index for Blacks compared to whites is 29 percent — 28.1 percent of Blacks live in poverty vs. 11 percent of whites.

• Black-White unemployment equality is 50 percent or 2:1.

In a chapter titled, “Policies of Exclusion Perpetuate the Racial Wealth Gap,” Thomas M. Shapiro wrote: “The dramatic and widening gap in household wealth along racial lines in the United States reflects policies and institutional practices that create different opportunities for whites and African-Americans. Personal ambition and behavioral choices are but a small part of the equation.”

Shapiro wrote, “In gross terms, the difference in median wealth between America’s white and African-American households has grown stunningly large.

According to Shapiro, home ownership accounts for 27 percent of the growth in the racial wealth gap. He said reasons home equity rises dramatically faster for whites include:

• White families buy homes and start acquiring equity eight years earlier than Black families because they are more likely to receive family assistance or an inheritance for down payments.

• The home ownership rate for white families is 28 percent higher than rates for Blacks.

“Hard evidence shows in stark terms that it is not just the last recession and implosion of the housing market that contributed to the widening racial wealth disparities,” Shapiro wrote. “Past policies of exclusion, such as discriminatory mortgage lending, which continues today, ensure that certain groups reap a greater share of what America has to offer while others are left out.”

No one expects the wealth gap to narrow without some reduction in unemployment.

“More than one-third of unemployed workers have been out of work for six months or longer and one in four has been jobless for a year or longer,” Valerie Rawlston Wilson, an economist in the National Urban League’s Washington bureau, noted in her introduction to the report.

She explained, “If we factored in the number of people who want and are available for work (but are not actively looking for a job) along with the number of unemployed workers actively looking for a job, and those who are working part-time out of necessity (but would prefer full-time work), the actual rate of underemployment was 13.1 percent at the end of 2013, nearly double the official unemployment rate.”

And things are even worse for African-Americans, Wilson said.

“For African-Americans, these challenges are even greater,” she wrote. “Though the Black unemployment rate briefly and narrowly dipped below 12 percent for the first time since 2008 at the end of last year, 42 percent of Black unemployed workers are long-term unemployed and 28 percent have been jobless for at least a year.

The rate of underemployment for African-Americans was 20.5 percent, compared to 11.8 percent for white workers and 18.4 percent for Hispanic workers.”

For the first time, the State of Black America provides an Equality Index for 77 major metropolitan areas. The report provided charts for Black-white income equality and unemployment equality.

Summarizing the discussion on income inequality, Morial said, “An Oxfam report released in January confirmed what the Urban League Movement has posited for the last few years: in the U.S., where the gap between rich and poor has grown at a faster rate than any other developed country, the richest one percent of Americans have received 95 percent of the wealth created since 2009 — after the economic crisis — while the bottom 90 percent of Americans have become poorer.”

Morial explained, “When we overlay that with the disproportionate impact of unemployment on African-Americans and other people of color, as well as the impact of the twin terrors of racial income and wealth gaps, we see an even direr situation.”