Homeless Lose a Longtime Last Resort: Living in a Car

Cities in Silicon Valley, Elsewhere Crack Down on Vehicle Dwellers Driven Out of Apartments by Rents 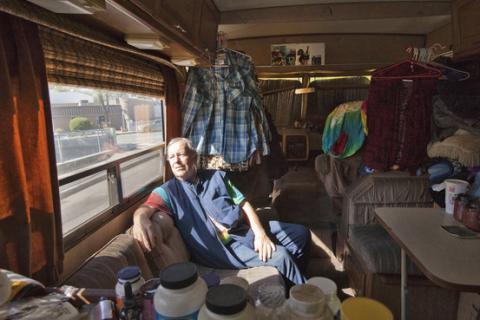 Fred Smith, in his motor home last month in Palo Alto, Calif., found himself unable to afford his apartment after losing his software-engineering job. , Kike Arnal for The Wall Street Journal

PALO ALTO, Calif.—In the three decades he worked as a software engineer in Silicon Valley, Fred Smith never imagined he would spend his golden years homeless.

But three years ago, Mr. Smith could no longer afford an apartment here, so he moved into an aging Winnebago camper. The 70-year-old showers at a gym where he has had a longtime membership. For most meals, he eats $1.20 orders of eggs or fish patties at McDonald's.

As housing costs here have skyrocketed with the latest technology boom, Mr. Smith has found himself among thousands of people in Silicon Valley struggling to afford a place to live.

The San Jose/Santa Clara County region's homeless population—about 7,600 on any given night, the fifth-highest among major metro areas—edged up in 2013, even as the number of homeless nationwide dropped, according to U.S. data. About 46% of the homeless here are living on the streets for the first time, while 48% previously rented or owned a home, according to a county survey.

At the same time, Silicon Valley incomes, rents and home prices have soared. In Palo Alto, home of Tesla Motors, TSLA +0.68% Hewlett-Packard HPQ +0.83% and Stanford University, average rents increased 34% during the past five years to $2,881, more than 2½ times the national average, according to apartment market-research firmRealFacts LLC. Silicon Valley's median household income is on the rise at $90,000, 75% above the national figure, according to the U.S. Census Bureau.

For months now, Mr. Smith has feared he might lose his current home, which is stationed on a street near a quiet Palo Alto park. An ordinance passed by Palo Alto last year would punish people cited for living in a vehicle with as much as a $1,000 fine or six months in jail.

"You're at risk of losing everything," Mr. Smith said recently. "It's a weird feeling that until you've lived this way, you don't realize what it's like."

For the moment, the city has delayed enforcing the ban while the Ninth U.S. Circuit Court of Appeals considers a challenge to a similar law in Los Angeles. A decision is expected in the next few months and could affect similar laws in cities including nearby San Jose and Santa Clara. At least 70 cities across the nation have laws targeting people who live in their vehicles.

Officials say these bans aim to prevent nuisances that can be created by those living in cars, and most are enforced only on a complaint basis.

In Palo Alto, police received dozens of complaints from residents near a community center where car dwellers were using the restrooms.

"The neighbors in the community, I think, wanted to be reasonable, but they didn't feel safe having their kids go to the center," said Claudia Keith, a spokeswoman for the city.

There are 15 emergency shelter beds and about 150 homeless people in Palo Alto. A nonprofit center provides assistance and referrals. The city also has pledged $250,000 to address homeless issues.

"While, yes, Palo Alto is a city with a lot of wealth, there is still a population with a lot of needs, and I think generally the community is grappling with how do we help the unhoused," said Ms. Keith.

James Brooks, director of city solutions at the National League of Cities, said that many cities are grappling with the issue and "trying to balance the needs of the homeless and the needs of the community."

Homeless advocates say cities should do more to aid homeless people, rather than prosecute them. Maria Foscarinis, executive director of the National Law Center on Homelessness and Poverty, said that as homelessness increased during the recession, there has been a boost in "laws that criminalize it," such as bans on camping in public places and restrictions on sitting and lying on sidewalks.

"With the dearth of affordable housing for folks, sometime they have no other option," said Mr. Dolci. He said that with a low vacancy rate and rising rents, landlords aren't necessarily eager to rent to people with spotty employment and credit or limited government housing subsidies.

Temporary housing isn't easy to find either, with just 26% of the area's homeless in shelters any given night, the third-lowest percentage among major metro areas, according to a 2013 report by the U.S. Department of Housing and Urban Development.

Karae Lisle, who heads the InnVision Shelter Network, a nonprofit that runs shelters in the area, said that people like Mr. Smith who had successful tech careers are a "small percentage, but certainly a sector that we have." She said they are representative of how many people who had jobs and homes ended up on the streets here.

Homelessness is "kind of a hidden side of Silicon Valley, where there's so much money," said Eric Brewer, 49, a tech entrepreneur and former colleague of Mr. Smith's at Ramtek Corp. who is trying to help him. "You have people that are very brilliant that can end up in desperate situations."

Unable to find a job, he soon went through his meager savings. By 2010, with his only income a $1,700 monthly Social Security check, Mr. Smith could no longer afford his $2,150-a-month rental apartment. When he couldn't find another rental, he moved into the RV.

He signed up for affordable housing but remains on a waiting list years later. He turned down an offer from his brother to move to Illinois. He wants to stay in Palo Alto, he says, because it has been his home for so long and because he feels safe here.

When Kelly Smith, Mr. Smith's 34-year-old stepson, found out that he was homeless, he was not surprised.

"He didn't know how to take care of money," said the younger Mr. Smith, who lives in Maryland. The two do not keep in regular contact outside of occasional Facebook FB +7.25% messages.

He said that after his mother died, he wondered why Mr. Smith continued to live in such an expensive area. He characterized his stepfather as a bit of "an eccentric."

The elder Mr. Smith disagreed with his stepson on the issue of money-management although he said that wished that he had saved more. He said he stayed in Palo Alto in large part because of the memories of his late wife.

Like Mr. Smith, retirees Suzan and James Russaw could no longer afford the rising rents here on Social Security income after they lost their $800-a-month apartment in 2012. They moved into their Ford Explorer, seeing it as a temporary situation. Mr. Russaw died earlier this year at age 85 and Ms. Russaw, 68, is still looking for housing.

"I thought it would just take a couple of months," she said. "You know, they say pull yourself up by your bootstraps, but in Palo Alto—and the Bay Area—it's very difficult to do, because the cost of living is so outrageously high."

Mr. Smith calls the city's vehicle-dwelling ban "cruel." He suggests that Palo Alto designate areas for overnight parking for people like him trying to get back on their feet.

To that end, Mr. Smith is working to teach himself new skills, like how to build smartphone apps.

Meanwhile, he hopes reconnecting with his old colleague, Mr. Brewer, may lead to some work.

"With a lot of the homeless people, there's some mental issues going on, and then there are people like Fred," said Mr. Brewer. "It's just a bad set of circumstances—anyone could be in his shoes."

Write to Zusha Elinson at zusha.elinson@wsj.com