As fewer people remain able to afford rent in big cities, more leave those cities for cheaper regions, or simply fall out of the housing market and into homelessness. Think tanks and activist groups are thinking outside the box with solutions. 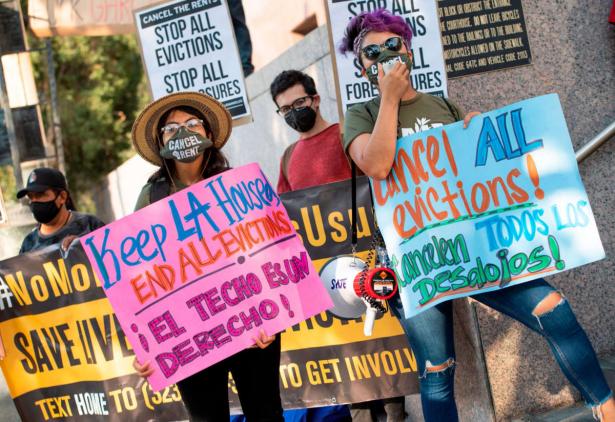 Renters and housing advocates attend a protest to cancel rent and avoid evictions in front of the court house amid the COVID-19 pandemic on August 21, 2020, in Los Angeles, California., Valerie Macon/AFP via Getty Images

In the aftermath of the 2008 housing market collapse, I spent many months reporting on the “collateral damage” caused by a systemic failure. I remember going into campgrounds in California’s Central Valley, where homeless people crowded in the communal bathrooms, prepping for work. I remember huge homeless encampments alongside railway tracks and dotting the sides of freeway embankments.

I also remember going into towns like Stockton and Las Vegas and seeing entire neighborhoods suddenly vacant, the original owners and tenants foreclosed on or evicted. Empty houses had been stripped of their copper wiring by scavengers. Swimming pools, in some abandoned homes, had been taken over by wildlife. It looked post-apocalyptic.

In other neighborhoods, I saw unemployed people selling off their life possessions in yard sales — not to raise petty cash for holidays or kids’ school trips, but in a frantic effort to raise enough to cover the next month’s rent or mortgage. As the real estate market imploded, half-developed suburban tracts and malls were left as ghostly reminders of what could have been. I remember street signs poking out from overgrown grass, in one tract that had been carefully divided into streets and avenues, but in which the houses had never actually been built. When the recession hit, they became signs to nowhere, mementoes of a boom that had bellied up.

None of that damage was ever really fully dealt with: California’s freeway embankments, riverfronts, city centers and railway tracks are still home to tens of thousands of houseless people. And the phenomenon isn’t limited to the West Coast. For, while California’s homelessness crisis is particularly visible, this is a human catastrophe that affects people nationwide. Many of those who lost their savings and their assets in that last recession have never fully regained income stability or housing security.

Now, 12 years after that collapse, a second, far bigger economic implosion, triggered by the coronavirus pandemic, is layering itself upon the earlier housing crisis. The numbers are extraordinary, hinting at a ballooning homelessness crisis redolent of the Great Depression, and, at the same time, a deepening structural challenge to the economy. Combined, these crises could weaken not only the housing market but also the banking system — much as the housing crisis of 2007-08 ultimately morphed into a bank-busting fiasco that risked putting a match to the viability of the entire economy.

An analysis of U.S. Census Bureau data found that in 29 states, at least 40 percent of households that rent their homes are at risk of eviction. In Mississippi, that number rose to a stunning 58 percent. In New York, it was 45 percent; in California, 42 percent. Some of these renters are already behind on rent; others likely will be now that the increased weekly unemployment insurance payments passed by Congress in March are being whittled back down again. In smaller states, that translates to a shortfall in rent of several hundred million dollars per month; in larger states, the shortfall rises into the billions.

In 29 states, at least 40 percent of households that rent their homes are at risk of eviction.

As fewer people remain able to afford rent in big cities, more leave those cities for cheaper regions, or simply fall out of the housing market and into homelessness.

The Federal Home Loan Mortgage Corporation, better known as Freddie Mac, recently released a report detailing higher-than-normal vacancy rates in multifamily units in many cities, especially throughout the Sunbelt, as the economic toll of the pandemic intensifies. Because of this, the report also detailed how fewer large housing units would be built in the coming years, thus further undermining the long-term stability of rental markets.

In San Francisco, the median rental price for a one-bedroom has dropped nearly 12 percent in the last few months. In New York, Manhattan median rents are down nearly 5 percent, and vacancy rates are at their highest level since the early 2000s.

Now, lower rental prices aren’t necessarily a bad thing — in fact, so long as those who remain can pay the lower rents, they could be a necessary corrective to a market that, in cities such as San Francisco, has been over-inflated for years. But, as the economic crisis worsens, there’s a real risk that even these lower prices won’t be affordable to San Franciscans and New Yorkers, to Chicagoans and Los Angelenos, and residents of other cities. There is a risk that, absent coherent and coordinated policy interventions, U.S. metropolises will enter a destructive downward spiral in which widespread loss of income leads to waves of evictions and empty properties, which then often lead to foreclosures as landlords can’t pay their mortgages. Foreclosures can in turn lead to collapses in urban infrastructure, triggering a broader exodus from the cities and more downward pressures on real estate and on urban tax bases.

After plummeting earlier this year due to the web of moratoriums put in place by states and by Congress, foreclosures have also begun creeping up this summer. And, absent legislation or executive actions to protect homeowners, mortgage service analysts now predict huge increases in foreclosures over the coming year, especially in high-cost-of-living states.

In some scenarios, foreclosure filings could triple throughout much of the West and double in the Northeast. At the same time, the number of home sales is also falling, affecting the high numbers of workers employed in the real estate sector in states like California.

The U.S. banking system is already exposed to loans given out to “troubled” businesses and then repackaged, mixed in with other debt, and sold on the secondary market. This secondary market, as The Atlantic recently reported, looks strikingly similar to the bundled junk mortgages that were traded among banks and other investors in the early years of the century and that brought the financial system to its knees in 2008. Layer onto that a mortgage crisis, and parts of the banking system start to look awfully shaky.

A Congressional Research Service report from June found that nearly 400 banks around the country had more than 50 percent of their total assets in the form of household loans. If a wave of mortgage payment defaults begins to crest over the coming year, and a significant percentage of those loans aren’t repaid, the risk of bank failures grows.

Cities and states have tried to extend eviction moratoriums on a piecemeal basis. A “moratorium,” while better than nothing, is not the same as “debt forgiveness” or a true rental subsidy; it merely delays the date at which renters have to pay back the rent that they owe, and it also leaves the owners of the properties, many of whom are reliant on monthly rental payments from their tenants, at risk of defaulting on their mortgages. Over the last few months, Congress and the Trump administration have also, in fits and starts, made efforts to federalize the response since the pandemic took root.

But, like so much else in the world of D.C. politics, the inability of the parties to come together on this, and the continual sabotage of smart public policy approaches to this crisis by the Trump administration, have rendered this response largely toothless, and thus left both the mortgage and the rental markets vulnerable to sudden shocks as the months of pandemic-related economic disruption continue.

Earlier in the crisis, all but eight states had eviction moratoriums in place. Today, only about a dozen do — and even though this list includes large states, such as California and New York, it still leaves roughly half the country’s population with no genuine protections against evictions that follow as a result of pandemic-created economic hardship.

Federally, the CARES Act, passed in March, did include an eviction and foreclosure moratorium; but, like most of the state efforts on this, it, too, has expired. The HEROES Act, passed by the House, would extend that moratorium until next March, but Mitch McConnell’s Senate has shown no interest in passing it. And Trump’s recently issued executive memoranda on evictions merely advise federal agencies to not facilitate evictions, rather than setting in place real, ongoing, economic assistance to struggling families. At most, these memoranda, little more than political stage-props, will delay the problem of mass evictions beyond the election; what they won’t do is truly rescue struggling renters from their economic insecurity.

Held hostage to political posturing, millions who have lost their wages or their businesses are now being pushed ever closer to the housing abyss. U.S. Census Bureau data show one in five renters are already behind on their rent. Over the coming months, those numbers will almost certainly soar. According to data generated by the Center for American Progress, the housing crisis is disproportionately impacting nonwhite families. In Florida and other states, local housing activists have already chronicled a vast increase in eviction filings against renters of color.

Around the country, think tanks and activist groups are thinking outside the box to try to tackle this growing crisis. The Urban Institute has pushed for federal properties and hotels to be opened up to house the growing number of homeless Americans. The Brookings Institute has suggested that local and federal level governments step in to directly cover rent payments for low-income families during the pandemic. Housing activists have pushed “rent cancellation” proposals. In California, state politicians are debating a multibillion-dollar measure that would give renters 10 years to pay back the rent they are behind on, with the state taking on the risk by giving landlords short-term tax breaks that equal out to the amount of outstanding rent the tenants owe.

With big and bold policies, the worst can still be avoided in housing and rental markets. Those policies, however, must be embraced not just by a few states and localities, but by every level of government in the country. Absent that, the country risks a 2008-style housing catastrophe on top of the public health and employment catastrophes that have already brought the U.S. to its knees.

This is the 4th month in a row where we’ve fallen short.

Will you help make sure we reach future fundraising goals by making a small recurring donation today? Most of our monthly donations are in the $5 to $10 range but any amount helps.

When you make a monthly donation you help us strengthen Truthout and plan for the future.

Please, do what you can.