Since April 14, 40,000 workers at the Yue Yuen Shoe Factories in Dongguan, Guangdong Provinece have been on strike. They make shoes and sneakers for Salomen, Nike, Asics, Car,and Adidas. Adidas has already begun moving production to another sweatshop. 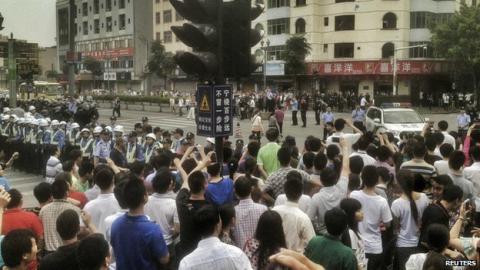 Workers are striking for increased social benefits and overtime payments,Reuters

One of the world's largest group of shoe factories in southern China has gone quiet.

In a strike that has dragged on for more than two weeks, more than 40,000 workers at the Yue Yuen shoe factories located in Dongguan, Guangdong province, are refusing to report to work.

"We are just sitting or standing in or outside the factories, chatting to each other," explains Mr Luo, one of the striking workers who did not want to be identified by his full name.

Hundreds of police are close by.

"The ones who shout slogans get taken away. We don't even dare to think about banners," Mr Luo adds. 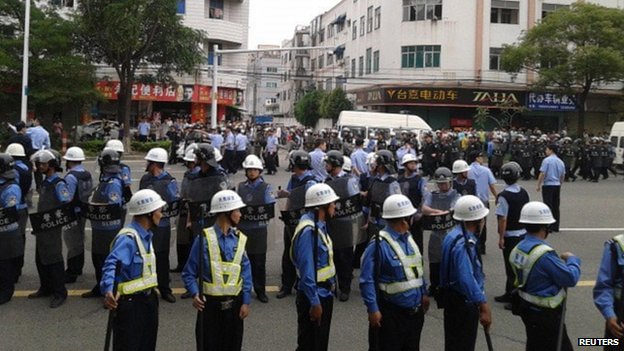 Two activists working for Chunfeng, a labour dispute service, had been helping the workers to organise themselves, Mr Luo explained.

But on Thursday, the activists were detained by the police. One of the men, Zhang Zhiru, was released a day later. He confirmed to the BBC that he was alright, but he was reluctant to discuss his ordeal. Mr Zhang's colleague, Lin Dong, is still believed to be in police custody.

Nonetheless, Zhang Zhiru has vowed to continue helping the workers.

In an open letter released on a colleague's microblog account, Mr Zhang wrote that "Chunfeng will continue its commitment and dream. The organisation will try its best to provide service and assistance… no matter what kind of pressure it is under or what kind of difficulties it will encounter

Mr Luo, the striking worker, is relieved the activists will continue to offer advice.

"Chunfeng helped us unify our demands," he told the BBC.

"They suggested we choose some representatives. Then we should get help from professors and experts and negotiate with the factory. I think this is the right way. I have never met them but they were helping us through online group chats."

Yue Yuen appears to be open to negotiation. Last week, the company offered to begin paying full social security benefits by 2015, but it has now offered to pay workers those benefits starting next month. However, the two sides have yet to reach a deal.

The stakes are rising for the shoe manufacturer, as some of its major clients consider shifting production elsewhere. Adidas, the company's largest customer, has already moved some of its business to other nearby Chinese factories.

As the work stoppage continues, Mr Luo says that tensions are rising in Dongguan.

"We are still on strike but some team leaders tried to force us to work. One worker was beaten. Others were threatened and told they will lose their job if they don't go back."

But he is certain the strike will have long-term effects, no matter what the two sides decide.

"No matter if we will succeed or not, it will be recorded in history. It will be effective in improving workers working conditions and social benefits in the future."

New York – In an official document released by the Dongguan City Union and obtained by China Labor Watch (CLW), the union laid out its responses to the demands of Yue Yuen shoe factory workers, most of whom have been on strike since April 14. According to this document, the union supports the election of worker representatives and negotiation between the Yue Yuen workers and management.

The union's public support for workers is an important first step in protecting Yue Yuen workers' rights, and CLW hopes that the union can carry out the representative elections as soon as possible. CLW calls on Yue Yuen to participate in collective negotiation with its workers.

This official response, requiring that factories provide backpay to workers for past social insurance, creates an important precedent. Unpaid social insurance is a pervasive issue in most Chinese factories, including suppliers to major international brand companies.

CLW's Executive Director Li Qiang said, “Although it did not meet Yue Yuen workers' expectations, this official document explains that according to law, a factory must reimburse social insurance as long as workers demand it. This rule is applicable to all companies that have not fully paid workers' social insurance.”

Despite the positive replies from both the union and government officials, it remains to be seen if these measures are fully implemented.

On the last page of the document, Yue Yuen management expressed that if workers did not return to work, the company reserved the right to fire workers for three days' absence from work, effectively forcing workers to return to their jobs.

Despite the Dongguan union's response to Yue Yuen's employees, workers have continued to strike on Thursday.

All workers in Yue Yuen's Old Number Three Facility (老三厂) are on strike. With about 15,000 workers, this facility primarily manufacturers products for Nike. Most workers swiped their time cards and then left the factory in protest.

In other facilities, some workers have returned to worker while others continue to carry out a work stoppage on their production lines. Because some facilities have locked the doors and restrict workers from leaving after they clock in, it is difficult for workers to accurately estimate how many people located in the production facilities are still participating in the work stoppage.

One worker on the Asics production line said, “The strike has continued. Management is being too forceful about workers returning to work, saying that beginning on the 24th, if workers swipe their cards and then leave, they will be punished according to absenteeism rules. Worker can only carry out a work stoppage sitting at their positions in the facilities in order to protest and demand a reasonable response from management to workers' demands.”

Workers making Adidas products said that some Adidas orders had been transferred to Fujian Province while others have been sent to Qingyuan in Guangdong Province. Adidas has stated that it has in fact transferred some of its orders but did not clarify the new location of production.

Workers told CLW that the Yue Yuen factory currently has orders for brand companies that include Salomen, Nike, Asics, Car, Adidas, and more.

CLW reported recently on the detainment of two labor activists, Zhang Zhiru and Lin Dong, who had assisted Yue Yuen workers during the strike. On April 23, Zhang Zhiru called his wife, explaining that he would return home in a few days.

Founded in 2000, China Labor Watch is an independent not-for-profit organization. For more than a decade, CLW has collaborated with labor organizations and the media to conduct a series of in-depth assessments of factories in China that produce toys, bikes, shoes, furniture, clothing, and electronics for some of the world’s largest companies. CLW’s New York office creates reports from these investigations, educates the international community on supply chain labor issues, and pressures corporations to improve conditions for workers.