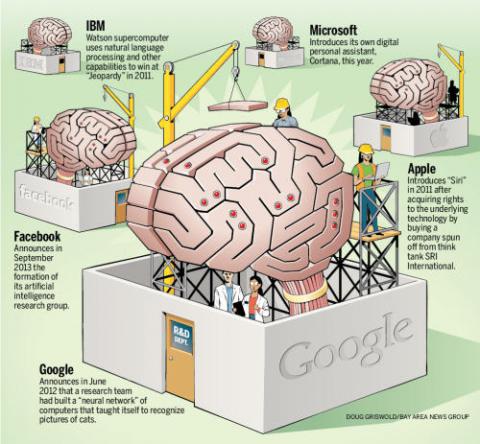 The latest Silicon Valley arms race is a contest to build the best artificial brains. Facebook, Google and other leading tech companies are jockeying to hire top scientists in the field of artificial intelligence, while spending heavily on a quest to make computers think more like people.

They're not building humanoid robots -- not yet, anyway. But a number of tech giants and startups are trying to build computer systems that understand what you want, perhaps before you knew you wanted it.

Artificial intelligence programs can already recognize images and translate human speech. Tech researchers want to build systems that can match the human brain's ability to handle more complex challenges -- to intuitively predict traffic conditions while steering automated cars or drones, for example, or to grasp the intent of written texts and spoken messages, so they can better anticipate what kind of information, including ads, their users want to see.

Silicon Valley Turns to an Algorithm to Fix its Diversity Problem

In Silicon Valley, the algorithm is seen as a magic bullet that can fix almost anything. Now one company is banking on an algorithm to fix the industry's dearth of women and minorities in tech.

The algorithm is trying to tackle a very real problem in the tech world. Unfortunately, the algorithm does nothing about the social issues behind the hiring imbalances. Silicon Valley's discrimination problems run too deep. Silicon Valley often turns to technology to fix the world's problems. Issues like poverty, discrimination, education, and politics have proven too complicated for something as cut and dry as an algorithm.

[Note:  This is a long but provocative discussion first published in German - Portside Moderator.]

We are as frogs in the digital waters, and Springer CEO Mathias Dopfner has just become our frog town crier.  Mr. Dopfner's "Why We Fear Google" (a response to Google Executive Chairman Eric Schmidt's open letter, "A Chance for Growth") warns of danger on the move: "The temperatures are rising fast."  If his cry of alarm scares you, that's good. Why? There is a dawning awareness that Google is forging a new kingdom on the strength of a different kind of power -- ubiquitous, hidden, and unaccountable. If successful, the dominion of this kingdom will exceed anything the world has known.

Because accessing the Web and the wider Internet have become essential for effective social participation across much of the world, we rely on Google's tools as we search, learn, connect, communicate, and transact. The chilling irony is that we've become dependent on the Internet to enhance our lives, but the very tools we use there threaten to remake society in ways that we do not understand and have not chosen. If there is a single word to describe Google, it is "absolute." Mr. Schmidt's open letter to Europe shows evidence of such absolutism. Democratic oversight is characterized as "heavy-handed regulation."  The "Internet", "Web",  and "Google" are referenced interchangeably, as if Goggle's interests stand for the entire Web and Internet.  Schmidt warns that were the E.U. to oppose Google's practices, Europe risks becoming "an innovation desert."  Just the opposite is more likely true.

Massachusetts Institute of Technology (MIT) will be giving away $100 worth of Bitcoin to every undergraduate on campus this autumn in an attempt to turn the university into a leading cryptocurrency research centre.

Half a million dollars has been raised for the project, covering the distribution of Bitcoin to each of MIT's 4,528 undergraduate students. It is hoped that the giveaway will reinvigorate the controversial digital currency and establish an 'ecosystem' for Bitcoin at MIT.

It's up to recipients to choose how to spend their Bitcoins, and researchers will be monitoring their effect on academic and entrepreneurial activities at the university. Bitcoin is a digital currency which facilitates payments in units called Bitcoins - currently valued at around $440 each - over a peer to peer network.

Hell No, We Won't Go: No Fake Net Neutrality for Racial Justice Advocates

As the Federal Communications Commission considers Comcast's bid to control the lion's share of the Internet and cable market, the Wall Street Journal reports that the regulatory agency intends to propose rules that will allow Internet companies to discriminate online. The consequences for Internet users of color and racial justice content providers couldn't be more devastating.

Disguised as Network Neutrality, these proposed rules stand to create an Internet where the biggest producers of content like Netflix and MSNBC will pay more to push their product to wider audiences. Smaller content producers who can't afford to pay may be pushed onto a digital dirt road, unable to raise a powerful public voice online.

Unofficially, the Internet is already bursting at its digital seams with opposition to the proposed rules, calling them "fake net neutrality".  For communities of color and low income families that struggle to access the Internet in their homes, many turn to their cell phones as their primary means of Internet connection with the assistance of heavily scrutinized broadband subsidies. For these Internet users, the cost of connection is already too high.

Low-income households and Internet users of color aren't the only ones that stand to be hurt by the proposed rules.  There are smaller content providers, small businesses owned by people of color, both migrant and citizen and non-profits, whose ability to reach audiences will be significantly reduced.   Now is the time for small content providers to raise their voices, while they still can.

Inside PR at The Guardian in the Edward Snowden Era

The British/American paper The Guardian shared its recent Pulitzer Prize for public service with The Washington Post, but three people are truly responsible: Glenn Greenwald, Laura Poitras and, of course, Edward Snowden.

Since those fateful days in June when the story first broke, nearly every government in the world has faced a moment of reckoning; the revelations gradually revealed by Greenwald and Snowden have shaken the public's trust in both its elected representatives and the companies producing the technologies it uses every day.

We recently spoke to Gennady Kolker, who oversees media relations at The Guardian US, for an insider's view of the events of the past ten months.

"If you want to liberate a society," Egyptian Arab Spring activist Wael Ghonim said early in the year, "just give them the Internet."

In retrospect, Ghonim should have qualified his statement to include the kind of Internet free societies need. For as online organizing has spread across the Middle East and North Africa, governments have heightened efforts to remake digital networks as tools of censorship and surveillance.

Today, the optimism about free speech and the Internet that emerged during Egypt's 2011 uprising has been dashed by subsequent Morsi and Sisi regimes, which have silenced online and traditional media and imprisoned dozens of journalists.