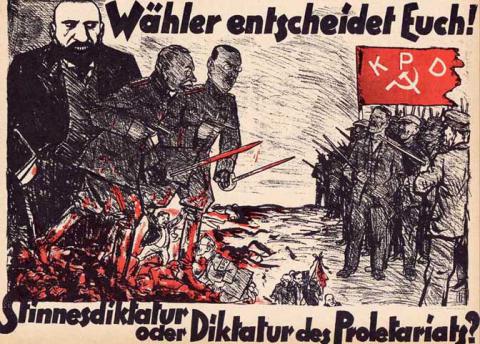 On May 28, Jacobin and the Rosa Luxemburg Stiftung-New York Office are hosting a public discussion on the future of the European Left between Bernd Riexinger, co-chair of Germany's Left Party (DIE LINKE), and SYRIZA strategist Elena Papadopoulou.

In this interview, Bernd Riexinger talks about strategic challenges facing DIE LINKE. Citing Rosa Luxemburg's idea of "revolutionary Realpolitik," he examines the current situation and lays out strategic ideas for the future. The interviewer, Luigi Wolf, starts by going back to the legacy of the "united front strategy," which was established by the Communist Party of Germany (KPD) in the 1920s, and then shifts to the challenges DIE LINKE currently faces.

The united front is actually the core concept behind Rosa Luxemburg's notion of "revolutionary Realpolitik," but it has been largely forgotten. I think it is important to revive the idea of the united front, but without ignoring the differences between the 1920s and today's society. The reason for this is that the united front was a revolutionary communist party's answer to the question of how to become a mass party. Although DIE LINKE is a left-wing reformist party, we still have to ask ourselves questions such as how are we to reach the majority of the population. How are we to relate to social democracy? How can we move away from a defensive position? How can we ensure that strategic considerations - and not just moral indignation - become the driving force behind our actions?

It is essential to develop a clear understanding of history because there are many differences between the past and today's situation. The 1920s were characterized by a relatively clear division between the workers' parties and those of the bourgeoisie. This meant that the bourgeois parties gained very little access to the workers' parties. This is very different today, and many union members now belong to the CDU or the SPD.

Back then, the German labor movement was divided into supporters of the KPD and the SPD. A major difference from today, of course, is that both parties advocated socialism: for one party this was a revolutionary concept; the other aimed at a gradual progression towards socialism through social reform.

It would be wrong to compare today's situation with the 1920s, even when discussing how we conceptualize our own party. But it is still worth examining the concept of the united front. I personally learned a lot from reading up on the KPO, which developed the idea of the united front. It was also one of the most important organizations within the KPD that supported the united front and successfully applied the concept between 1919 and 1923. This helped avert the Kapp Putsch and led to the only successful general strike during the 1920s in which this alliance actually worked in principle. Above all, however, the united front would have provided a means of fighting against fascism.

Instead of doing so, the KPD and its social fascism theory, which had a lot to do with the foreign policy interests of the Soviet Union under Stalin, completely isolated itself and even set up its own trade unions. These unions organized far fewer strikes than those of the General German Trade Union Confederation. But this was mainly due to the fact that their membership largely consisted of unemployed people.

Do you think an alternative strategy could have prevented fascism?

It is important to be clear about the fact that the KPD and the SPD were not directly responsible for fascism. However, the strategies that they implemented against fascism obviously failed. A united front strategy, aimed at establishing unity among the working class, would have had a good chance of preventing fascism. The struggle over issues concerning people's everyday lives is clearly important, and these issues provide a means of establishing unity. However, in my opinion, transitional demands also form an essential aspect of the united front.

How do these old KPD strategies relate to the current work of the DIE LINKE?

First, our relationship with the SPD is not the same as the relationship between the KPD and the SPD back then. Just as DIE LINKE is not a revolutionary party, today's SPD is very different from how it was then. But it is possible to compare certain strategic issues. One example is the question of our relation to SPD voters. The KPD's social fascism theory led it to argue that it was possible to differentiate between the members and supporters of the SPD on one hand, and the SPD leadership on the other. The theorists behind the united front followed a different approach. They still wanted to win over the Social Democratic vote for the KPD, but they realized that referring to the party's leadership as social fascists would only encourage SPD supporters to back its leadership more strongly than ever instead of rejecting it. This also explains why they insisted on calling on the SPD as a whole to participate in joint action.

It is important to remember that the grassroots also identifies with its party. Moreover, if I attack a party as a whole it becomes difficult to organize with its grassroots. Of course, calling on the SPD to participate in joint action was less about working together in parliament, and more about developing something in common with the SPD and the trade unions outside of the parliamentary sphere.

Unfortunately, apart from a brief historical phase, these ideas belonged to an absolute minority position within the KPD. There was also a Trotskyist section that developed similar approaches. But all these currents were marginalized, and later downright persecuted within the Stalinized KPD. Although the initial situation seemed very promising, it was wasted, and the KPO was unable to gain strong support for its ideas.

In Stuttgart, where I come from, the KPD had the majority in the metal workers' local delegate meetings from time to time. So at times there were quite strong links between the KPD and the unions, but these links were cut when the KPD formed its own `revolutionary' unions. And of course, how can you march together with your Social Democratic colleagues if you also insult them by calling them social fascists? Joint action in this situation was a complete illusion. I think this was a very important reason that there was no general strike against fascism, because a general strike could have only taken place if a united front had existed.

Do you think that the SPD was mainly responsible for the weakness of the German labor movement after 1929?

It is possible to accuse the SPD of a lot of things, and most of these accusations are justified. For example, the party expelled the communists from the trade unions and made no attempt to organize a general strike against the Nazis. But we really should not be complaining that the Social Democrats are indeed just Social Democrats and talk about the policies of past revolutionaries. Our criticism of social democracy also helps us remain blind to our own mistakes.

You said that the KPD assumed that it would be able to drive a wedge between the grassroots and the leadership. On the one hand, the KPD viewed the united front as an approach that helped develop discussions about specific demands, and on the other, it was a tactic to win over the social democratic workers. So although the aim was to set up joint activity, this was organized by the KPD as a means of triggering certain experiences.

Which form of joint political activity between socialists and non-socialists might the united front adopt today? And would a united front be a useful tactic for DIE LINKE to win over supporters of the SPD?

I would argue that this is not just about tactics. It is also about understanding that political consciousness does not develop through political agitation but through experiences that are then consciously processed by those involved. We will not win over the people just because we make the right demands. It should be clear that agitation does not necessarily move society towards the left. If left-wing politics is to be emancipatory, it must rely on the involvement of the people and their moves towards self-emancipation. This means that left-wing politics must empower people to stand up for their own interests and to understand politics as something that not only affects their lives, but as something that they are also involved in. People need to become the subjects of politics, not objects to be persuaded by something.

When people participate with us in strikes or demonstrations or support certain policies, they also go through specific processes of learning that they then interpret in certain ways. One of the most important goals of politics needs to be that people develop such experiences. If we take a more historical view, the point is that people become political subjects through class conflict; in other words, people become political subjects when they start to stand up for their own interests. As part of the Left, we can play a useful role in this process by carrying out responsible and consistent struggles. But we also need to organize these learning processes, and doing so needs to form part of all our campaigns and analyses.

To a large extent, the united front strategy was a means of developing such experiences. The assumption behind the united front is that during union disputes or struggles against cuts to social spending, the Social Democrats have the same interests as us. Clearly, we need to learn from campaigning itself as to how we can organize joint struggles. I think this is still important today, and not only in terms of our relations to the SPD.

[Bernd Riexinger is, together with Katja Kipping, co-chair of DIE LINKE.]

This interview is co-published with Rosa Luxemburg Stiftung-New York Office.