Walmart workers and supporters in the labor movement say they plan a new series of protests over wages and conditions at America's largest private employer, in which they will target the firm's family-friendly ethic ahead of its annual shareholders meeting next week. Hundreds of mothers who work at stores across the US plan a number of strikes in 20 cities nationwide. Others will travel to Walmart headquarters in advance of the upcoming shareholders' meeting next week. 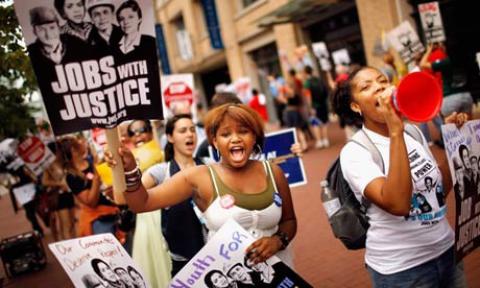 Walmart workers and supporters in the trade union movement say they intend to stage a new series of protests over wages and conditions at America's largest private employer, in which they will target the firm's family-friendly ethic ahead of its annual shareholders meeting next week.

Hundreds of so-called “Walmart moms” who work at stores across the US plan a number of strikes in 20 cities nationwide. Others will travel to Arkansas, the company’s home state, to provide a visual presence to shareholders, workers’ rights groups said on Thursday.

The actions will follow a series of “Black Friday” rallies last year, which came after a House of Representatives committee report found taxpayers were subsidising workers at just one Walmart store to the tune of $1m a year in food stamps and other public-assistance programmes, because of the low wages they took home.

Walmart, which is coming in for increasing criticism over its treatment of staff and other issues, most recently for how it handled an overseas bribery investigation, is expected to face close scrutiny from shareholders after this month posting a fifth-straight quarter of negative same-store sales.

The company made a $16bn profit last year; the Walton family, which owns more than half of Walmart, is worth almost $145bn. The company pays 825,000 workers, around two-thirds of its workforce, less than $25,000 a year.

The campaigners, who include current Walmart workers as well as members of the alliance Our Walmart, are demanding wages of more than $25,000, more full-time openings and an end to retaliation against workers who speak out against conditions.

Earlier this year, the National Labor Relations Board filed a complaint against Walmart for, it said, illegally retaliating against 60 workers who had engaged in legally protected strikes or protests.

At a press call organised by Our Walmart on Thursday, two mothers spoke of their struggle to bring up their families on the low wages they were paid by the company. One said she supplemented her low wages with food stamps. They stressed they were “not anti-Walmart” and appreciated their jobs, but wanted the company to publicly commit to changes that would help working families.

Linda Haouska, 52, a mother of two from Illinois who has worked for Walmart for eight and a half years, said her son told her he would forego his prom night because he knew she could not afford to rent him a tuxedo.

“That is no conversation that a mother, especially one working for a company as successful as Walmart, should have with her child,” said Haouska. “We are helping our company make $16bn annual profits, we are helping the Walton family with their [$145] billion.”

Haouska said Walmart claimed to be a “family orientated company”, yet it would not provide fixed schedules or guaranteed full-time work for many mothers who work there; she added that she had a fixed schedule, because she worked a night shift.

“We are Walmart moms, we are not a political cause, we are real people who are struggling to provide happy stable homes for our kids,” she said.

Lachandra Myrick, a mother of two who has worked at a Walmart store in Illinois for almost a year, said she earned $375 every two weeks, relies on food stamps to get by and is trying to find scholarships and grants to get her son through school. She recently took on a night-shift job and said her daughter wears hand-me-downs and she has to choose between buying shoes for her son or her daughter.

“Working at Walmart, taking care of my family is hard and nearly impossible” Myrick said. She plans to take part in one of the strikes next week.

Ellen Bravo, the executive director of Family Values @ Work, a group that advocates for policies such as paid sick days and family leave insurance, said many mothers were struggling to provide for their families and accused Walmart of “creating a financial crisis for many families in America”.

Also on Thursday, Walmart hit out at a proxy advisory company, Institutional Shareholder Services (ISS), which had urged shareholders to vote against its executive compensation package and to vote for an independent chairman. ISS had cited a failure of the board to provide shareholders with specific information related to the bribery investigation outside the US.

Our Walmart has had some recent successes with campaigns to press for changes at the company. Following a campaign on pregnant women's rights, Walmart changed its policies to allow pregnant women to be given less physically demanding duties.

Walmart's shareholders meeting is on Friday 6 June at the University of Arkansas, in Fayetteville.