Hamer’s inclusion of sterilization in a hearing primarily organized to ensure the protection of Mississippi Freedom Summer volunteers and lay the groundwork for the 1965 Voting Rights Act highlighted how both the right to vote and reproductive freedom were necessary for justice for Black women in Mississippi. 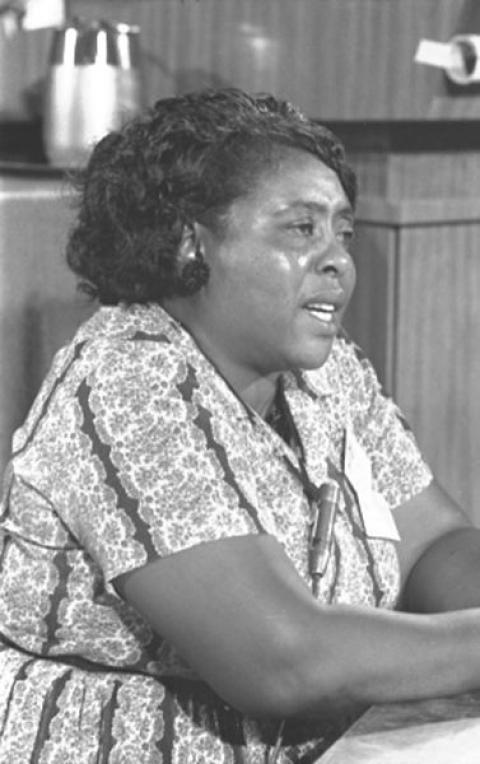 Fannie Lou Hamer used the power of storytelling to compel America to recognize the humanity of poor Black people in Mississippi. , Wikipedia Commons

This piece is published in collaboration with Echoing Ida, a Forward Together project.

This June marks the 50th anniversary of Mississippi’s Freedom Summer—a campaign launched to end the systematic and violent disenfranchisement of Black people in Mississippi by registering them to vote. This effort was not only to draw national attention to the terror Black people experienced as they fought for their right to vote, but also to cultivate the organizing skills of a network of local leaders.

Fannie Lou Hamer was one of those leaders. She used the power of storytelling to compel America to recognize the humanity of poor Black people in Mississippi.

This is also the 50th anniversary of Fannie Lou Hamer sharing her experiences on a national stage during her testimony at the Council of Federated Organizations’ sponsored hearing at the National Theater in Washington, D.C. She shared the brutal injustices she suffered for trying to vote, as well as the injustices of forced sterilization of Black women in Sunflower County, Mississippi. Hamer’s inclusion of sterilization in a hearing primarily organized to ensure the protection of Mississippi Freedom Summer volunteers and lay the groundwork for the 1965 Voting Rights Act highlighted how both the right to vote and reproductive freedom were necessary for justice for Black women in Mississippi.

Fifty years later, we have seen a separation of voting and reproductive rights in mainstream movements that has only accelerated Mississippi policymakers’ transparent attempts to roll back the gains of Freedom Summer, through aggressive legislation to institute voter identification laws, close the state’s only remaining abortion clinic, and generally limit the reproductive choices of Mississippi women.

The zealous legislature has successfully launched a multipronged attack of reproductive and voter suppression that endangers the already precarious livelihoods of Mississippi’s Black women and families. As advocates, our demand for justice must also be multipronged to avoid a return to dehumanizing policies that Hamer recounted during her testimony.

In her testimony, Hamer connected reproductive rights and enfranchisement. She revealed:

One of the other things that happened in Sunflower County, the North Sunflower County Hospital, I would say about six out of ten Negro women that go to the hospital are sterilized with the tubes tied. They are getting up a law that said if a woman has an illegitimate baby and then a second they could draw time for six months or a five-hundred-dollar fine. What they didn’t tell is they are already doing these things, not only to single women, but to married women.

As Hamer noted, in 1964 the Mississippi House of Representatives passed a sterilization bill that would criminalize women for having children by fining or imprisoning women who birthed children while unmarried; women could elect to be sterilized in order to avoid imprisonment and/or the fine. Though the legislation explicitly targeted unmarried women, many poor Black women had already fallen victim to involuntary sterilization regardless of their marital status. Fortunately, the bill died in the state senate because of pressure from national media outlets and the work of the Student Nonviolent Coordinating Committee. Still, modern Mississippi freedom fighters must remain committed to Hamer’s legacy of bridging voting and reproductive rights into a comprehensive reproductive justice effort to protect Black women and other populations that are vulnerable to violations of both.

Attempts to transform the state’s social reality into one that mirrors what Hamer spoke of 50 years ago were on full display in the 2011 election, when two ballot initiatives attempted to limit the voting power and reproductive decision-making of Mississippi families. Initiative 26, a “personhood” initiative, sought to define life at conception, thus outlawing abortion by deeming it homicide, while Initiative 27 sought to require potential voters to present photo identification at all polls in the state. The “personhood” bill was voted down by more than 55 percent of voters, but the voter ID initiative passed.

The voting law takes effect across the state during the upcoming June 3 primary election and stands to disenfranchise some 48,000 low-income Mississippians. Because voter ID laws disproportionately disenfranchise the poor through cost and geographic barriers to access, more than 35 percent of Black and Latina women living in poverty in Mississippi face compounding disadvantages at the hands of this legislation. This systematic disenfranchisement, reminiscent of the Jim Crow South, limits these women’s ability to use their constitutional right to vote against oppressive legislators who prioritize conservative, restrictive ideology over their health and well-being.

Though “personhood” failed in Mississippi in 2011, Gov. Phil Bryant has made it very clear that he is committed to ending safe abortion access in the state, and the actions of the legislature reflect his commitment. While it is unclear if the sole abortion clinic will survive the ongoing appeals process of legislation that requires each of the clinic’s physicians to have admitting privileges at a local hospital, Bryant has signed a law that regulates women’s access to medication abortion. The law requires a doctor to be present while a patient takes the medication, rather than allowing a patient to simply receive a prescription and take it in the comfort of her own home. This means that women who do not live in close proximity to a clinic and cannot travel there multiple times may be forced into a surgical abortion option or they may eschew an abortion altogether. Bryant also recently signed an 18-week abortion ban, which unconstitutionally restricts women’s reproductive health.

The barriers erected by the aforementioned legislation will be greatly exacerbated if the state’s abortion clinic loses its appeal and closes. Women seeking abortions will ultimately have no choice but to leave the state to receive an abortion, which is often unfeasible for poor women, especially those in rural areas who lack the transportation, money, and job flexibility to take a multiday, out-of-state trip during the week. And because of the new voter restrictions, these same women, who are the most vulnerable and in the greatest need of legislative change, may lack the ability to exercise their voting power in pursuit of that change.

State lawmakers need to trust Mississippians to make healthy decisions for their families.

With little voter accountability, Gov. Bryant continues to roll back programs that would help low-income families support the children they have, despite his crusade to protect the “unborn.” Bryant and other Mississippi conservatives have blocked Medicaid expansion that would have insured an additional 300,000 low-income people. Then, they will subject TANF (Temporary Assistance for Needy Families) recipients to drug testing, if the state deems them likely substance users based on a questionnaire. Given the country’s history of deploying stereotypes against Black women, this legislation will likely fall hardest on them. If recipients test positive more than once, their benefits will be disrupted, thereby adversely affecting children whose parents struggle with substance use. In 2013, Mississippi also spent $1.6 million on the e-Childcare system, which forces parents who receive childcare vouchers to scan their fingers to monitor their child’s daycare attendance. If the child misses more that 15 days in the fiscal year, parents will lose their vouchers. These laws may not be as harsh as the sterilization bill, but they still endanger Black women and their families, who are at greater risk of losing equal voting and reproductive health access.

Fifty years later, national civil rights leaders are returning to the state to advocate for freedom, but they must remember that Mississippians do not live single-issue lives. It is critical that organizers build and strengthen resources across movements in Mississippi to fight back against laws like these that perpetuate systematic oppression on many levels, continuing to disadvantage poor families of color. National organizers also have to trust Mississippians to speak the truths that can only come from being rooted in these communities.

For Fannie Lou Hamer, reproductive freedom was always a part of Freedom Summer, and it is time we follow her lead. Activists must commit to the intersection of race and gender politics, examining both voter and reproductive injustices since they affect the same vulnerable populations. Our resistance to these violations must be as coupled, complex, dedicated, and fierce as our oppression if we are to succeed. The 50th anniversary of Freedom Summer and Fannie Lou Hamer’s testimony is the perfect time to recommit ourselves to this approach.

[Jazmine Walker, writes the Furious and Brave column. She is a big fine woman who specializes in reproductive justice and agricultural economic development in the rural south. She came of age in a largely Black working class community in Mississippi's state capital. She has earned a Master of Arts degree in Sociology and has interned for SisterSong: Women of Color Reproductive Justice Collective, where she worked on projects related to not only reproductive health, but also issues that impacted communities of color. Her dedication to public scholarship and activism is driven by a passion to amplify feminist and reproductive justice discourse around black women and girls, especially those in Mississippi. You can also find her blogging at Still Furious & Brave and in collaboration with Echoing Ida, a Forward Together project.]