As the incomes of the 25 best-paid public university presidents soared, the livelihoods of their faculty deteriorated. This deterioration resulted largely from the fact that tenured and tenure-track faculty were replaced with adjuncts (part-time instructors, paid by the course) and contingents (temporary faculty). Many adjuncts have incomes below the official poverty level and receive food stamps. 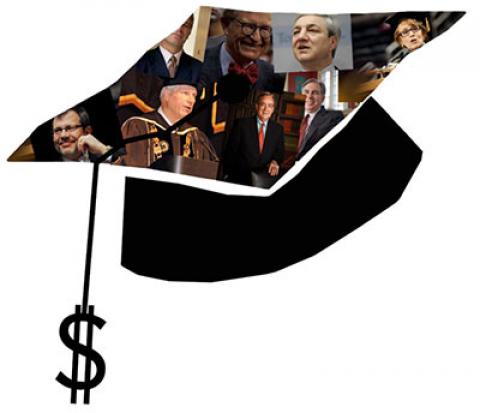 A report just issued by the Institute for Policy Studies―The One Percent at State U―indicates that it is. Surveying public universities, the report finds that the 25 highest-paid presidents increased their income by a third between fiscal 2009 and fiscal 2012, bringing their average total compensation to nearly a million dollars each. Also, the number of these chief executives earning over a million dollars in 2012 more than doubled over the previous year. In 2013, the best-paid among them was E. Gordon Gee of Ohio State University, who raked in $6,057,615 from this employment.

Nor is it at all clear that the top income recipients at universities merit their extraordinary compensation. Graham Spanier, the highest-paid public university president in 2012 (Penn State, $2.9 million), was fired from his post for his apparent role in the cover-up of sexual abuse of children by his university’s assistant football coach. E. Gordon Gee, the highest-paid public university president in 2013, resigned his position amid a trustee uproar over his disparaging remarks about Catholics.

Meanwhile, as the incomes of the 25 best-paid public university presidents soared, the livelihoods of their faculty deteriorated. This deterioration resulted largely from the fact that tenured and tenure-track faculty were replaced with adjuncts (part-time instructors, paid by the course) and contingents (temporary faculty). Median pay for adjuncts in the United States is reportedly $2,700 per course, forcing them to cobble together enough courses or jobs to ensure their survival. Many have incomes below the official poverty level and receive food stamps. As for contingents, they face low pay, few if any benefits, and no job security. In recent years―as the income of the 25 best-paid public university presidents grew dramatically―their hiring of adjunct and contingent faculty far outstripped their hiring of regular faculty at their institutions. Consequently, although tenure and tenure-line faculty at these 25 universities outnumbered contingent and part-time faculty prior to the fall of 2009, the situation was reversed by the fall of 2011.

Of course, this change in the working conditions and economic circumstances of college and university faculty is not unusual. In 1969, tenured and tenure-track faculty comprised 78 percent of all instructional staff in higher education. Today that situation has been turned on its head, and the American Association of University Professors estimates that 76 percent of college and university instructors are contingents, adjuncts, and graduate students. Consequently, most college and university teachers are now in an economically marginal status. The plight of the faculty is particularly remarkable at the 25 public universities with the highest-paid presidents, where its growing marginality occurred in the context of soaring incomes for the top administrators.

And the inequality may be even greater at private universities, where a great many more presidents have outlandish incomes. According to the data provided by the Chronicle of Higher Education, there were fourteen times as many private as public university presidents receiving more than a million dollars each in 2011 (the latest year for which statistics seem to be available). Consequently, the enrichment of top administrators, coupled with the shift to adjunct and contingent faculty, means that economic inequality is thriving on private campuses, as well.

Students comprise another university constituency that is faring poorly. The rapidly-rising tuition at public and private institutions has sent student debt climbing to unprecedented levels. In 2012, students owed a staggering $1.2 trillion, an amount that surpassed Americans’ credit card debt. Indeed, it is estimated that, in 2013, 71 percent of college seniors who graduated had student loan debt, with an average of $29,400 per borrower. Meanwhile, university spending on scholarships lagged far behind spending on non-academic administration, such as executive administration, general university administration, legal and fiscal operations, public relations, and development. Between fiscal 2007 and fiscal 2012, the University of Minnesota-Twin Cities reduced spending on scholarships by 55 percent while increasing spending on non-academic administration by 44 percent.

Looked at in the framework of individual campuses, it is a disturbing picture.

From fiscal 2010 to fiscal 2012, Ohio State paid its president a total of $5.9 million. Student debt soared, rising 46 percent from summer 2006 to summer 2011. From fall 2005 to fall 2011, the number of adjunct and contingent faculty increased 62 percent―nearly three times faster than the national average.

In fiscal 2012, Penn State awarded $2.9 million in salary and severance pay to its disgraced president. From fiscal 2006 to fiscal 2012, it provided another $4.8 million in executive compensation, while student debt grew by 49 percent.

From fiscal 2010 to fiscal 2012, the University of Michigan paid its top executive more than $2.6 million. The number of its adjunct and contingent faculty grew by 1,777, or 64 percent, between fall 2005 and fall 2011, and by the summer of 2012 student debt was well above the national average.

Overall, then, higher education seems to be following the general pattern of modern American life―one that favors the wealthy at the expense of everyone else.

Dr. Lawrence Wittner (http://lawrenceswittner.com) is Professor of History emeritus at SUNY/Albany. His latest book is a satirical novel about university corporatization and rebellion, "What’s Going On at UAardvark?"