Spot-on, After All These Years

A hundred years after publication, the central message of this British classic still rings true . . . These fictional but very representative working people are under the thumb of papers such as the Daily Obscurer and the Weekly Chloroform; attend the Church of the Whited Sepulchre; work for bosses named Sweater, Makehaste, and Slogg; elect a town council comprising "The Forty Thieves"; and have daughters who work as maids for the likes of Mrs. Starvum and Lady Slumrent. 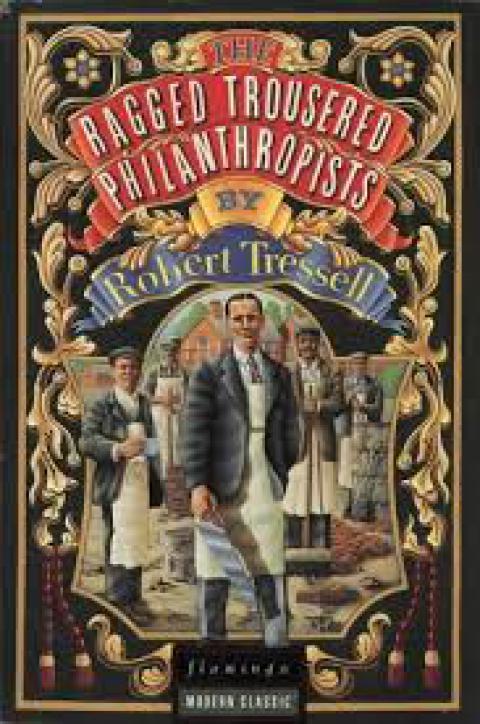 The Ragged-Trousered Philanthropists
By Robert Tressell

[moderator: this book is available for download free of charge in several formats on the Gutenberg Project at http://www.gutenberg.org/ebooks/3608]

We don't think of philanthropists as ragged: louche, maybe even a tad shabby, as with trust-fund hipsters or Palo Alto billionaires, but never ragged. In writing his early-twentieth-century British classic, The Ragged Trousered Philanthropists, Robert Tressell (the pen name of Robert Noonan) wanted to drive home his point. The biggest benefactors of the rich are workers. His is a portrait of hard-pressed working people and their counterintuitive respect and political and economic support for their rulers.

Tressell's figures, drawn from his own experiences as a house painter and sign writer, not only accept the social order and its extremes as natural and inevitable, but think that only slackers complain about the pitiless hard work and early deaths.

A hundred years after publication, the central message of the book rings true. It was an instant success in 1914 and remains the pre-eminent novel of the British working-class left. The full manuscript was first published in the United States in 1962 and was reissued in the United Kingdom with new material in 2010. Largely autobiographical-the subtitle reads,"Being the Story of Twelve Months in Hell, told by one of the damned, and written down, by Robert Tressell"-- it's a curious and successful amalgam of art and socialist propaganda.

The descriptions of working-class life, including everyday interactions and the physical conditions of workers' homes, show an eye for detail that rivals Henry James and the best ethnographies. The book centers on a group of house painters, skilled workers who are underpaid, poorly educated, and always in debt-for necessities, not luxuries. Beaten down as they are, they still vote for their bosses' two parties-in their day the Tories and Liberals (the newly emerging Labour Party was still a minor player).

These fictional but very representative working people are under the thumb of papers such as the Daily Obscurer and the Weekly Chloroform; attend the Church of the Whited Sepulchre; work for bosses named Sweater, Makehaste, and Slogg; elect a town council comprising "The Forty Thieves"; and have daughters who work as parlor maids for the likes of the harridan Mrs. Starvum and rentiers like Lady Slumrent. The most boss-friendly toadies are named Crass and Slime.

Frank Owen, the book's protagonist, works as a house painter and, as a socialist, tries with little success to get the others to see that they are playing a mug's game (hence the name of the fictional town, Mugsborough). His fellows regard him "as a bit of a crank; for it was felt there must be something wrong about a man who took no interest in [horse and dog] racing or football and was always talking a lot of rot about religion and politics."Some of that "rot" was Owen's view of capitalism as "one big Swindle," where the "unnatural order" may claim affinity with Christian communal values but only rewards those who act like feral lone wolves, because the logic of the system demands selfishness.

"We must be selfish or we shall be hungry and ragged and finally die in the gutter," Owen notes. "The more selfish we are, the better we will be. In the `Battle of Life,' only the selfish and cunning are able to survive; all others are beaten down and trampled under foot."

During one lunch break, Owen is coaxed into revisiting what his mates think is the outrageous claim that lack of money is not the cause of poverty, and his response-without using the words"exchange value" or "surplus value" or citing Karl Marx-shoots down the idea that socialism is about sharing or about putting more money into circulation but is instead about "discovering the reason why there is not enough produced for everyone to enjoy abundance." So, poverty is not the lack of money: "it consists [instead] in a shortage of the necessaries of life-or rather, of the benefits of civilization."

Too much propaganda and too little art? Tressell gets the balance right, I think. He writes in his introduction that his work "is not a treatise or an essay, but a novel," and that his aim was "to write a readable story full of human interest and based on the happenings of everyday life, the subject of Socialism being treated incidentally." Also repeatedly and essentially, but applied with an exacting brush, not a trowel.

Michael Hirsch is a labor journalist, political writer, and member of New York DSA and the Democratic Left editorial committee.